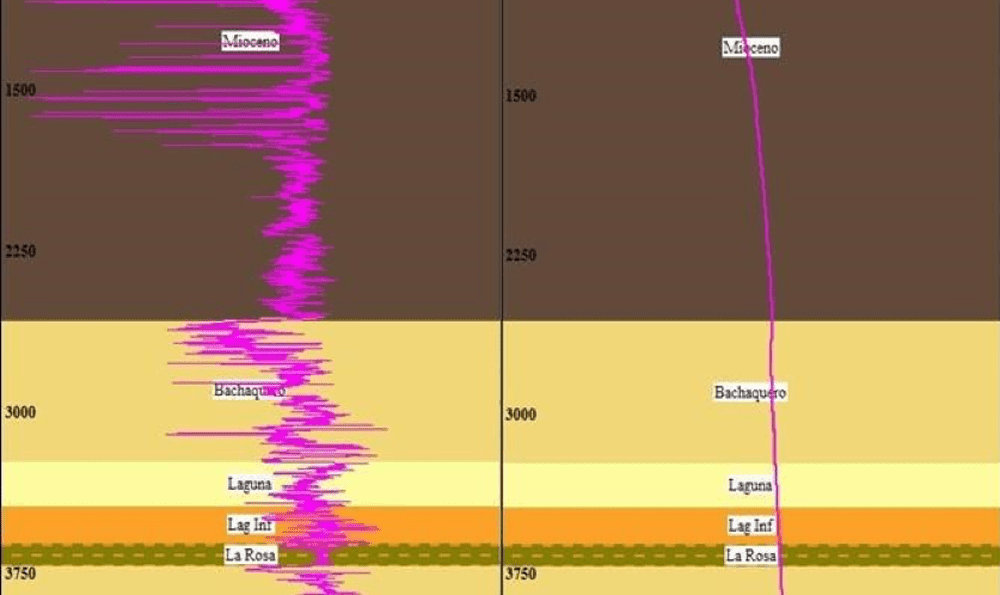 Hydraulic fracturing is a highly practiced branch of the production discipline that is commonly used in sands with low permeability. Sometimes it is used for sand control operations and, in other cases, to increase production when it goes down.

The functional principle of fracturing consists on using fluid at a higher pressure than the breaking strength of the rock, and later filling this opening with proppant material (the one that sustains the fracture) to avoid its closure. The simplicity of the process does not reflect the difficulties that could appear in the way, because when talking about rocks, we also talk about a natural material that is not homogenous.

The first recorded fracturing was carried out in Kansas, in 1947. After the positive results were obtained, it became the perfect option to increase production quickly. Over time, improvements in the fracturing process began to appear, so did larger pumps, deeper depths reached, the fracturing fluid ceases to be only water and the proppant stops being only sand.

In addition to this, the fracture plans are coordinated by specialists with the creation of software that predicts the possible behavior of the rock. In turn, with the introduction of more technologies and professionals, the costs to fracture reach figures from $800,000, in simple cases, and $3,000,000 in more complicated cases with multiple stages.

In spite of all this effort, it becomes impossible to completely correct the fractures, since currently there isn’t any mathematical complete software that can iterate the necessary times to predict the behavior of the rock before the pressure.

However, there is more than one way to practice hydraulic fracturing. As a case study, here is an analysis for fracture optimization using geomechanics as spearhead. It takes place in west Venezuela, specifically in an important field that carries oil with 24 API° quality. The target deposit has petrophysical characteristics that do not allow the natural flow of crude oil.

Its porosity is near 15 percent but with a permeability of approximately 8 cps, which makes it a perfect candidate for fracturing. Despite having more than 30 wells fractured in the past, you cannot find one whose fracture lasts more than 1 month open.

In addition to the aforementioned conditions, this particular reservoir has a geological feature known as migration, a process in which the target sand rises. In this case the migrated sands are eocenic, being originally in the past to depths between 12,000 ft to 15,000 ft; and they’re today at 4,000 ft, maintaining part of its characteristics as hardness, resistance, among others.

Using the Marcelo Frydman methodology, the progress goes in the acquisition of data where a post-mortem analysis of fractures previously practiced was constructed, detailing what type of fluid, proppant and pressure were used.

With this information it was possible to know that the fluid commonly used was water and the proppant was sand, due to the age of the fractures.

From the structural model and analysis of drilling events, it was possible to identify important quantities of events that were repeated when drilling. It was also detailed how the formations were arranged layer by layer, understanding the migration effect suffered by the deposit.

With the stratigraphic mechanics, thin sections were practiced, which is the microscopic analysis made directly to the core extracted from key wells in the deposit, noting the grain arrangement, the size of grains, and how the formation was supported, resulting in supported grain.

It can be inferred from the size and type of grain what type of proppant should be used. With an average size of 15 microns, it makes reference to a fine sand type, therefore the proppant size should be close to 15 microns to avoid plugging in the pore throats built with fracturing.

For the overburden pressure analysis, we used the available petrophysical records. In the following image (Chart 1) you notice how the reading of the density record (left) has a significant change in behavior when entering the target area Eocene, due to the migration phenomenon mentioned above.

With the result of the OBG (overburden gradient), the impact of the sands formation migration is noted because the density is greater, so there is an overload pressure much higher than expected at this depth.

Above (Chart 2), you can see the compaction train calculated with the available sonic registers (left), and the final result of the pore pressure.

Since there was a significant number of well cores in the deposit area, geomechanical tests were carried out in the rock mechanics laboratory Miguel Castillejo at the Central University of Venezuela, with the support of Dr. Castillejo.

To the different samples already cut, analyses were carried out as the following:

Brazilian test: This is practiced to know the resistance to stress the rock has, an important value at the time of hydraulic fracturing, since it allows to know how the rock will behave after breaking.

Unconfined Compressive Strength (UCS): The exercise of submitting the core to a charge without confinement in order to know the resistance to the axial pressure the rock has, by contributing the values of the Poisson coefficient. This helped to know if the anomalous overload pressure where the target formation exposed was affected. The result was negative, since being an Eocene rock, the Poisson coefficient obtained was 0.33.

Triaxial tests (TRX): This test is practiced to simulate the reservoir pressure. The sample is confined and receives both vertical and horizontal pressure to obtain the value of the Young’s coefficient. In this case, it was used in an axial pressure close to the overburden to which the rock is subjected in the subsoil; which progressively increased the horizontal pressure to simulate the reservoir pressure and, subsequently, the amount of pressure necessary to propagate a hydraulic fracturing of the rock and the Young coefficient 0.63 x10 (6) psi. 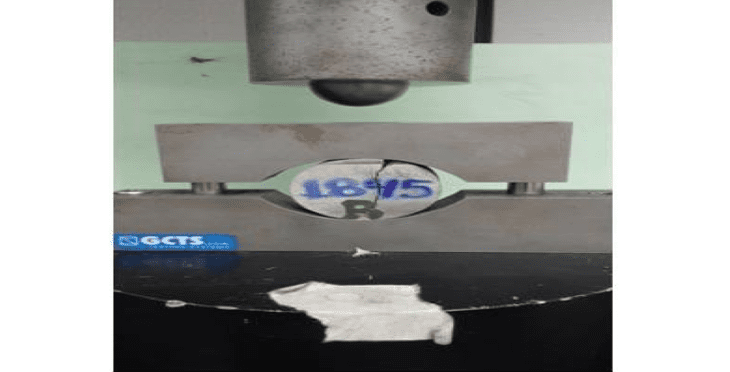 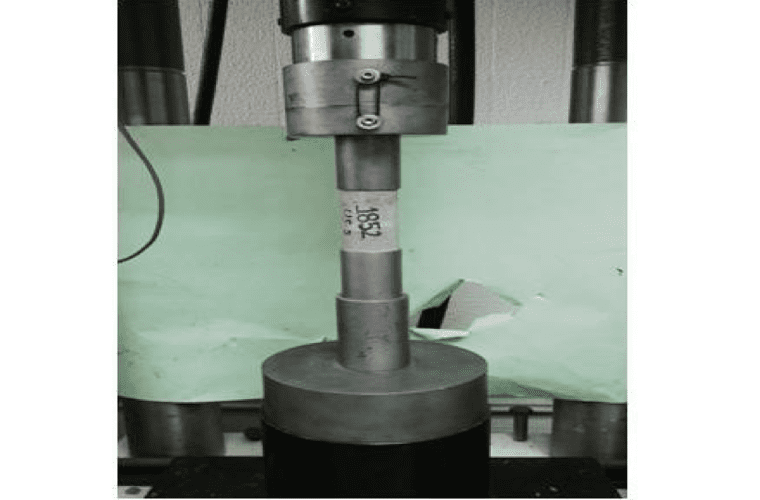 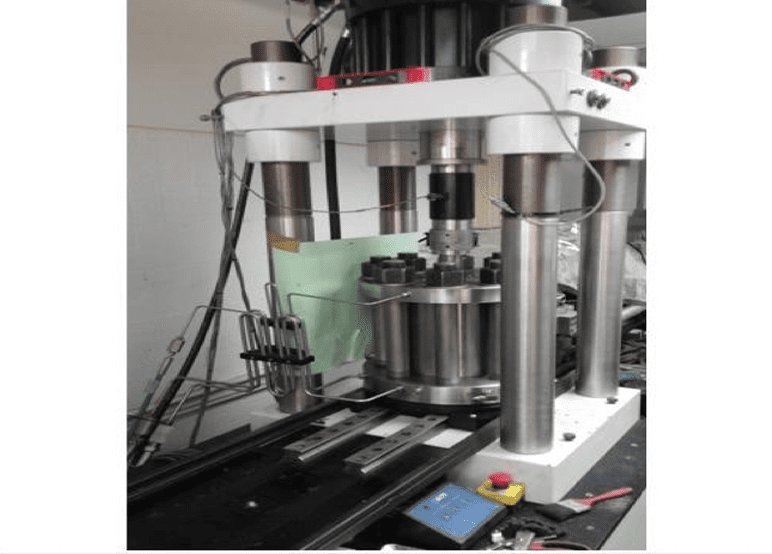 These results allow us to know what type of rock it is. The logic indicates that, since it is a rock belonging to the Eocene, it must be consolidated; but the results showed that it isn’t.

Since there is an unconsolidated rock, fracturing processes change drastically. Another non-standardized test was carried out and, when rubbing the rock with the fingers in the broken sectors after the tests, an easy detachment of the grains was observed, which points at a low cohesion of the rock. This answers why, despite being Eoceanic, it is an unconsolidated rock.

In the following steps the geomechanical model is concluded, obtaining the effort directions that allow to choose in which direction fracturing should be practiced. The theory orders that it fracture in the maximum direction. The value of the minimum effort (Sh) was also obtained, and the value of the maximum (SH) was estimated, and with the failure analysis using the Mohr Coulomb theory it was shown that the rock has a low cohesion.

With the results obtained at the end of the geomechanical model, it can be seen how several questions around the fracturing were answered.

In reference to the deposit geological conditions, it is noted that, in spite of migrating the formation and changing depth, it kept its main characteristics. The key formation efforts obey a normal regime, so the best way to practice the fracture is in a vertical well.

To select the fracture fluid, it is necessary to take into account the formation low cohesion, since a very invasive fluid can cause sandblasting after fracturing. This sandblasting process was observed in the post-mortem analysis that took place in the beginning.

A foam fluid of low density stands out as the best option, in addition to a proppant with high resistance as a ceramic type, because the formation has a significant overload effort added to the minimum effort. The aim is to avoid a Crushing effect (the pulverization of the proppant due to pressure conditions).

With all of this it is possible to demonstrate that, although fracture simulators do not work properly in this case due to the abnormal conditions that this deposit presented, other disciplines such as geomechanics can provide a safer way for successful fracturing, and thus take care of the investment that the oil and gas industry undertakes in this method of stimulation.