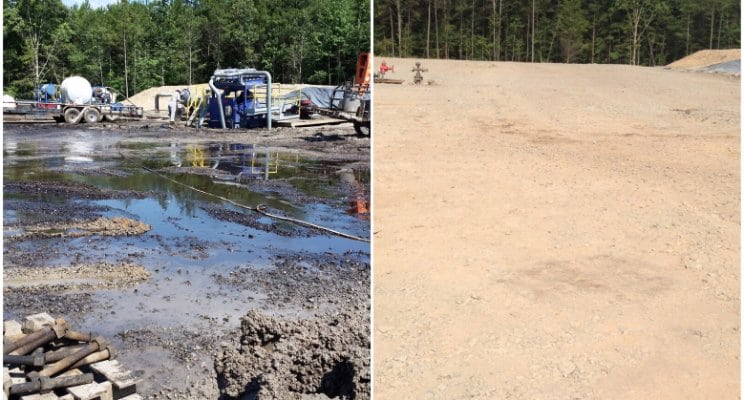 A little over 15 years ago, Steven Tidwell, who then was a farmer just trying to make ends meet met an entrepreneur who developed an innovative product with a wood-burning stove and insulation. This little design became the simple baseline for a product that could trap hydrocarbons and revolutionize the oil and gas industry.

Tidwell’s father, who had just retired from Schlumberger, immediately saw the benefits of this product in the oil and gas industry. The two decided to put on another hat and became a father and son duo in the oilfield service industry. Their story is just another example of how agriculture and energy continue to work hand-in-hand with farmers, ranchers and landowners. The Tidwells are still helping oil and gas companies across the Southern U.S. fifteen years later, even with the ups and downs of oil prices.

“We built our company off hard work and reputation,” Tidwell said. “We first started this company out to be successful on a local level.”

Tidwell added that the fact that his father built a strong local company with a good reputation was not lost on him either, especially when the thoughts and conversations of growth and expansion came about.

“Being the son, I had bigger aspirations and more time to work with so we looked [at] doing bigger and better things with the product,” Tidwell said.

Fifteen years later, Tidwell has been working for some of the biggest names in energy—midstream, upstream and downstream.

Tidwell’s recent growth seems to focus around a couple of main areas within the industry, stemming from oldfield and hydrocarbon remediation. But one of the recent catalysts for his growth has been cost.

“As most people would know, if you have been in the industry and you work in the industry then you know the number one is the cost,” Tidwell said. “Not only the cost to remove it, but there is also a big problem with overpricing certain materials on the job.”

Tidwell continues and clarifies his comments further regarding how there are certain hard costs that are relatively known industry-wide, like remediation. However, the devil can always be in the details, like labor and equipment use.

“The traditional method of actually remediating a job site would be to dig and haul and that brings in a great deal of men, labor hours, heavy equipment and materials. You can see where over-billing or rounding up can occur,” Tidwell said. “And this was before we started looking at contaminated materials and transportation cost savings.”

According to Tidwell, once you leave a site with contaminated material, you have to keep a paper trail for regulators. This can often increase more labor hours and transportation costs too.

“Labor costs have been a big problem when dealing with remediation and we feel like we spearhead some of the savings in the cost of remediation with our innovation and proprietary product,” Tidwell said.

“One of the more common types of In Situ remediation is a microbial,” Tidwell said. “This is a bug that is instituted into a liquid which is then dispersed over an area of contaminated soils or materials.”

After discussing the cool factor behind man discovering the ability to use a living organism to clean up a contaminated area, Tidwell began explaining why that living technology has been surpassed by a new environmental innovation.

“One of the issues with microbials is that it is a living organism so you have to keep that living organism alive,” Tidwell said. “If the pH level in the soil is really high, you are going to kill the bugs and you’ve just wasted a lot of money with the microbial and labor. And on the flip side, when it does work, it has maintenance.”

Tidwell offered several other costs and logistical examples indicating more signs of the energy evolution powered by innovation. He also noted one of their biggest challenges over the past several years is educating the industry on a new way to clean up spills.

“If you are trying to bring in a new product to the industry, and such a large industry like oil and gas, it strings and takes a lot of knowledge and experience to get to the point where you can talk to the environmental people,” he said. “That way, they have the knowledge they need because they have certain regulations and stipulations they have to go by.”

After 15 years of educating the industry and having their product tested over and over, Tidwell is enjoying some beyond-local growth. He thinks some of that credit should go to his company’s ability to communicate and work with regulators.

“Coming from an agriculture background, I understand the need for regulations and believe in environmental quality,” Tidwell said. “In fact, for one of our customers we did a job in a national forest, which you can imagine how much tighter the regulations are there. But in one day we’re able to take a large amount of black oily dirt, turn it back to its original color, and put it back in the hole by the end of one day.”

Tidwell was quick to point out that many stars were aligned on that particular day in order to get an entire job done in one day, citing an average job time would be three days. Still, even at three days, it is much faster than the old technology that takes several weeks.

Citing that every job is a little different and some of the techniques can sound technical, Tidwell accepts the fact that any job in today’s ever-changing oil industry may still become a little bit of Environmental University. However, it’s that slow and steady wins the race approach that America was built on.

“When we first started out 15 years ago, we were a small local company that was fortunate enough to be working for some of the top companies in the industry,” Tidwell said. “Here we are 15 years later and they still use us.”