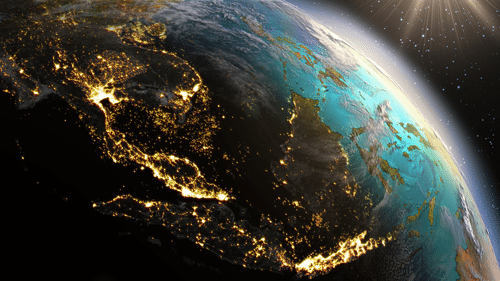 Information is the most valuable commodity. The accuracy and speed with which information can be assimilated will determine which companies succeed and which companies fail. Ursa Space Systems Inc is a blossoming company which has developed an algorithmic technology that can derive valuable information from images taken by satellite radar.

The Ithaca, New York-based firm was founded in 2014 with a vision of building “a small constellation of radar satellites,” said Julie Baker, a co-founder and data platform lead at Ursa. However, the firm soon realized that it could satisfy customer needs now by using radar imagery from existing satellites, while building its own satellites.

By using satellites equipped with synthetic aperture radar (SAR), Ursa is able to penetrate clouds or the night sky to obtain high-resolution, information-filled images. SAR is an alternative to optical imaging technology, which, like a camera, can only take images in prime conditions, not when it is cloudy or when there are other unfavorable conditions. Ursa then processes the radar images using its data platform to produce useful information.

Currently, Ursa tracks oil tank measurements to identify changes in oil reserve levels, the number of cars in a parking lot and, the change in that number over time, and ship monitoring, which is able to identify any ships in a particular area even if the vessel is not broadcasting an AIS signal. Alec Mitchell, the lead for market analysis at Ursa, said that these applications were the first to be developed because customer outreach programs indicated a great desire for them.

Mitchell stated that the concept of oil-storage monitoring, in particular, garnered a “tremendous amount of interest” because of the value of the accurate, real-time information which Ursa could provide. This is especially pertinent today because of the oil supply glut that has been plaguing the global markets since 2014. “Trying to predict the shift in the current crude market is extremely difficult,” said Mitchell. “What we’ve developed here is an ability to image any location in the world to measure crude oil storage tanks with up to 98% accuracy.” Ursa now creates weekly reports showing the change in crude oil volumes at currently untracked storage locations around the world, including China.

The data platform, Ursa Maps, will one day be used to “Create a living map of the earth that shows data in a live form.” According to Mitchell, “You’d be able to click on a region or an area and determine how much oil is in that whole area, how many cars are in that area, how many boats are in that area.” It is quite an undertaking, but with the progress the company has already made it seems quite possible.

In addition to the applications already active, there are a number of services in development, including, but not limited to- the ability to track the change of valuable commodity stockpiles, assist first responders during disasters by identifying priorities for rescue crews, measuring snowpack to forecast demand for water or energy in an area, and the ability to monitor oil spills and other marine pollution.

Another application in development would track offshore weather conditions, which could preemptively alert offshore oil rigs to prepare for an incoming storm. Offshore rigs are usually ill-informed about potential weather conditions because most major weather monitors do not focus on regions with such few individuals.

Ursa’s vision of building an interactive, live world-map could change the way companies and markets respond to information specific to a particular region of the world. The potential fields in which this technology could improve efficiency seems to be limitless.