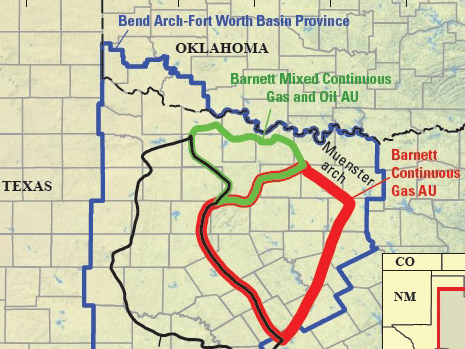 In an update of its 2003 assessment, USGS said the Barnett Shale within the Bend Arch-Fort Worth Basin Province of north-central Texas has mean volumes of 53 trillion cubic feet of shale gas, 172 million barrels of shale oil and 176 million barrels of natural gas liquids.

“We decided to reassess the Barnett Shale following the successful introduction of horizontal drilling and hydraulic fracturing, setting the stage for the current shale gas boom,” USGS scientist Kristen Marra, who led the assessment, said in a Dec. 17 statement. “In addition, the newly revised assessment incorporates estimates for both gas and oil resources within the Barnett.”

Since 2003, more than 16,000 horizontal wells and 4,700 vertical wells have been drilled into the Barnett Shale, and more than 15 trillion cubic feet of gas and 59 million barrels of oil have been produced from the Barnett Shale. According to USGS, the substantial increase in potential resources is largely due to the oil and gas industry’s switch to primarily horizontal drilling within the Barnett, paired with hydraulic fracturing. The 2003 assessment relied solely on vertical drilling, USGS said.

In a 2011 assessment, USGS estimated that the Eagle Ford Shale shale gas region covering Texas and Louisiana onshore lands and state waters has an undiscovered, technically recoverable resource of about 50 trillion cubic feet of natural gas, and about 2 billion barrels of natural gas liquids.