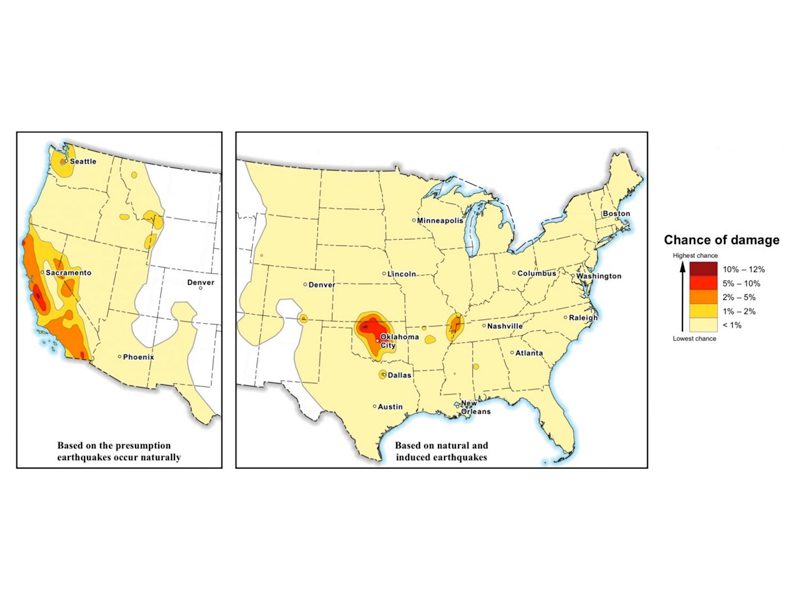 The U.S. Geological Survey (USGS) on Monday released a report on seismic activity to update the agency’s 50-year seismicity projections. This forecast is updated every six years and is used by public and private entities to establish building codes and insurance rates in affected areas. For the first time, USGS researchers forecasted the risk of man-made earthquakes, and according to researchers, some seven million people located in the highly populated areas in and around the Dallas-Fort Worth metroplex and Oklahoma City are at risk to experience a human-induced tremor.

The report noted that there were more than 1,000 earthquakes last year that measured a 3 or higher, which is a substantial increase. Historical data show that on average there are only 24 quakes per year. Oklahoma ranked highest on the list of states at risk for man-made tremors. The Sooner state was followed by Kansas, Texas, Colorado, New Mexico, and Arkansas. The area with the highest risk at 12 percent lies on the border between Oklahoma and Kansas. Other parts of Oklahoma have from a 2 to 10 percent chance of experiencing a small earthquake resulting in minimal to no damage.

Many have linked the rise in seismicity to the increase in oil and gas production in the central and eastern parts of the U.S. Since the 1960s, scientists have been aware that earthquakes can occur when water is injected into an existing fault. The advent of hydraulic fracturing turned the industry upside down and increased the volume of wastewater being injected into disposal wells. Both Kansas and Arkansas put into place new rules regulating the disposal of wastewater. Each saw a decline in seismic activity according to the USGS; however, Oklahoma has not seen a reduction in quakes.

“New regulations, new restrictions on injection have changed the earthquakes,” Justin Rubinstein, deputy chief of the USGS’s Induced Seismicity Project, said. “But for Oklahoma specifically, we’re waiting for more data to come in.”

“Recent declines in produced wastewater disposal in Oklahoma are not reflected in the USGS map,” Fallin said. “This gives us an even stronger base in going forward and gives state regulators further justification for what they are doing.”

“In the last three months, the Commission has sought actions to reduce overall disposal of produced water into the area of seismic interest by up to 40 percent below the 2014 totals,” he said. “The good news is that we are already seeing a very positive response to those actions in the form of reduced seismic activity in the central and north central areas of Oklahoma.”

Federal and state regulations may only require annual reports outlining disposal rates, so predicting induced seismic activity can be difficult. Recent research from the USGS suggests that disposal wells with lower injection rates are less frequently related to earthquakes.