GasBuddy announced its latest survey findings on American motorists’ fuel-purchasing habits, revealing that drivers are prone to overpaying by at least 20 cents per gallon at the pump1 due to factors such as laziness and procrastination. GasBuddy conducted the study to glean insights on how consumers decide where and when to stop for fuel, and explain how these decisions could be costing drivers.

These are the five things drivers are doing that are costing them at the pump:

1. Being Creatures of Habit

Nearly 80 percent of respondents have a gas station they regularly go to. When choosing a regular station, almost 38 percent of drivers say it’s because the station’s location is convenient.

“Drivers are getting lazier, and going to the same station because it’s convenient can cost you,” said Patrick DeHaan, head of petroleum analysis at GasBuddy. “The station two blocks away could be 20-40 cents per gallon lower in price, and while that’s only a few dollars’ difference per fill-up, it amounts to the hundreds of dollars per year you could be saving if you shop around.”

Only 19 percent of people decide to fill up when they see a station with a good price, with most (37 percent) waiting until they only have a quarter tank left of gas, while 28 percent wait until the gas light comes on. Even worse: over one-third (35 percent) of those surveyed have run out of gas.

“If you’re waiting until the last second to get gas, there’s a big chance you’re going to panic and pull into the first station you see without checking a price and risk filling up at an expensive station,” said DeHaan. “Our research shows that having enough fuel in your tank to shop around for the lowest price, especially in major metro areas like Los Angeles, Chicago and Washington D.C. could save you upwards of over
$60 per month.”

Consumers are paying for convenience by not planning ahead; 50 percent of respondents choose a gas station based on location, while 16 percent choose a station depending on ease of entrance. 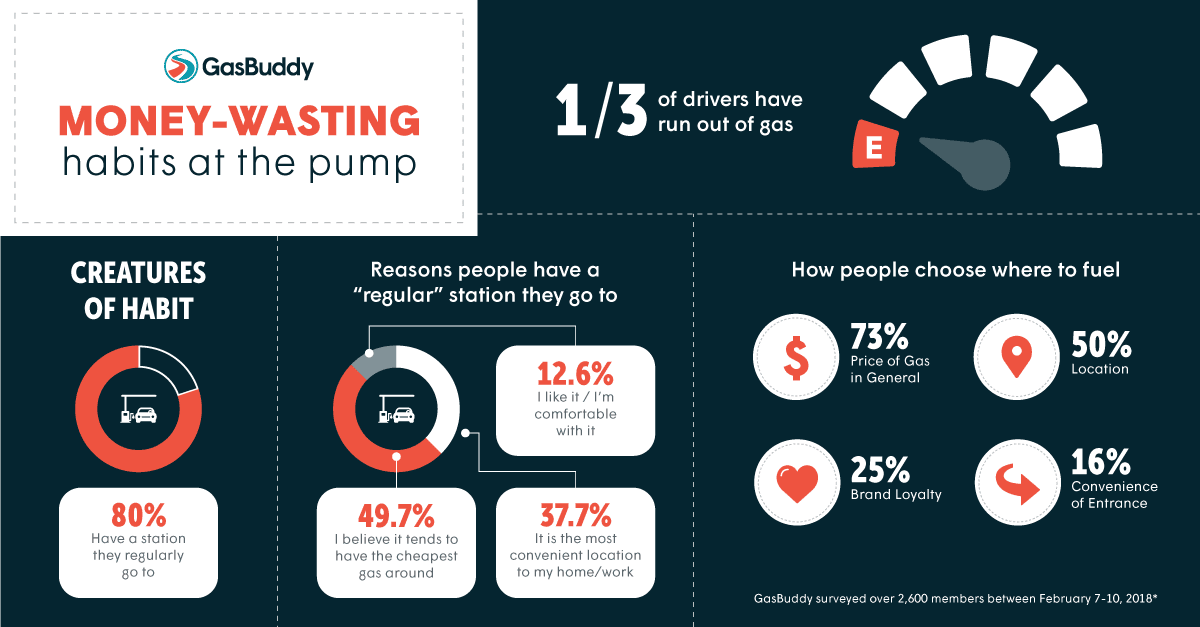 4. Paying with Plastic or Cash

When it comes to drivers’ payment preferences, 69 percent of people use a credit or debit card to purchase gasoline instead opting for cash.

“This is an interesting trend, because while stations do offer a cash discount, credit and debit cards now offer discounts on gasoline as well.” said DeHaan. “Paying with cash can be even less convenient when cards like Pay with GasBuddy can offer the same competitive discount that cash offers. Bottom line: While cash is still a way to save, do your research to find out if you qualify for additional savings at the
pump with a card instead of carrying cash.”

Gas prices have been inching up these past few months and in turn, consumers are filling up with regular instead of more expensive grades like mid-grade or premium fuel. Even so, 8 percent of consumers still fill-up with premium and 5 percent with mid-grade.

“Two years ago, the average price for regular gasoline was $1.81 per gallon, almost 75 cents cheaper than today’s average, so it’s understandable that consumers today feel the pinch at the pump.” says DeHaan. “For those who are still filling up with premium, It’s important to note that you only have to use premium if your car manual says it’s required, not if it’s just recommended.”