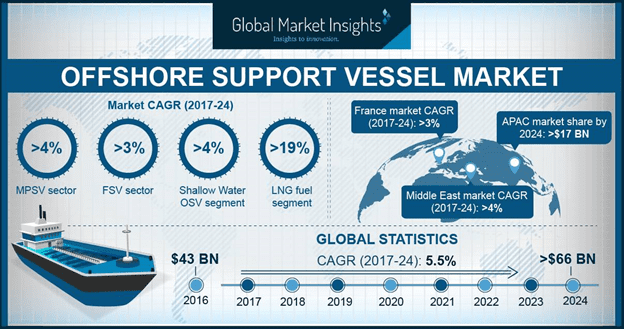 Offshore Support Vessel Market is estimated to grow at CAGR above 5.5 percent over the forecast time frame 2017 to 2024 and reach the market value around $66 billion by 2024.

Offshore Support Vessel Market is predicted to surpass USD 60 billion by 2024. Shifting trends toward E&P across subsea along with ongoing expansion plans of deep-water projects will positively impact the offshore support vessel market share. Growing measures to explore the untapped hydrocarbon reserves will further complement the business growth. According to the EIA, Gulf of Mexico accounted for about 4.5 percent of total U.S. dry natural gas production and 16 percent of crude production.

Growing demand for floating drillships and production units will embellish the platform supply vessel market share. Increasing installation of FLNG and FPSO platforms subjected to its large storage and production capacity will further stimulate the industry landscape. In 2016, Petronas’ first FLNG unit began operation with 1.2 mtpa of processing capacity at the Kanowit deep-water reservoir in Malaysia.

Norway offshore support vessel market is anticipated to exceed 400 OSV fleet on account of new oilfield discoveries along with strong order book of the country’s shipyards to cater to the oil & gas industry. As per the U.S. EIA, 7 percent of the world offshore oil production was produced from Norwegian fields in 2016.

Shifting trends toward ecofriendly hydrocarbons on account of growing environmental concerns will fuel the offshore support vessel market. Adoption of LNG by major fleet owners as a fuel subjected to the government norms toward reduction of marine emissions will foster the product penetration. In 2015, International Maritime Organization (IMO) implemented legislation to reduce NOx content in fuel to 0.5 percent for the fleets in emission control areas.