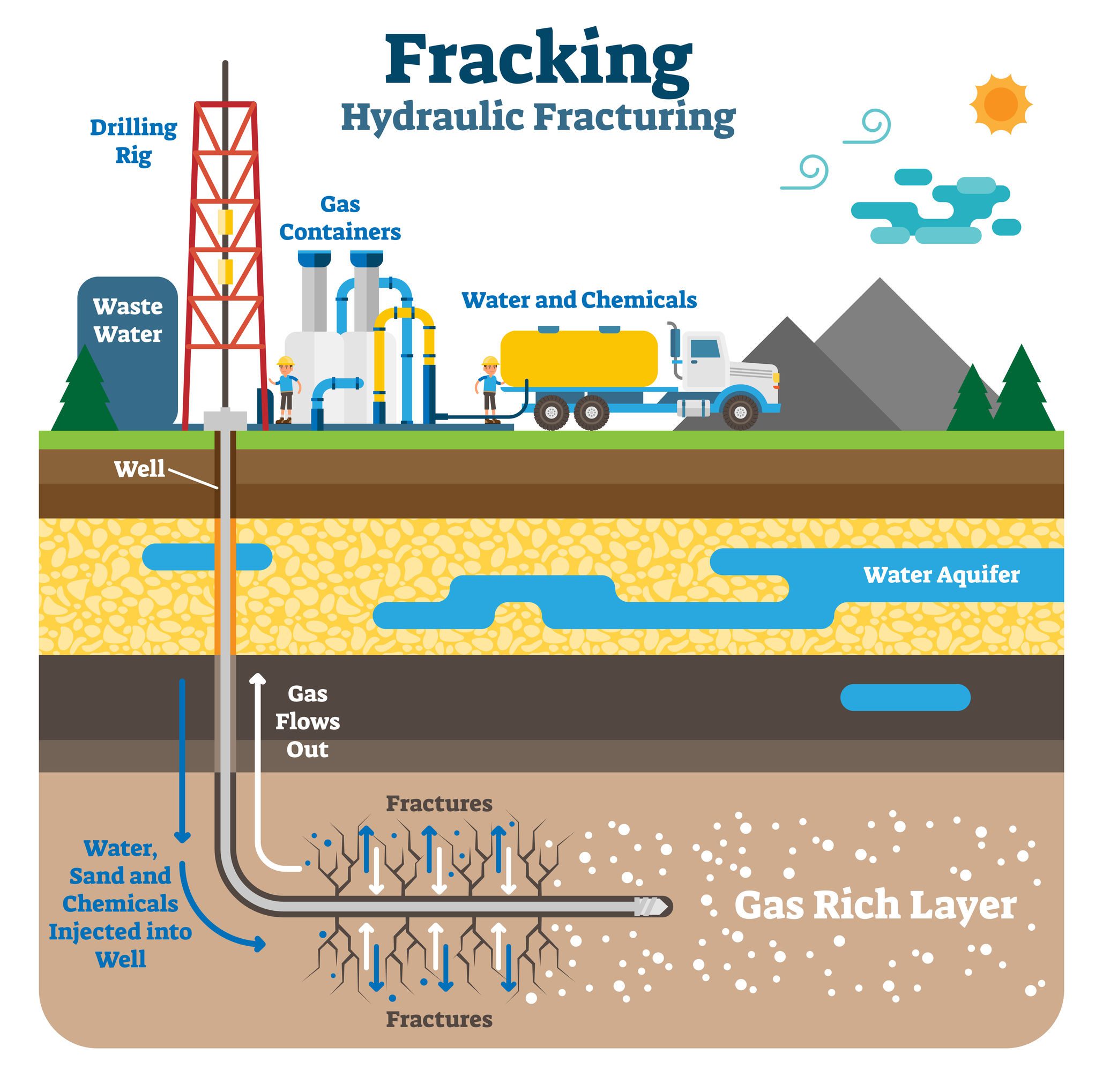 Hydraulic fracturing, which is also known as fracking, is one of the many methods used for oil extraction. It has been seen in the past decade that the combination of horizontal drilling and hydraulic fracturing has brought about large-scale natural gas drilling for new regions and opened up new ranges of shale deposits all over the country.

The process of fracking involves drilling a well and inserting a steel pipe into the wellbore. The casing of the steel pipe is targeted into the zones that consist of gas and oil. The fluid for fracturing is injected into the well, and this is when the targeted area will not be able to absorb as much fluid as it is being injected. When this becomes the case, then the targeted formation begins to fracture or crack.

Once the formation has been cracked, the injection process is ceased and the fracking liquids begin coming back to the surface. The proppants that can be found in this liquid, however, remain inside the formation in order to hold the fractures open. This is why the fracking process is quite far from being benign.
That being said, this article will look into some factors that hydraulic fracturing processes should steer clear from. Let’s move on to an overview of the ten processes that should be avoided in this well stimulation technique.

The U.S. Environmental Protection Agency estimated in 2010 that around 70 to 140 billion gallons of water were being used in order to fracture almost 35,000 wells annually. These estimated figures amount to about the annual water consumption of 40 to 80 cities that had a population of 50,000 people.

This raised the concern of too much water being extracted in order to implement fracking. Other than this, the amount of water used had to be transported with the help of 1400 trips of trucks, which impacted the local air quality, road safety, and repair expenses.

Conventional gas and oil wells, on average, use about 300,000 pounds of proppants. Due to this, frac sand mines can be seen springing up all across the country – from Texas to Wisconsin. These mines are bringing along their own impacts like dangerous air emissions alongside some potential health hazards that are mostly related to Crystalline Silica.

In addition to all the large volumes of water, hydraulic fracturing also requires a large variety of chemicals in the process. Various trade groups and oil & gas companies are quick to point out that these chemicals typically make up between 0.5 and2 percent of fracturing fluids. The reality, however, is that when these operations are utilizing millions of gallons of water – the amounts in chemicals per fracking operations tend to be quite large. That being said, these chemicals are very toxic for both wildlife and humans as they are known to cause cancer. With just a small quantity of these chemicals, millions of gallons of water can be contaminated easily!

It is necessary to mention that humans can not only ingest the fracking chemicals because of contaminated drinking sources, but they can also have these chemicals enter their bloodstream via contact with the skin. Even breathing vapors from the flowback that is stored in tanks or pits can be seriously injurious to health. As a result, spill responders, workers, and the local population get significantly affected.

Hydraulic fracturing is oftentimes used in the production areas of coalbed methane (CBM). Some of these coalbeds consist of groundwater that is so rich that it qualifies as pure drinking water.

It was found in a study conducted in 2004 that 10 out of the 11 CBM units in the US were located as part of underground sources of drinking water. Once hydraulic fracturing chemicals were injected into these sources, they had naturally gotten contaminated.
This is where the EPA had found water-based delivery systems to be more preferable.

In many of the regions where oil and gas is produced, there has been large-scale degradation of the surrounding air quality. In the example of Texas, the localities near Shale Gas wells were found to have high levels of Benzene in the air. What’s more? It was also found that more than 40 percent of the chemicals that are used in fracturing have the ability to create volatile emissions.

If these organizations switch to water-based fracking, then these dangerous emissions can be completely avoided.

It is normal to imply that as the industry is seen to expand its operations, the amount of waste generation will also be seen to rapidly increase. In the short span between 2010 and 2011, Pennsylvania alone had seen a 70 percent increase in its waste generation. These high concentrations of chemical flowbacks from fracking operations are proving to be a major threat to waste management.

A more preferable method of storing waste is to make them flow back to steel tanks.

One particularly frustrating issue for locals near fracking wells is that they have no clue what chemicals are being used by the operations. It was seen a while back that ranching and environmental organizations tried to gain information about the chemicals being used by the companies, but these organizations widely unsuccessful. It was in 2014 that these people could get information about any forms of non-regulatory approaches for extracting oil and gas.

From the perspective of public health, hydraulic fracturing companies can go about their operations without the use of toxic additives. These non-toxic additives included water-based operations, which completely replace diesel as a vital part of the process. As a result, carcinogenic benzene transmission can be completely avoided.

On that note, we would like to conclude our list of what needs to be done and what needs to be avoided to steer hydraulic fracturing operations towards a sustainable and environmental-friendly process. By being mindful of these issues, oil and gas companies can make sure that fracking operations are more benign than ever before.