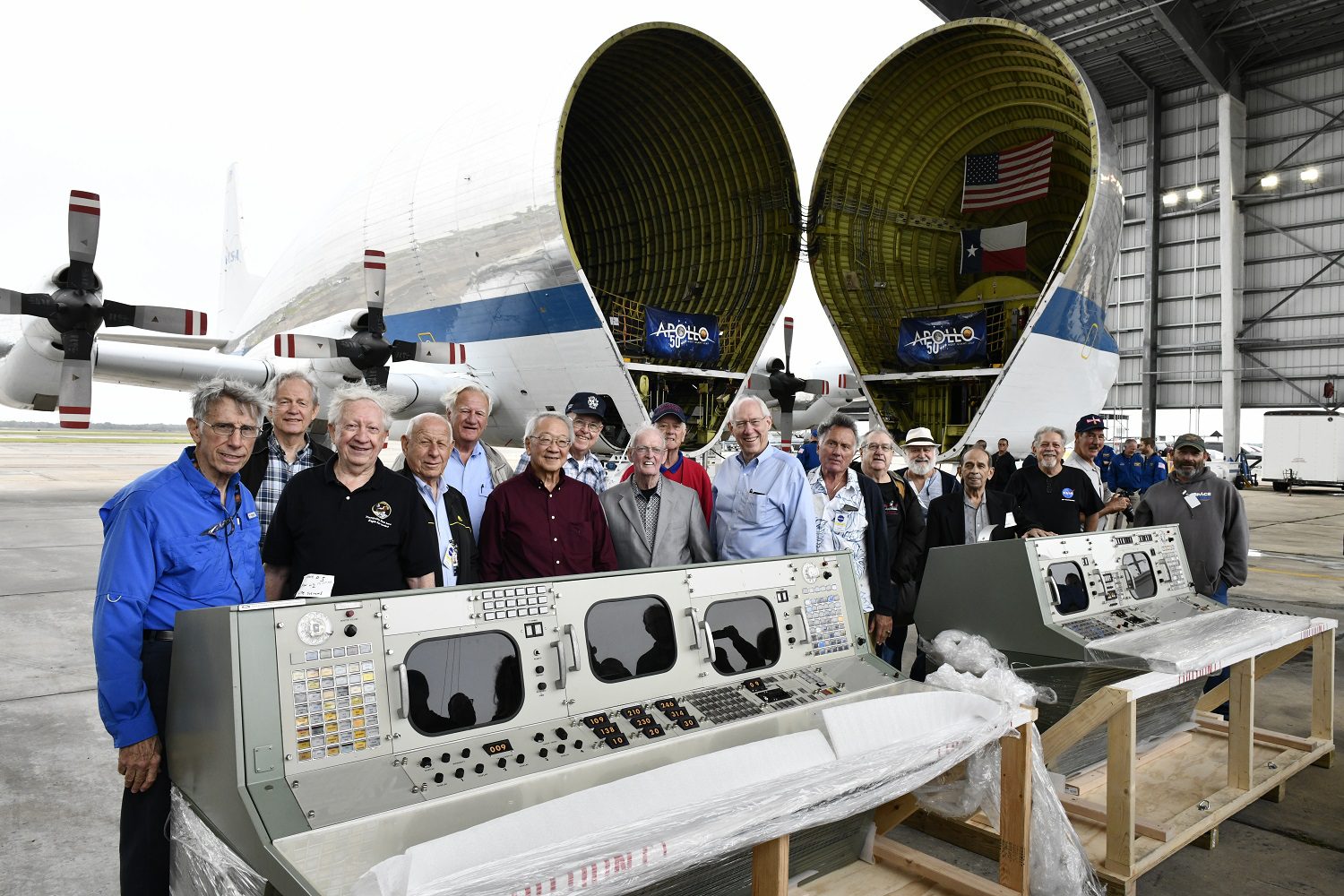 HOUSTON – It was an historic sight – living legends who worked on the Apollo program reunited for a major milestone to the see the unveiling of restored Historic Mission Control consoles used to send humans to the Moon. The newly restored units arrived in a return flight to Ellington Airport by way of NASA’s Super Guppy.

NASA Johnson Space Center and Space Center Houston are leading the restoration of Historic Mission Control and yesterday marked a major milestone in the ongoing campaign to restore a National Historic Landmark before the Apollo 11 mission’s 50th anniversary.

The history behind NASA’s historic Mission Operations Control Room spans more than 50 years and time took a toll on the room. The historic Mission Operations Control Room, used during the Gemini, Apollo and Space Shuttle eras, was in acute need of restoration. The project is restoring flight control consoles and reactivating mission situational awareness displays to recreate Apollo-era use of the wall-size screens. Furnishings such as carpeting, tile, paperwork, coffee cups and ashtrays in the room are being collected and restored to recreate the appearance of an active Mission Control room during the Apollo era. When completed, the room will accurately portray how the area looked the moment the first Moon landing occurred on July 20, 1969.

Designated a National Historic Landmark in 1985, the control room celebrates human space exploration and inspires people from around the world who visit. Johnson Space Center, Space Center Houston, and the city of Webster are working together to restore the room that made what seemed an inconceivable dream become a reality.

The restored Historic Mission Control Room will be unveiled to the world in time for the Apollo 11 mission’s 50th anniversary and the city of Houston will host a month-long celebration, including a ribbon-cutting for the restored Mission Control room.

The city of Webster, a longtime supporter of Space Center Houston, gave a $3.5 million lead gift toward the $5 million “On a Mission” campaign. Space Center Houston then led a 30-day funding campaign drawing more than 4,000 pledges from 15 countries including the United States, Canada, the United Kingdom and Germany. The city of Webster matched the crowdfunding campaign gifts dollar-for-dollar up to $400,000 as a component of the lead gift. Current proceeds stand at approximately $4.5 million leaving $500,000 remaining to meet the $5 million On a Mission campaign goal.

The Manned Space Flight Education Foundation is a 501(c)(3) nonprofit science and space exploration learning center with extensive educational programs. Space Center Houston is the cornerstone of its mission to inspire all generations through the wonders of space exploration. The center draws 1 million visitors annually, was named “Best Museum in Texas” by USA Today and generates a $73 million annual economic impact in the greater Houston area. Space Center Houston is a Smithsonian Affiliate, the Official Visitor Center of NASA Johnson Space Center and a Certified Autism Center. More than 250,000 teachers and students from around the world visit the center annually to experience our educational space museum with more than 400 things to see and do. For more information, go to www.spacecenter.org.