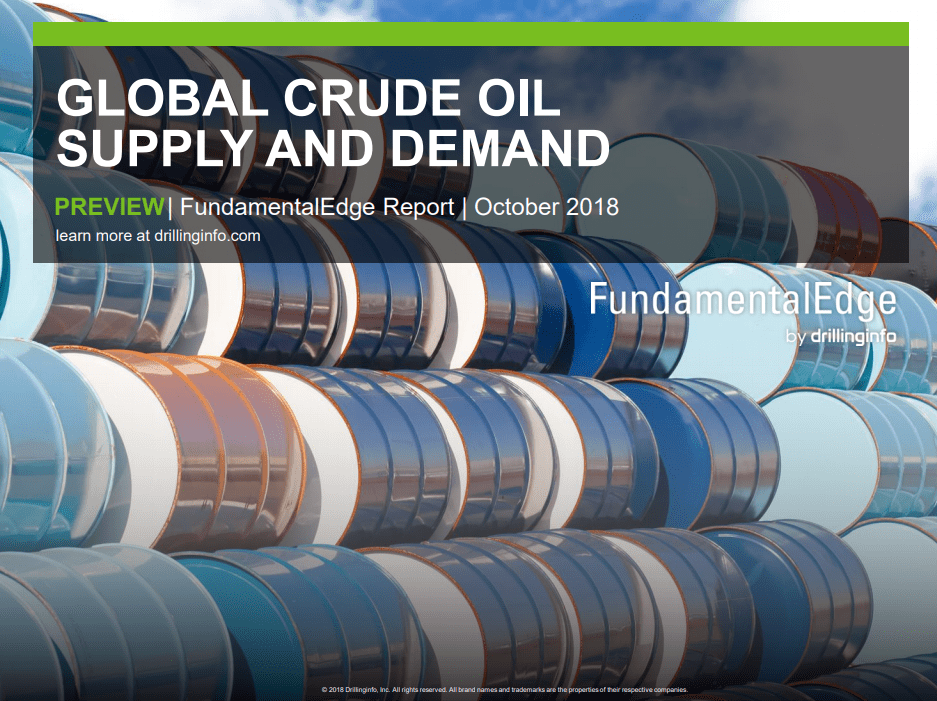 Austin, TX – Drillinginfo, the leading energy SaaS and data analytics company, has released its latest FundamentalEdge series report, Global Crude Oil Supply and Demand, which focuses on world supply and demand factors that have forced crude oil to reach its peak price for the foreseeable future.

According to the report, prices reached their four-year highs in early October 2018 after concerns about Iranian sanctions and declining Venezuelan production created concerns about a possible supply shortage. Both global benchmark prices have fallen about $10/Bbl after reaching these four-year highs.

Saudi Arabia & Russia have ramped up production to offset the declines and vowed to meet any additional demand. Along with continued US production growth and increases from Libya and Nigeria, we have once more entered an oversupplied market. At the same time, China, under attack from US tariffs, will likely turn to Iran to supplement its crude oil import needs. This will also mean that the considerable US crude oil volumes exported to China today will likely have to find a new home. In addition to China, India, Turkey and some EU countries may continue importing crude from Iran.

“Efficiency gains have brought about a very low breakeven cost for shale production and US production has emerged as among the most economic in the world,” said Bernadette Johnson, Vice President of Market Intelligence.  “Although the Permian is grabbing headlines with its top-tier economics and stacked pay, in today’s price environment, there is economic acreage available in all major shale basins in the country. While identifying your peak isn’t always good news, the US still has many profitable plays,” said Johnson.

US shale production will continue to increase. Most US basins have acreage that remains economical at sub $40-$50/Bbl. The Permian Basin should also see a rapid production increase when pipeline takeaway constraints are resolved in late 2019.

Petrol is AUD $1.66 / litre in the central Qld , Australia mining town, where I live. People are buying the 2.2 litre Diesel Ford Ranger.