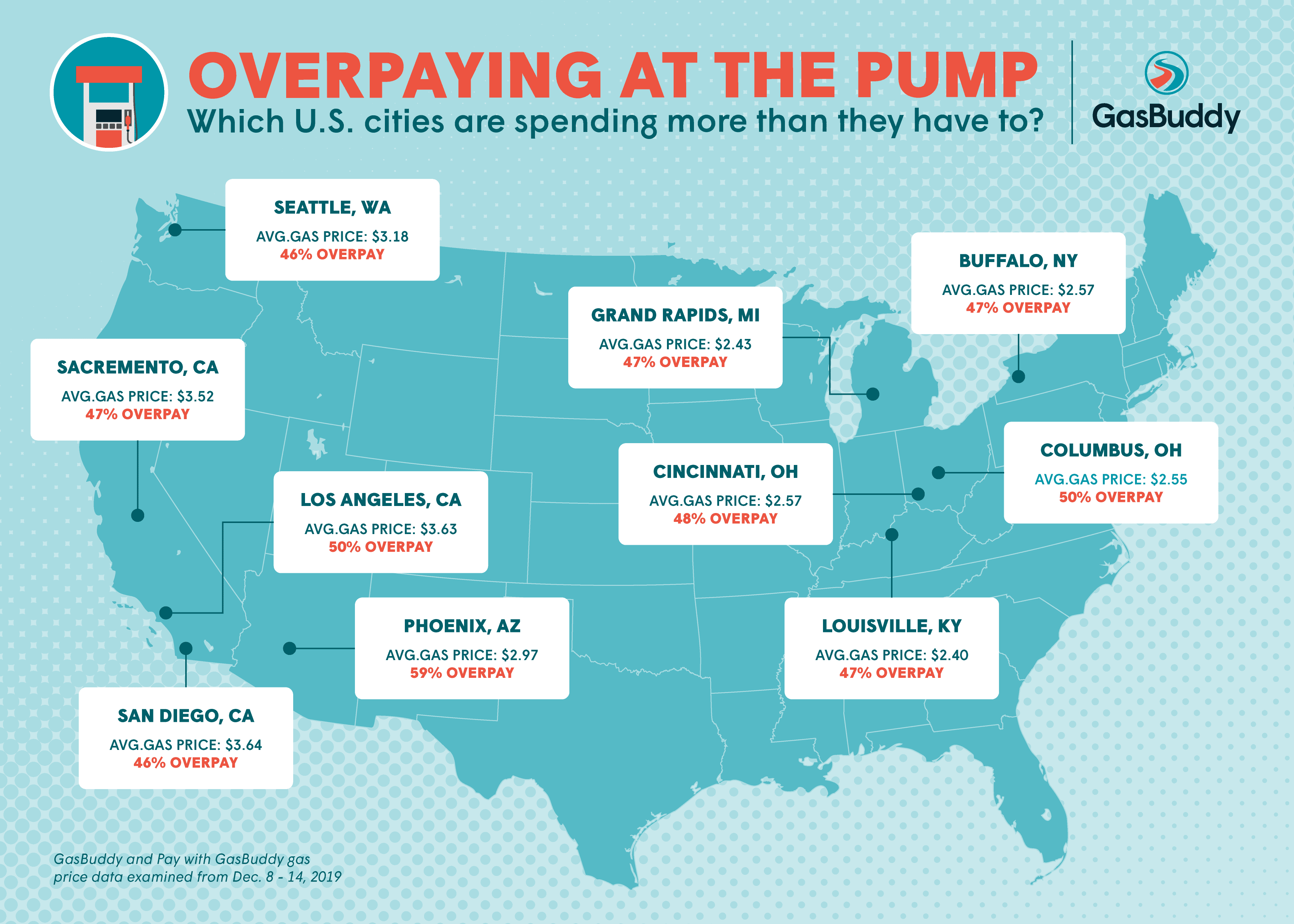 BOSTON — While American households are expected to spend nearly $2,000 on fuel in 2020, families can fork out an additional $200 more on gas per year if they aren’t careful, according to a new study released today by GasBuddy, the smartphone app helping consumers avoid paying full price for fuel. The study finds that 37% of Americans are already overpaying for gasoline, with more than 50% of drivers in Phoenix, Columbus, Ohio and Los Angeles most frequently wasting money at the gas pumps.

GasBuddy examined gas price data from the GasBuddy app and compared it with thousands of Pay with GasBuddy fuel transactions in the top 50 metropolitan areas by population as defined by the United States Census Bureau from Dec. 8 – 14, 2019, noting how many drivers in each city paid more for their gasoline than the average gas price and the amount by which they overpaid for their fill-up.

TOP 10 CITIES WITH THE MOST DRIVERS OVERPAYING FOR GASOLINE

“No matter where you live, there’s a sizable chance you can overpay for gas. All of the cities we examined saw at least 20% of drivers overpaying at the pump,” says Patrick DeHaan, head of petroleum analysis at GasBuddy. “We found that the highest discrepancies in the average gas price versus what drivers actually paid occur in sprawling cities where major highways intersect, creating a difference of more than $4 per fill-up. That’s just shy of $200 per year!”

Those sprawling cities with high driving populations include Indianapolis, In., New Orleans, Detroit, St. Louis, Mo. and Columbus, Ohio, with drivers paying more than 30c/gal over the average posted price in each city.

The study also found that the day of the week when drivers are most likely to overpay for gasoline is Tuesday, followed by Sunday, Thursday, and Saturday.

“Tuesday is the day before the weekly gasoline and oil report by the Energy Information Administration, when prices are most likely to be in flux,” says DeHaan. “We also noticed many drivers travel on major highways, where prices tend to be most expensive, to and from weekend getaways.”

How do Americans pay the lowest price at the pump? “Always shop around for the best price,” says DeHaan. “Using tools like the GasBuddy app to find the lowest gas price can save drivers hundreds per year on their gas bill. And according to our previous study, only 46% of Americans are part of a fuel loyalty program like Pay with GasBuddy, which can provide additional savings benefits at the pump.”

GasBuddy examined gas price data from the GasBuddy app and compared it with thousands of Pay with GasBuddy fuel transactions in the top 50 metropolitan areas by population as defined by the United States Census Bureau from Dec. 8 – 14, 2019, noting the number of drivers in each city that paid more for gas than the average gas price and the amount by which they overpaid for their fill-up.

Sun Coast Resources, Inc. Named as One of Houston’s Best And Brightest Companies To Work For