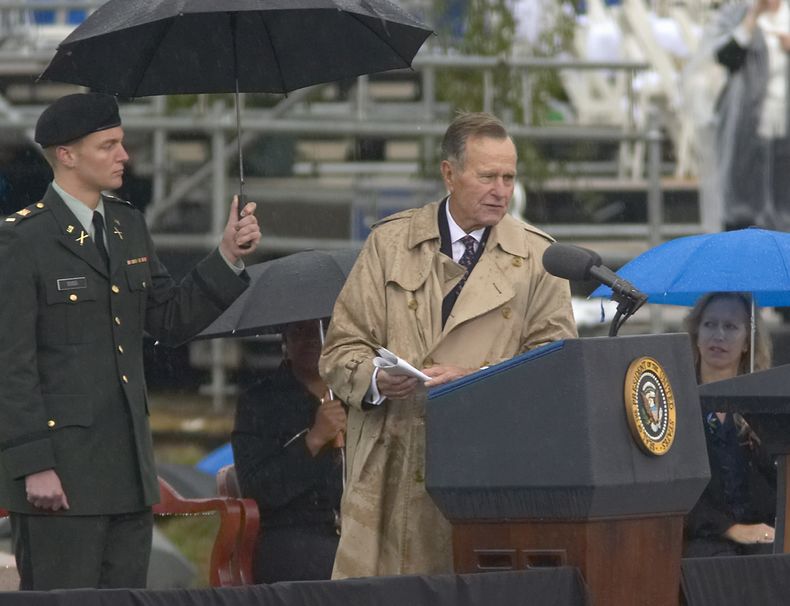 Fate, in some respects, was not kind to George H. W. Bush, who died last week in Houston.

Of course, fate did shine on the 41st President of the United States when, as a Navy fighter pilot in World War II, he was shot down and later rescued from the waters of the Pacific Ocean.

Fate was also shining on him as the son of a successful U.S. Senator, Prescott Bush of Connecticut.

After graduating from Yale in 1948, he and his bride, Barbara, left the somewhat safe confines of the East Coast for the wide-open spaces of West Texas to become an oilman.

He started at the bottom learning the industry’s service sector and later as a landman and independent producer in Odessa. As success followed success, Bush decided to move to Houston and began drilling offshore wells under his company name of Zapata Petroleum Corporation.

He ran for the Senate, and lost; he ran for Congress, and won. He later served in such distinguished leadership roles as ambassador to the United Nations, ambassador to China, head of the Central Intelligence Agency.

As all of these events were unfolding, the oil business turned from boom to bust. Prices rose in 1982 to a high of $40 per barrel under two embargoes by some OPEC members in the Persian Gulf. Consumers became angry. Congress ordered the leaders of the integrated oil companies to come before them to explain their “obscene profits.”

By 1980, when Bush was elected to serve as Vice President under President Ronald Reagan, a firestorm had become a raging forest fire engulfing the entire nation.

Fate had once again placed George H. W. Bush, a man who loved wildcatting and this great industry, in the middle of a political onslaught.

By 1986, the world had a surplus of oil, and prices fell to $10. There was little, if anything, Vice President Bush could do about the volatility in price. The members of OPEC were in the driver’s seat, but they were not willing to reduce production, which meant that the oversupply would continue for quite some time. And it did until 2000.

Bush became President in 1988 during the height of the depression in the oil industry. Hundreds of oil companies had closed their doors, and thousands of employees were unemployed. What could the federal government do under President Bush to ease the pain in the oil patch which was centered in his adopted home state of Texas?

The debate included the pros and cons of the effects on the economy and national security. Many in the oil industry wanted an oil-import fee established while others pointed to the negative impact to the economy. Bush decided against supporting the oil import fee.

“Our comprehensive and balanced strategy (promises) an energy future that is secure, efficient, and environmentally sound,” Bush remarked in 1991. “This strategy relies on the magic of the marketplace, the resourcefulness of the American people, and the responsible leadership of industry.”

In other words, don’t expect the federal government to provide a financial bailout.

Bush was torn between his loyalty to his friends in the oil business and his loyalty to what he believed was the long-term economic benefit to the nation as a whole.

In the end, however, it was the economic downturn that turned voters away as they elected Bill Clinton president. Bush had promised many times not to increase taxes, but was encouraged to do so in supporting a Republican-Democratic joint effort to pass legislation to boost the economy. Clinton was able to use the “Read My Lips” slogan against Bush, who had an exceptionally high approval rating among voters in 1991, and capitalized on his tagline, “It’s the economy, stupid.”

He had many other tough choices on energy and foreign relations, including an armed conflict to remove Iraqi troops from Kuwait, drilling in the Arctic National Wildlife Refuge, the decline of the former Soviet Union, and beginning of the climate change debate.

I lived in Washington from 1986 to 1994 working for the Independent Petroleum Association of America, and I was involved daily in the debate on energy policy issues. We did not always agree with the policies implemented by his administration, but we always had respect for him. He was a great man, a great Texan, and a great American, and we were very fortunate to have him.

Fate can be a fickled friend sometimes, but George H. W. Bush wanted the challenges and he was not afraid to engage them head on.