The global oil and gas industry has witnessed a significant slowdown in the number of oil and gas contracts and contract value, which is largely attributed to the decline in crude oil prices and reduced demand amid the COVID-19 outbreak. Furthermore, many oil and gas companies are reducing CAPEX/OPEX exposure in this non-conducive market. These negative impacts are dragging the oil and gas equipment and services market further down, says GlobalData, a leading data and analytics company.

Some of the key contracts awarded/secured in this time were Enppi, TechnipFMC and Petrojet’s US$2.5bn contract for the engineering, procurement and construction (EPC) of mazut hydrocracking complex with 2.8mtpa capacity in Assiut, Egypt; and MAPNA Group’s ten-year Iranian Petroleum Contract framework agreement worth US$1.38bn for the provision of development and operations, including upgrading and construction works on facilities to increase production and exploitation of the Parsi and Paranj fields in Iran.

GlobalData’s latest report, ‘Q1 2020 Global Oil & Gas Industry Contracts Review’, states that the upstream sector reported 735 contracts in Q1 2020, followed by the midstream and downstream/petrochemical sectors with 155 and 118 contracts, respectively. North America recorded the majority of the contracts in the quarter, with 347, followed by Europe with 328. 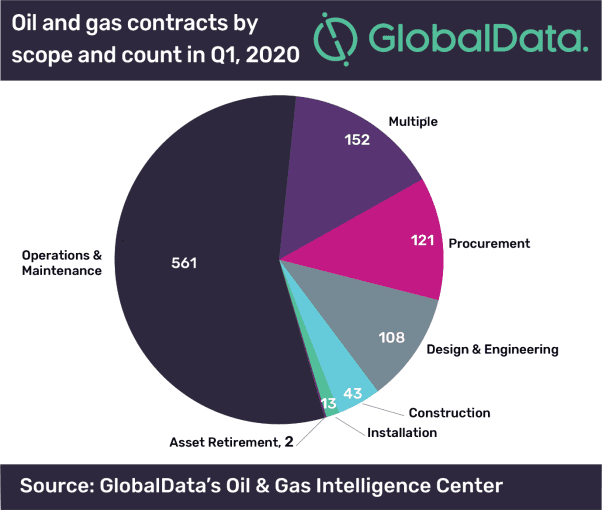 Operation and maintenance (O&M) contracts represented 56% of the total made in Q1 2020, which was followed by contracts with multiple scopes such as construction, design and engineering, installation, O&M and procurement, which accounted for 15%.