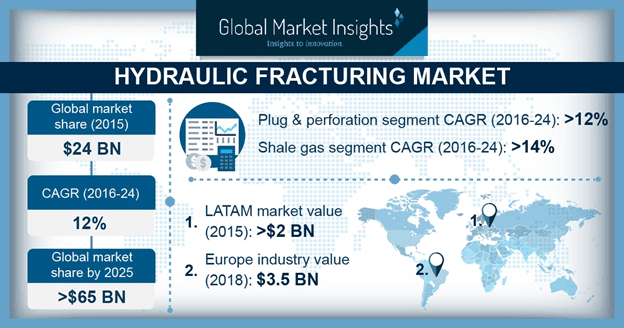 Increasing petroleum consumption and rapid infrastructure development will drive the hydraulic fracturing market. As per BP statistical review, global crude oil consumption was 93 million barrels per day which increased to 95 million barrels per day. Growing investments in the development of unconventional resources owing to the continuous decline in conventional reserves will drive product penetration.

The potential application outlook of natural gas across various industries and power plants will enhance the demand. Natural gas consumption was 3,410.2 bcm in 2014 which increased to 3,468.6 bcm in 2015. Increasing exploration and production of shale coupled with technological advancement and availability of resources will increase the hydraulic fracturing market share.

The U.S. hydraulic fracturing market will grow by over 8.5 percent by 2024. Favorable government regulations, improved drilling, skilled manpower and abundant availability of shale gas, tight gas, shale oil and tight oil will fuel the product demand. The Marcellus shale play accounts for 1,500 tcf of shale gas which is half of the shale gas present in the country.

Horizontal hydraulic fracturing market share accounted for above 65 percent in 2015 owing to its wide application in the extraction of unconventional reserves in the U.S. In 2015, over 70% of the producing wells in the country were horizontally drilled as they provide greater access to natural gas surrounding the entire portion of well.

The hydraulic fracturing market from plug and perforation technology was valued above USD 16.5 billion in 2015. Wide application in cased hole wells, easy accessibility for fracking in horizontal wells and favorable technology will drive the product demand. Lower cost and less time consuming are the factors that will propel the demand of side sleeves by 2024. This technology is widely used to shut off the flow from one or more reservoirs.

The shale gas segment is set to witness growth rate exceeding 14 percent by 2024. Better fuel efficiency and a rise in natural gas demand coupled with stringent government regulations to reduce carbon emissions will drive the demand for shale gas. Tight gas accounted for over 15 percent of the global hydraulic fracturing market share in 2015. Aging brownfields and a rise in maturing projects will propel the demand for crude oil from unconventional resources.

Russia accounted for over 40 percent of the Europe hydraulic fracturing market owing to the development of potential hydrocarbon reserves. In 2015, Russia held more than 665 tcf of unconventional reserves which includes tight gas, shale gas, CBM and hydrates,

Natural Gas Shows Signs of Becoming the Fuel of the Future