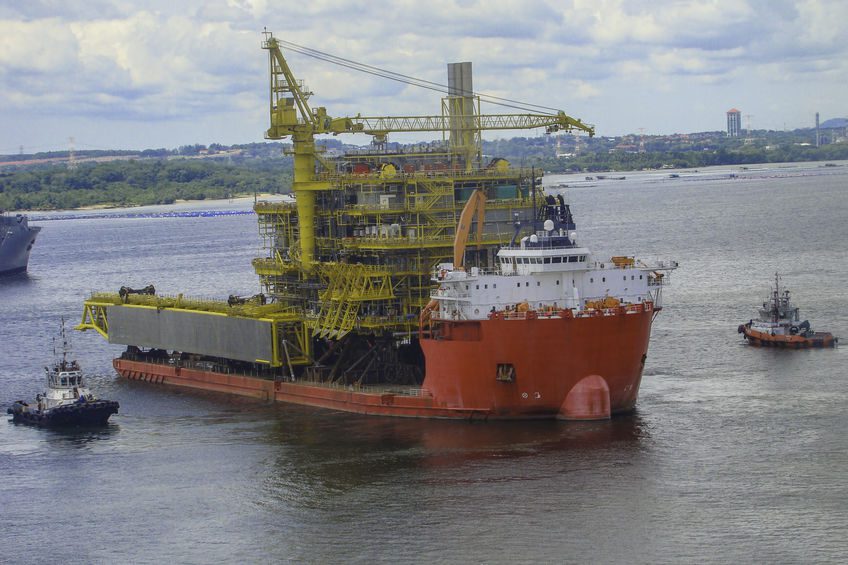 As of January 1, 2020, the International Maritime Organization (IMO) will begin enforcing a new regulation that caps the allowable sulfur content of all marine fuels from its current level of 3.5% m/m (mass/mass) to 0.5% m/m. While this new limit will not change the lower limits in existing sulfur Emission Control Areas (ECAs), it will inevitably have wide-ranging implications on oil refiners and the shipping industry, as well as force significant changes in the demands for certain bunker fuels. As a result, demand for the widely used 3.5% m/m high-sulfur fuel oil (HSFO) is expected to drop as shipowners seek alternatives to power their vessels. There has been global debate about IMO 2020 being delayed or phased in but as of now there has been no indication of any delay in the scheduled implementation. As if to underscore their position, in October 2018, the IMO adopted an additional ban on ships even carrying high-sulfur marine fuels starting in March of 2020 unless they have the required equipment on board to use them.

Globally, marine vessels account for about 4% of global oil demand and are a critical part of the global economy, moving more than 80% of global trade by volume and more than 70% by value.

Currently, there are three main ways the shipping industry can comply with the more stringent IMO sulfur specification. They include:

Residual fuel oil currently accounts for the largest component of bunker fuel. According to some estimates, the shipping industry will need to replace up to 3 million barrels per day (MMBD) of high sulfur fuel oil (HSFO) with lower sulfur IMO compliant fuel. However, the global supply of very low-sulfur fuel oil (VLSFO) is estimated to only increase to 1.4 MMBD in 2020 and to 1.7 MMBD in 2024.

Meanwhile, the share of high-sulfur residual fuel oil consumed by U.S. ocean-going marine vessels is forecast to drop in the near-term, from 58% in 2019 to 3% in 2020, according to the U.S. Energy Information Administration (EIA), because few ships currently have scrubbers installed or will have them installed by next year. As some ships install scrubbers that allow them to consume higher-sulfur fuels, EIA expects the residual fuel share to rebound partially to 24% in 2022.

Some market participants have already prepared ahead of the IMO regulation while others have lagged. In fact, Jerome Leprince-Ringuit, managing director of marine fuels at French oil giant Total, was quoted as saying the “shipping industry is not prepared” to comply with the mandate, and a recent survey of shipping participants indicated that IMO 2020 exposes widespread concerns about lack of fuel cost.

For those left behind, participants will either need to continue to consume potentially higher priced HSFO and outfit their ships with costly scrubbers or find VLSFO to comply. For the latter, some estimates say there will be insufficient supplies of VLSFO at ports worldwide when the mandate goes into effect, which could result in higher freight costs for most cargoes and potentially higher-priced cruise ship fares.

By any lens, this will hit both shippers and carriers in the pocketbook. The spot charter market price will certainly increase as ship owners pass-through higher price fuel costs with bunker adjustment clauses added to new contracts. While slow steaming may would help reduce the cost of fuel on a particular voyage it will have ripple effects to the market overall in reduced shipping availability as voyages take longer to complete.

As signs mount that initial IMO 2020 compliance levels will get off to a slow start, clarity around the supply and demand picture is still developing. One driver for this is uncertainty around how shipping authorities will handle FONARs (fuel oil non-availability reports) that indicate a vessel was not able to lift IMO compliant fuel. While FONARs are an official report, they are not a guaranteed waiver and, as such, fines can still be levied on vessels if they fail to comply with the sulfur cap rules whether or not they present a FONAR.

There is no single path for refiners to prepare for the impending IMO 2020 regulation, although some options include: 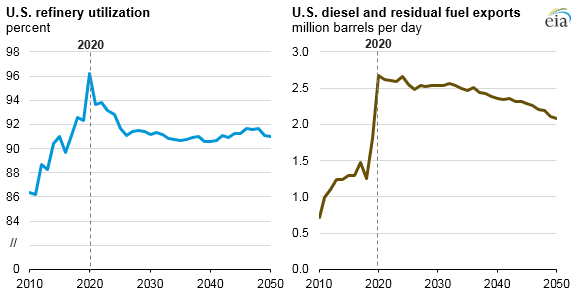 Another type of crude grade that could benefit refiners when IMO 2020 goes into effect is a heavy-sweet crude variety, which can have high yields of diesel and low sulfur fuel oil. However, sourcing this crude by refiners could be challenging 2020 onward.

On a U.S macro level, U.S. refinery utilization is expected to increase to 96% in 2020 and it will remain between 90% and 92% after 2026 through 2050 as refineries aim to convert heavy, sour crudes and residual fuel oil into lower-sulfur fuels, according to the EIA. The agency noted that this change will result in both increased imports of unfinished oil and increased exports of low-sulfur diesel and residual fuels to supply the global market.

IMO 2020 is one of the most significant regulations in the past decade impacting the energy markets. The impacts reverberate beyond just the maritime industry. The trucking and aviation industries will also feel the effects of increased demand of lower sulfur fuels. While the IMO has stood fast on the timeline for the new regulations, there is another meeting of the IMO’s Marine Environment Protection Committee in May of 2019 where additional proposals will be reviewed on phasing in the regulations. The Trump administration has publicly stated its desire for a phased implementation of the regulation, which will give any proposals more weight than in prior discussions. Regardless of the outcome of that meeting, IMO 2020 is coming, and the maritime and refining industries will feel the impacts for years to come. James Morgan is a Director in Opportune LLP’s Process and Technology practice. James is an experienced consulting executive with over 18 years of experience in project management and solution delivery for the Energy industry. He is experienced in all aspects of a project life cycle from strategy definition and business case development to production support, for both packaged and custom software implementations. Prior to Opportune, James served as the Global Refining Lead for IT at LyondellBasell. James has worked on business process improvement and software implementation projects for natural gas, power, crude, refined products, NGLs, petrochemicals, softs and ethanol. James’ scope of experience stretches across front, middle and back-office operations. James has a B.S. in Information Systems and Decision Sciences (MIS) from Louisiana State University.