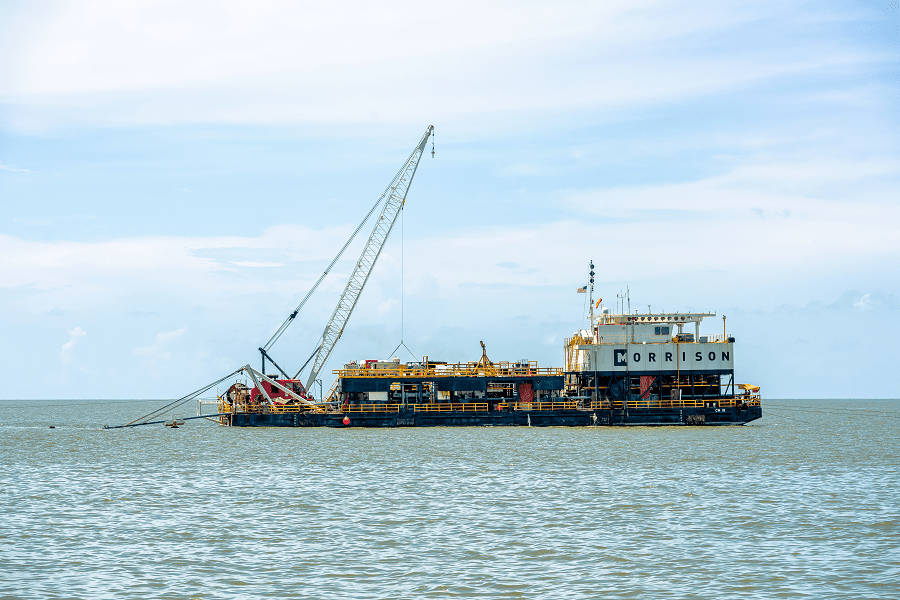 The most recent 60,720 foot pipeline installation campaign consisted of 3 inch, 4 inch, 6 inch and 8 inch pipelines in water depths of approximately 140 feet and included burials, risers and tie-in fabrication and installations, crossing mitigation, and pigging, hydro testing and commissioning of the pipelines.

The Byron pipeline installation presented a unique opportunity for the triple lay of a portion of the overall pipelay on the project. To perform the pipelay installations and bury operations, Morrison utilized its pipeline lay barge, the CM-15. Morrison worked with the export pipeline companies and installed hot tap tie-in on those transmission lines. This was performed utilizing Morrison’s dive asset, DSV Kelly Morrison, while the DSV Joanne Morrison provided both saturation and surface diving support for the riser clamp, pipeline tie-ins and various dive operations.

“We are extremely proud to reach the milestone of ‘more than 5.5 million ft of pipe laid in the Gulf of Mexico’ in 2020, the year in which Morrison celebrates its 20th anniversary of working in the pipeline business,” stated Morrison CEO Chet Morrison. “We are established pipeline veterans that can accomplish challenging projects even in difficult times, and the completion of this project is evidence of that.”

ABOUT MORRISON
Chet Morrison Contractors, LLC (Morrison) is an energy service company that delivers integrated infrastructure solutions to clients in the oil and gas and renewables industries. With more than 38 years of experience, worldwide facilities and a wide range of specialized resources, the company prides itself on providing creative alternatives and value-added solutions to every project, both onshore and offshore. The company adheres to the highest standards of quality and safety with uncompromising regard for the environment. For more information, visit: www.morrisonenergy.com.

The Impact of Virtual Reality on Oil and Gas Logistics