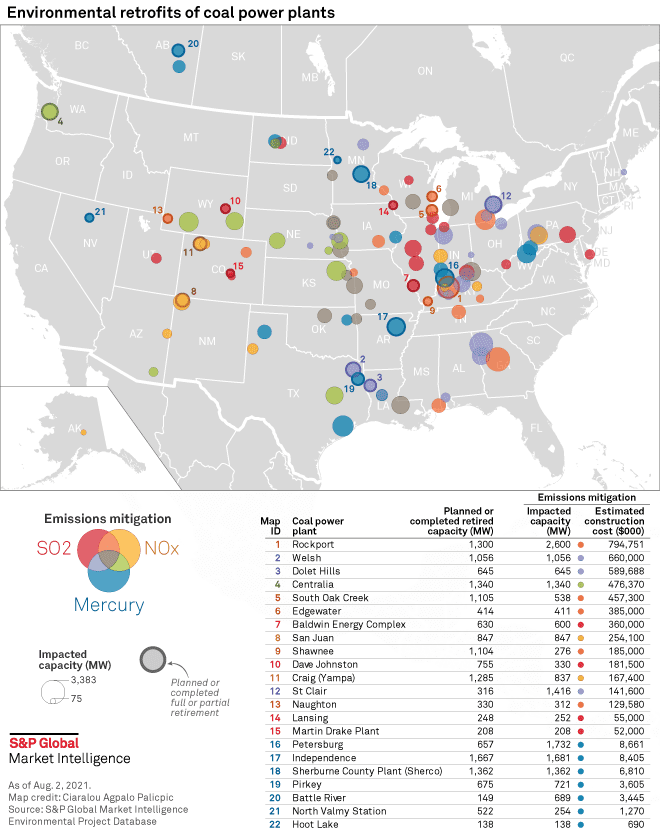 Global Market Intelligence released a new report today that estimates that $34 billion in coal plant investment and another $34 billion in new gas plant construction could be at risk.

While the past decade has seen U.S. electric sector carbon emission declines, attributable mainly to the substitution of coal generation with natural gas generation, recent pricing trends indicate further emissions reductions via this avenue are unlikely. More recently, the advancement of renewable mandates and regulatory support for retiring coal generation in parts of the country indicate that a new round carbon emissions reductions are on the horizon. However, to meet ambitious decarbonization targets such as those in the Biden administration’s Clean Energy Standard, green energy will need to expand much more rapidly.

This push could reduce the value of recent investments in pollution control equipment at coal plants. Furthermore, a review of markets with strong renewable mandates and carbon emissions pricing indicates much of the U.S. fleet of recently built natural gas generation could come under pressure as well.

Key highlights from the report:

• Recent price increases for natural gas signal the end of coal/gas switching as a means to reduce CO2 emissions
• Expanding renewable energy will cut emissions from both coal and natural gas, and is likely to lead to stranded investments in both classes of generation
• Recent pollution control investments in the coal fleet may be unrecoverable, putting an estimated $34 billion in investment at risk
• Similarly, new combined cycle gas plants built in the Midwest over the last 10 years may also become uneconomic, putting an additional $34 billion at risk
Here is the full report:

5 Factors To Consider When Buying Cranes