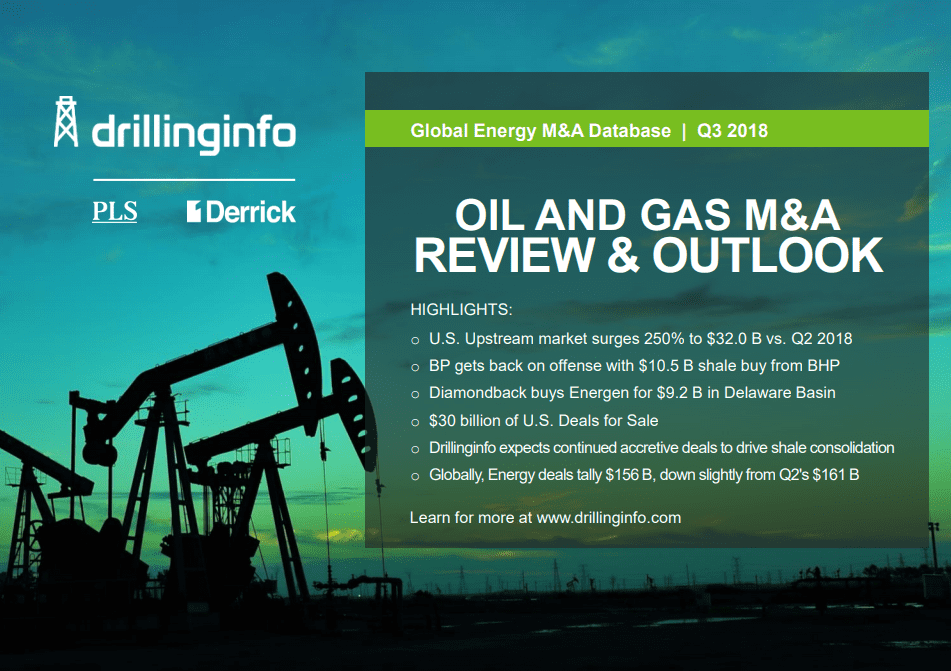 As Drillinginfo correctly predicted at the beginning of July 2018, factors that led to the dramatic increase include:

In a soon-to-be-released report, Drillinginfo findings show $32 billion in activity during 3Q 2018 which is 76% above the quarterly average of $18.3 billion dating back to 2009.  The highlight of the quarter was BP’s $10.5 billion strike to buy a portion of BHP’s U.S. onshore portfolio (Permian, Eagle Ford and Haynesville) which is the single largest asset level purchase on record and also marks BP’s return to offense with its largest upstream buy since buying ARCO for $28 billion in April 1999.  BP reportedly beat out Shell for this asset package – a dynamic that solidifies the importance of the U.S. shales as a key portfolio element for global majors.  Also during Q3, Permian-focused Diamondback Energy boldly acquired fellow-Permian producer Energen Resources for $9.2 billion – a number just shy of the Permian record $9.5 billion paid by Concho Resources for RSP Permian during Q1 2018.

“We expect U.S. M&A activity to continue at a heightened level,” said Drillinginfo Senior Director Brian Lidsky.  “The industry is regularly reporting record well results across the U.S. shales as it continues to de-risk acreage positions and advance technology,” he said.

“As Wall Street is increasingly discriminating among public companies, the food chain of the big getting bigger is alive and well – shale basin leaders are being rewarded for mastering scale, efficiency and technology.  This sets the stage for additional mergers that not only checks all the accretive boxes for the buyer, but also provides sellers upside by joining forces with these leaders,” said Lidsky.

“We view the recent Concho and Diamondback examples in the Permian as the start of a trend – not one-off style hits.  Shale basin consolidation will be a continuing theme supplemented by occasional major new entrants for those few large and global companies who have not yet established a significant shale presence. Private equity and private companies will continue to play a role in deploying carefully calculated risk dollars to fringe areas and benches within established resource plays plus advancing today’s technology to new areas like the Powder River Basin as well providing inventory as they move to divest mode,” said Lidsky.