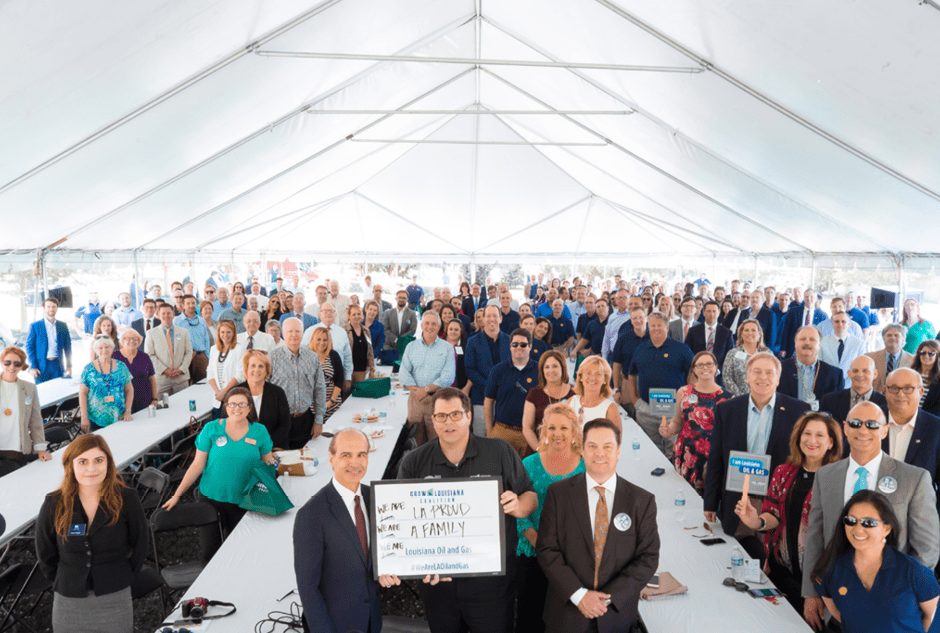 BATON ROUGE – April 25, 2018 – More than 700 Louisiana leaders, workers, supporters and students came together Tuesday, April 24, to show support for the state’s future and most important economic driver at 2018 Oil & Natural Gas Industry Day. The event featured a keynote speech by U.S. Department of Energy Under Secretary The Honorable Mark Menezes as well as remarks from Louisiana leaders who emphasized the energy sector’s significant role in Louisiana and the United States.

Under Secretary Mark Menezes spoke on the Trump Administration’s vision for the future of the industry in America and how it fits into a global context. As a Louisiana native, he acknowledged the leading role our state has in building the nation’s energy capacity and gave insight into what policies he believes will foster innovation, growth and prosperity.

“We cannot let our leaders take Louisiana’s oil and natural gas industry for granted. To be heard, we must show up. Our state needs leaders who will step up to protect our jobs and our quality of life,” said Grow Louisiana Coalition Executive Director Marc Ehrhardt.

In addition to remarks from the Under Secretary, Industry Day attendees also heard from industry professional Mike Moncla, president of Moncla Companies. Moncla discussed the challenges we face in growing the oil and natural gas industry here in Louisiana and how that has caused a drastic movement of our state’s population and businesses to states that have more appealing economic and legal landscapes.

“I was in a customer’s office in Houston last week who was probably the largest taxpayer in Louisiana. Since these lawsuits have surfaced they have spent billions of dollars in other states. While Louisiana used to represent over 60 percent of their production it is now less than 10 percent,” said Moncla.

The event, hosted by Grow Louisiana Coalition (GLAC), Louisiana Mid-Continent Oil and Gas Association (LMOGA) and the Louisiana Oil and Gas Association (LOGA), provided attendees with the opportunity to discuss issues impacting Louisiana’s industry with professionals in the field, along with state lawmakers. New this year, attendees experienced interactive activities such as a virtual reality look at offshore platforms, S.T.E.M education activations and an overview of the Oyster Shell Recycling Program.

Grow Louisiana Coalition is an organization of more than 74,000 supporters, companies and organizations increasing public awareness of the importance of the oil and natural gas industry to the state’s economy, and the way of life of more than 260,000 Louisianians working in and alongside the industry daily. For more information, visit www.growlouisianacoalition.com.

The Louisiana Oil & Gas Association was organized in 1992 to represent the Independent and service sectors of the oil and gas industry in Louisiana; this representation includes exploration, production and oilfield services. Our primary goal is to provide our industry with a working environment that will enhance the industry. LOGA services its membership by creating incentives for Louisiana’s oil & gas industry, warding off tax increases, changing existing burdensome regulations, and educating the public and government of the important of the oil and gas industry in the state of Louisiana.

Louisiana Mid-Continent Oil and Gas Association, founded in 1923, is the only oil and gas trade association exclusively representing all sectors of the oil and gas industry operating in Louisiana and the Gulf of Mexico. LMOGA serves exploration and production, refining, transportation, marketing and mid-stream companies as well as other firms in the fields of law, engineering, environment, financing and government relations.

LMOGA’s mission is to promote and represent the oil and gas industry operating in Louisiana and the Gulf of Mexico by extending representation of our members to the Louisiana Legislature, state and federal regulatory agencies, the Louisiana congressional delegation, the media and the general public.