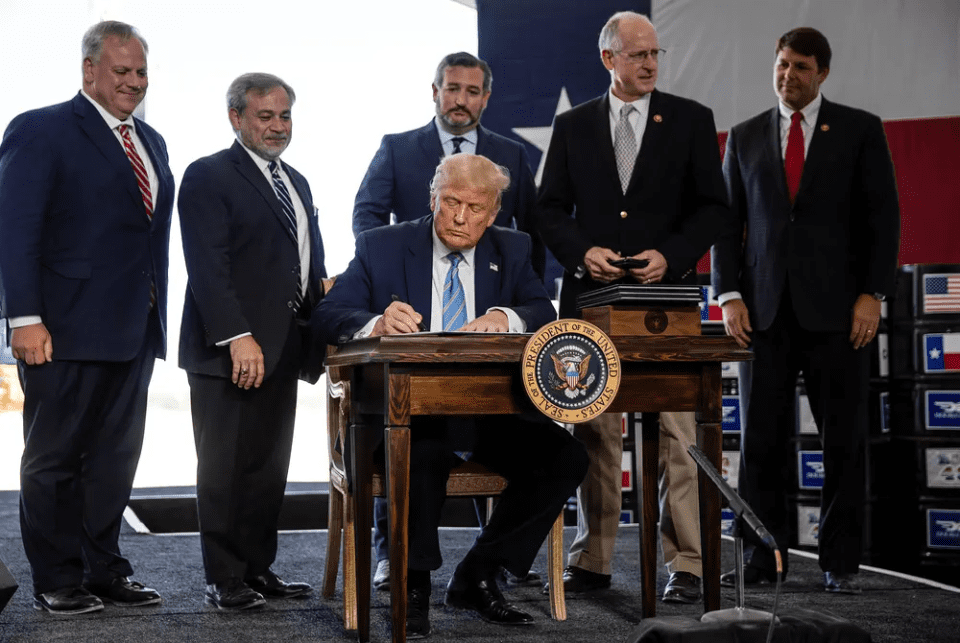 President Donald Trump sought to give a morale boost to the beleaguered Texas energy industry during a visit Wednesday to the Permian Basin, while also rallying oil and gas workers against Democrats ahead of the November election.

“We are telling the Washington politicians trying to abolish American energy: Don’t mess with Texas,” Trump said during an afternoon speech at Double Eagle Energy in Midland, after an oil rig tour and fundraiser in nearby Odessa.

Trump’s comments doubled as part campaign speech, part policy announcement, as he repeatedly assailed Democrats’ energy proposals and predicted their presumptive presidential nominee, Joe Biden, would not “do too well in Texas” as a result. Polls continue to show a close competition in the once-solidly red state.

As for policy, Trump announced an extension for liquified natural gas exporters, following through with the Department of Energy’s proposal earlier this year to extend export contracts through the year 2050. Trump also announced permits “granting approval to vital pipeline and railway infrastructure” along the U.S.-Mexico border, including “two permits allowing the export of Texas crude to Mexico,” which he signed, after speaking, alongside Texas Republicans who joined him in Midland.

For now, though, the industry continues to face severe headwinds from the coronavirus pandemic. Trump touted his administration’s actions to help the reeling industry earlier this year, including a deal with Saudi Arabia and Russia to drastically cut production.

“We were very close to losing a very powerful, great industry,” Trump said, “and now we’re back and we’re just gonna keep expanding.”

Among the permits that Trump signed was one that granted the company NuStar Energy permission to operate and maintain existing pipelines underneath the Rio Grande that transport hydrocarbons and petroleum products through a 46-mile pipeline from Hidalgo County into northern Mexico. Another permit Trump signed allows for Kansas City Southern Railway Co. to build and operate a new international railway bridge in Laredo, the type of cross-border project on the international boundary that requires a presidential permit.

Still, politics consumed a considerable amount of Trump’s speech, as he warned that the “radical left … is fighting to abolish American energy, destroy the oil and gas industries, and wipe out your jobs.”

Trump sought to tie Biden to the Green New Deal, the ambitious plan to combat climate change championed by freshman U.S. Rep. Alexandria Ocasio-Cortez, D-N.Y. Trump said the Green New Deal would “ban oil and gas leasing on all federal lands — and by the way, there’d be no fracking.” Biden has said he wants to end all oil and gas drilling on federal lands but that he does not support a total fracking ban.

While Texas officials welcomed Trump to the state by endorsing his “support of Texas energy producers,” the industry across the state has been harshly disrupted in 2020. At least 46,000 people working in the Texas energy sector have lost their jobs during the pandemic, and some workers in West Texas have said they don’t plan to return to the industry.

In the early months of the pandemic, energy job losses accounted for the highest number of jobless claims filed in dozens of Texas counties, and those workers could have serious trouble finding new jobs in the oil and gas sector for at least the rest of 2020, according to analysis by the Federal Reserve Bank of Dallas.

The state budget also depends heavily on oil and gas taxes, and Texas Comptroller Glenn Hegar said recently that the budget will face a $4.6 billion deficit in part due to the major decline across the oil and gas sector. Hegar said the industry will not bounce back soon.

“Most people really focus on price, but an equally important component is what is production volume,” Hegar told The Texas Tribune earlier this month. “Texas has lost a large number of rigs.”

The state typically makes up 50% of all the rigs in North America, but that has dropped to 40%, the lowest number recorded since the data first began to be tracked in the 1960s, he said.

Trump spoke at Double Eagle Energy after attending a fundraiser in nearby Odessa for his reelection campaign. The event was expected to raise $7 million, according to the Republican National Committee. Proceeds went to Trump Victory, a joint fundraising committee between Trump’s campaign and the RNC.

The luncheon was at the Odessa Marriott Hotel and Conference Center, and tickets started at $2,800. Supporters who gave $100,000 got to participate in a roundtable discussion with Trump beforehand.

The trip was Trump’s 16th visit to Texas as president but his first to the Midland-Odessa area, a Republican stronghold.

Poll after poll in recent months has shown Trump and Biden in a dead heat in Texas, which he carried by 9 percentage points in 2016, the smallest margin for a GOP presidential nominee here in two decades. Still, Trump said Wednesday it was a “great victory” and that he is now “leading what we had even four years ago,” even though surveys show the contrary.

Biden released a statement ahead of Trump’s arrival in Texas that focused on his response to the coronavirus pandemic, which has been on the rise in recent weeks across the state. Biden noted that Hurricane Hanna, which hit the Texas coast over the weekend, has made the situation in Texas “far more precarious.”

“Mr. President, now isn’t the time for politicking or photo ops,” Biden said. “Texans need a President with the experience and vision to fight for families no matter how many catastrophes reach our shores.”

The Democratic National Committee also denounced Trump’s handling of the virus with a daylong digital advertising campaign on the Odessa American’s homepage. The Texas Democratic Party held a news conference ahead of Trump’s visit to highlight how the pandemic has disproportionately impacted Latino Texans.

Afterward, the party noted in a statement that America surpassed 150,000 deaths Wednesday and said it “never had to be this bad” under Trump and Gov. Greg Abbott.

The coronavirus loomed large even before Air Force One touched down in Midland. U.S. Rep. Louie Gohmert, R-Tyler, who was expected to travel with the president, announced he had tested positive for the virus. Once Trump arrived, a Houston congressional candidate who was set to greet the president at the airport, Wesley Hunt, announced he had tested positive on his way there and returned home.

Correction: An earlier version of this article misspelled Permian Basin.

Kansas City Southern Railway and the Texas Comptroller of Public Accounts have been financial supporters of The Texas Tribune, a nonprofit, nonpartisan news organization that is funded in part by donations from members, foundations and corporate sponsors. Financial supporters play no role in the Tribune’s journalism. Find a complete list of them here.

“Trump rallies oil and gas workers in the Permian Basin against Democrats ahead of the November election” was first published at https://www.texastribune.org/2020/07/29/president-trump-texas-visit-oil-and-gas-permian-basin/ by The Texas Tribune. The Texas Tribune is proud to celebrate 10 years of exceptional journalism for an exceptional state.

Patrick Svitek is the primary political correspondent for The Texas Tribune. Patrick logged countless miles on the 2016 campaign trail, covering the many Texas angles of the momentous presidential race. He previously worked for the Houston Chronicle's Austin bureau. He graduated in 2014 from Northwestern University's Medill School of Journalism. He is originally from Fort Wayne, Indiana.

Mitchell Ferman is a reporter for The Texas Tribune covering energy and the economy from a base in Houston. Before joining the Tribune he was a reporter for The Monitor in McAllen, where he covered cross-border trade, politics and the city of McAllen. He also regularly freelanced from the Rio Grande Valley and beyond for The New York Times, Texas Monthly and Reuters, writing about topics including the family separation crisis and unexpected consequences of the border wall. He graduated from the University of Missouri.