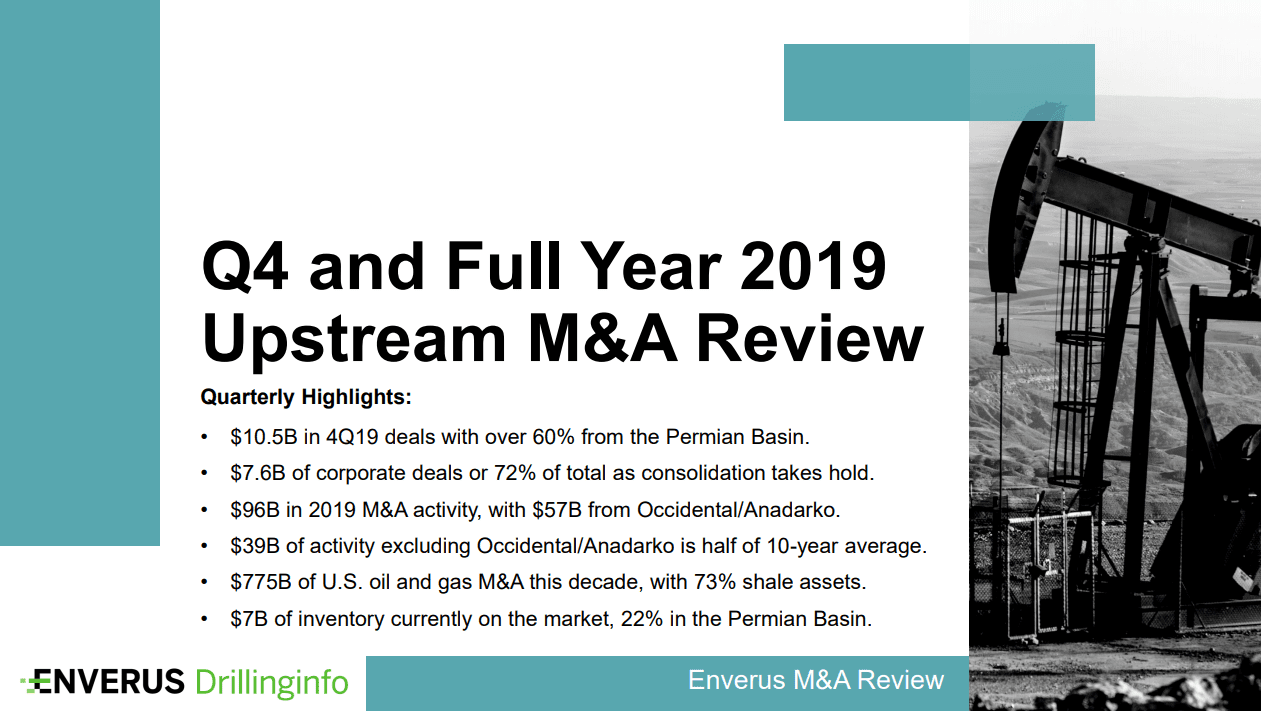 Austin, Texas – Enverus, the leading oil & gas SaaS and data analytics company, has released its summary of 2019 deal activity and its outlook for 2020. Enverus tracked $96 billion of U.S. oil & gas M&A in 2019, including $11 billion in Q4. However, the annual total was substantially skewed by Occidental’s $57 billion acquisition of Anadarko, which was also the largest deal of the decade and the fourth largest oil & gas deal ever.

Backing out the Occidental/Anadarko deal, 2019 saw $39 billion in deals or just one-half of the average $78 billion for annual U.S. oil & gas M&A during the last 10 years, which also saw the rise of U.S. unconventional assets. M&A played a key role along the way, with $567 billion spent on shale assets or 73% of the total during that time. E&Ps poured even more into funding drilling, including major ramp ups of oil output in the Bakken, Eagle Ford, and Permian Basin. However, the available capital that made shale possible largely dried up in 2019.

“Investors who funded the shale revolution over the last decade have become vocal in advocating for payouts and cut back on providing new capital. That flowed through to limited M&A and a negative reaction to deals for much of the year,” said Enverus Senior M&A Analyst, Andrew Dittmar. “However, we saw an uptick in December in the pace of deals and more positive investor reactions to acquisitions. That should bode well for M&A in 2020.”

Occidental’s acquisition of Anadarko highlighted 2019’s consolidation in the shale patch. The deal is in the ballpark of Exxon’s 2009 acquisition of XTO as the most spent on shale in a deal. Occidental saw 75% of Anadarko’s value in shale, including the Permian Basin.

WPX’s $2.5 billion acquisition of EnCap-funded Felix in December 2019 was notable for several reasons. Besides being the largest deal of Q4 and fourth largest deal of 2019, the acquisition of a premier private equity position in the Permian shows there are still exits available for the “built to sell” model of private equity portfolio companies. WPX also outperformed the broader markets on news of the deal, compared to most buyers being sold off on news of M&A.

The Permian continues to be a key driver of U.S. oil growth and a significant contributor to M&A including accounting for more than 60% of Q4 2019 value. From a buyer’s perspective, there are opportunities to shop for private equity portfolio companies that are ready for an exit or acquire the small and mid-cap public companies that have been beat up on Wall Street.

During the second half of 2019, smaller E&Ps showed an increasing willingness to accept lower buyout values as capital markets remained tight and financing options narrowed. Less well-capitalized companies that are still short of self-funding and generating positive free cash flow, have a limited set of options to avoid running up debt and facing a restructuring. Besides selling, some are turning to private capital to provide alternative financing options.

“Challenges for one company can mean opportunity for someone else and we’re seeing that on the private capital side,” remarked Enverus Market Research Director, John Spears. “During the exploratory and high growth years of shale, private equity was funding companies to drill and flip acreage. Today, private equity is providing a secondary source of capital to companies that need to grow but don’t have the financial means via joint ventures, drillcos, purchasing overriding royalties, and other arrangements.”

Tight capital raising options for potential sellers is one side of the equation for an M&A surge in 2020. However, for would-be buyers the outlook is more positive. After a year of cutting costs and focusing on efficiencies, larger companies look ready to turn the corner on free cash flow and are instituting dividends and share buybacks to reward investors. Their stock prices are also on the rise, aided by a combination of their own operational improvements and tailwinds from an improving global economic picture and rising oil prices.

As investors grow more confident in a company’s ability to deliver on free cash flow, they also become more open to acquisitions, provided asset quality is high and the price is reasonable. In addition, larger E&Ps should be better positioned to deliver on returns to investors by leveraging economies of scale, more efficient development, and more favorable service and midstream contracts. Consolidation in the shale patch can either take the form of acquisitions by multi-nationals or mergers among the smaller to midsize players like was seen in 2019.

“In the last ten years, we watched U.S. shale upend global energy markets and transform the U.S. into a net energy exporter,” concluded Dittmar. “We’re now at an inflection point where shale matures from a growth industry to one that generates dividends and share buybacks for its investors. Completing that transition and setting the stage for the next ten years will likely require a round of consolidation and 2020 sets up the needed pieces for this to occur.”

Enverus is the leading data, software, and insights company focused on the energy industry. Through its SaaS platform, Enverus provides innovative technologies and predictive/prescriptive analytics, empowering customers to navigate the future. Enverus’ solutions deliver value across upstream, midstream and downstream sectors, enabling the industry to be more collaborative, efficient and competitive. With more than 1,000 employees across the globe, the Company’s solutions are sold to more than 6,000 customers across 50 countries. Enverus is a portfolio company of Genstar Capital and brings together the technology of Drillinginfo, PLS, 1Derrick, MineralSoft, Midland Map Co., MarketView, DataGenic Group, PRT, Oildex, Cortex, Red Dog Systems and RigData as one company. Creating the future of energy together. Learn more at www.enverus.com.