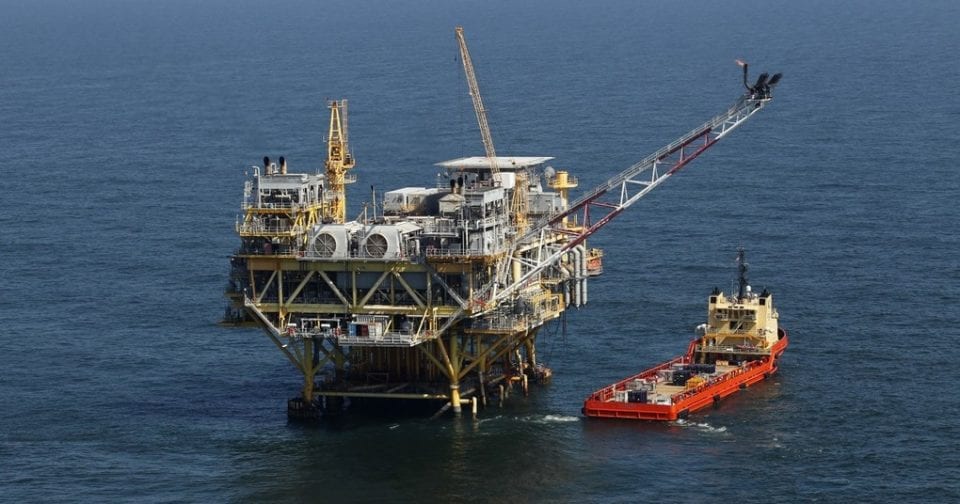 Joe Biden’s proposal to ban new offshore oil and gas drilling in federal waters would cost nearly 200,000 jobs, strip the U.S. government of billions in dollars of revenue, and potentially push production to other countries, according to a new study commissioned by the industry’s trade group.

Joe Biden’s proposal to ban new offshore oil and gas drilling in federal waters would cost nearly 200,000 jobs, strip the U.S. government of billions in dollars of revenue, and potentially push production to other countries, according to a new study commissioned by the industry’s trade group.

The study, released Tuesday by the National Ocean Industries Association, does not name Biden. But its release is intended to underscore the potential consequences of Biden’s proposal to prevent the U.S. government from issuing new oil and gas drilling permits in federal waters, which had experienced record oil production before the coronavirus halted demand.

Nearly all U.S. offshore drilling occurs in the western and central portions of the Gulf of Mexico, where nearby states are mostly reliably Republican. But the report shows jobs that support the offshore oil and gas industry, which is capital-intensive and reliant on the manufacturing of associated equipment such as sensors and pipes, are present in nearly all 50 states.

“You have this economic machine that is the Gulf of Mexico oil and gas industry that really feeds into the whole country,” said Erik Milito, president of the National Ocean Industries Association. “You destroy so much when you take it away.”

In 2019, offshore oil and natural gas industry, directly and indirectly, supported roughly 345,000 jobs in the United States, a number that the study projects to increase to 370,000 jobs on average between now and 2040, absent new policy. The industry study, produced by Energy and Industrial Advisory Partners for the National Ocean Industries Association, projects average employment to decline to 179,000 jobs under a permitting ban.

“It would definitely mean a significant slowdown of the offshore oil industry over time,” said Tyler Priest, an offshore drilling historian at the University of Iowa who was unaffiliated with the study. Priest was a member of the 2010 National Commission on the BP Deepwater Horizon Oil Spill created by President Barack Obama.

Priest said he expects the biggest job losses to be felt by contractors who are hired to do seismic surveys of newly leased offshore waters, along with companies that drill exploratory wells on new leases. He notes that offshore workers don’t necessarily live near the Gulf since projects employ a two-weeks on, two-weeks off schedule.

Biden and other proponents of reducing fossil fuel production on federal lands and waters argue it is a necessary step to sufficiently reduce emissions that cause climate change.

“It’s such an obvious first step to a clean energy economy,” Rep. Jared Huffman, a California Democrat and a member of the House Select Committee on the Climate Crisis, recently told the Washington Examiner. “You just can’t keep digging the hole deeper.”

The new study focuses specifically on the implications of restricting oil and gas development in the Gulf of Mexico, accounting for 15% of the nation’s oil production in January.

A much lesser amount of natural gas is produced offshore, less than 5%.

The study assumes the government would issue no new drilling permits beginning in 2022, but that permits already approved for companies with existing leases would be unaffected (Biden’s proposal only affects prospective drilling permits). Leases for oil and gas development in the deep waters of the Gulf of Mexico usually last 10 years, giving companies exclusive access to certain acreage, but producers must get periodic approval from the government during that time for drilling permits.

Biden’s official campaign plan says that he would “ban new oil and gas permitting on public lands and waters,” which appears to mean he would stop the government from issuing approvals for drilling through the duration of a lease, even if the lease was issued before Biden took office.

The study projects that oil and natural gas production from the Gulf of Mexico would decline on average by more than 55% to 1.1 million barrels per day until 2040, compared to what would be expected with no leasing restrictions.

The study says offshore oil and natural gas production in the year 2040 would fall to 323,000 barrels per day compared to 1.96 million barrels per day with no leasing ban.

It also projects government revenues to fall with an offshore permitting ban, given the royalty payments and other fees that companies pay for producing on federal lands. Revenues to the government, some of which are distributed to Gulf Coast states, would average around $2.7 billion per year through 2040, compared to $5.4 billion in 2019.

Milito acknowledges that offshore oil and gas producers are already facing a “dire” situation because of the coronavirus-fueled price crash, but he expects the industry to bounce back.

“There is a substantial possibility there will be many companies that don’t survive this,” Milito said.

Milito and Priest say offshore drilling, while expensive, is more productive on a per-well basis compared to onshore shale production.

“Everybody thinks the shale has us covered, but the industry is still very committed in making investments in deep water projects,” Milito said.

They said a drilling ban would push offshore production to other parts of the world, to places like Brazil, Angola, Nigeria, Mozambique, and Guyana, as long as there is a continued demand for oil and gas.

“If you are focused on practical measures to reduce emissions, focus on the demand side, not supply,” Priest said. “This is a misguided policy.”

Sourced through Scoop.it from: www.washingtonexaminer.com

Key Trends in Drone Applications in the Oil and Gas Industry