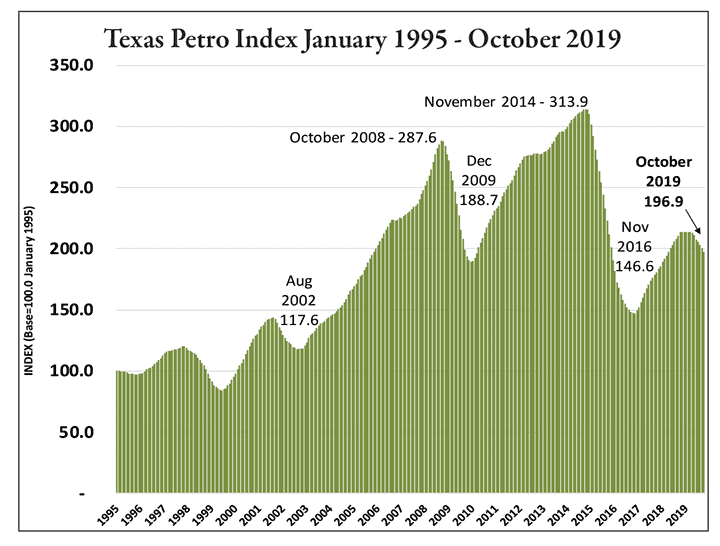 The oil and natural gas industry in Texas and the United States established record levels of production in 2019 and even became a net petroleum exporter for the first time since records have been kept.

All of this is great news for producers and consumers. Producers are happy with the increased production volume, which generally means more revenue. Consumers are happy because the increase means more stability, and in this case, a reduction on price for petroleum products, such as gasoline and electricity.

On the other hand, the increase in supply has created an oversupply of both oil and natural gas in Texas resulting in softer prices. Oil prices have declined 25 percent from $67.19 per barrel in October 2018 to $50.25 for West Texas Intermediate posted price in October this year. Natural gas took a much bigger hit dropping 46 percent from $2.82 in October 2018 to $1.52 this October, as reported by the Texas Petro Index.

“Oil and gas activity in Texas is in a state of decline in 2019, though it could obviously be much worse” observed economist Karr Ingham, author of the Texas Petro Index.  “Crude oil prices are down from their peak in October 2018, but rather than continue to decline, prices have stabilized in the $50-55 range, and higher at times.  The fact that crude oil prices remain steady, but below their recent cyclical peaks, suggests a market that is generally well-supplied, and this is a win for household and business consumers in the US.”

Ingham said other factors are at work in terms of downward pressure on upstream oil and gas activity as well.  “It is true that the providers of development capital have reigned in operators, placing a premium on positive returns on capital rather than growth,” he said.

“The natural gas issues, especially in the Permian, continue to hamper crude oil development activity to some degree as pipeline capacity, while somewhat improved, remains insufficient to move the associated gas production to the marketplace,” he said.

“But mostly, it is a 20% decline in crude oil prices that has pushed activity levels downward this year.  Investor sentiment and operator attitudes would change for the better given a $20 increase in the price of crude oil,” Ingham said.

Automation and IoT in the Oil Industry