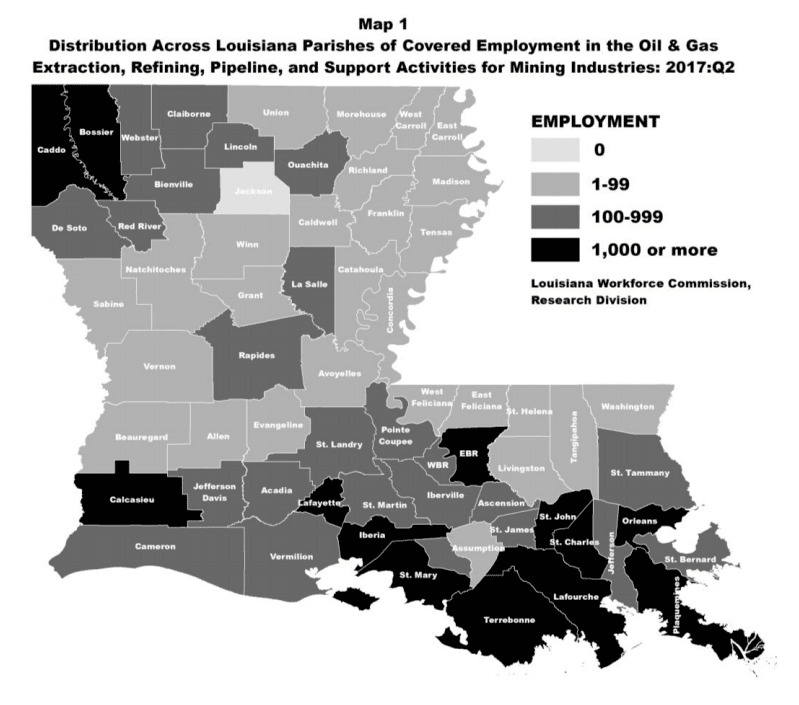 Lafayette, La. – April 17, 2018 – Noted economist Dr. Loren C. Scott’s latest study, “The Energy Sector: Still a Giant Economic Engine for the Louisiana Economy,” reinforces what hundreds of thousands of Louisianians already know: the oil and natural gas industry continues to be the economic foundation of both the state and Lafayette Parish. With more than 9,000 energy employees in the Parish making an average annual wage of $85,840 – $40,000 more than the median income in the state – it is clear that the energy industry is critical to Lafayette’s employment, budget and economic success.

Other figures of note:

“In the face of an unpredictable tax system, countless misguided legal attacks and an industry downturn, this study proves the oil and natural gas industry’s continued dedication to the state of Louisiana and the Acadiana region,” said Marc Ehrhardt, Grow Louisiana Coalition executive director. “With all of the cards stacked against the industry, it continues to provide billions in tax revenues and hundreds of thousands of jobs for our state. We cannot take this for granted. For our state’s future, we must make sure that Louisiana is on top of the list for companies looking to invest by stopping reckless lawsuits and partnering with the industry.”

To demonstrate the significance of the industry in Louisiana’s economy, Dr. Scott says, “It is helpful to think of the state as one large economic pond. Into the pond a rock is dropped labeled ‘energy industries.’ But this is not a pebble – it’s a substantial stone that creates a huge splash with ripples to the edge of the pond.”

In the study, Dr. Scott analyzed the oil and natural gas exploration and production, refining and pipeline industries and found that, even when the oil and natural gas sector is in a serious recession, the industry paid nearly $5.3 billion in wages for Louisiana workers in 2017 – five percent of total wages in the state that year. In fact, last year, energy jobs and earnings were found in 63 of Louisiana’s 64 parishes. Additionally, of those parishes, 13 had 1,000 workers each who were employed by the energy industry.

While the oil and natural gas industry generates more than 260,000 jobs in Louisiana, it is also building communities, neighborhoods and local economies for the workers and their families. In fact, for every job created in the energy sector, 3.4 additional jobs in other sectors are created. For example, in 2017 there were 3,724 people working at ExxonMobil Refinery in Baton Rouge but only 1,250 of those workers wore ExxonMobil shirts and the other 2,474 workers wore shirts like Performance Contractors, Turner Industries, etc. These jobs, which are vital to operations at the plant, are the small business owners, the construction workers and the neighbors that make our Louisiana communities the places we know and love.

Dr. Scott’s study also analyzed the effect of the industry on government-funded jobs, like teachers. He evaluated the salaries of teachers in Louisiana, an industry-heavy state, against the salaries of neighboring Mississippi, which has a much smaller industry presence. Partly due to the increased taxes paid by the industry, teachers in Louisiana, on average, make over $7,000 more each year than teachers in Mississippi. Clearly, the impact of the energy industry on Louisiana’s workforce stretches far beyond the facilities themselves.

The 2018 update, “The Energy Sector: Still a Giant Economic Engine for the Louisiana Economy,” is the sixth edition of this industry analysis; the first occurring in 1996.

Link to the report: https://www.growlouisianacoalition.com/economicimpactreport.