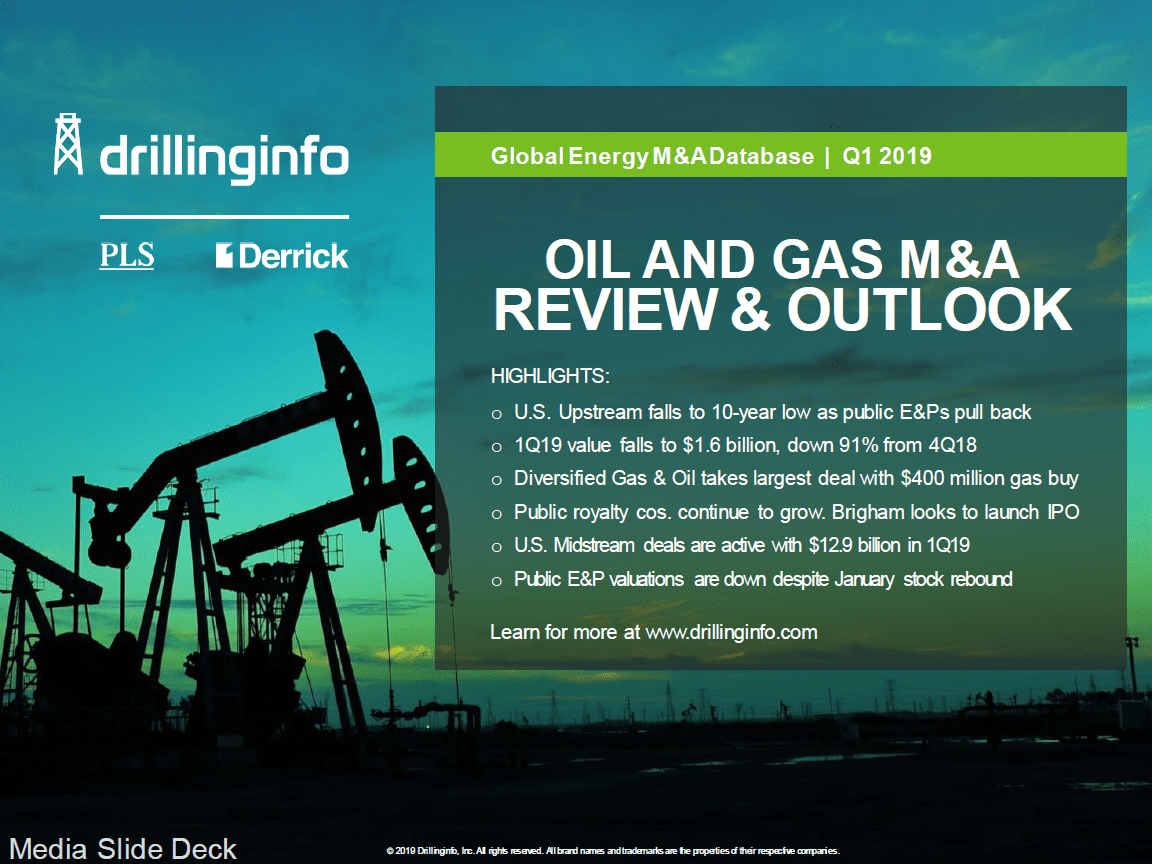 Austin, Texas – Drillinginfo, the leading energy SaaS and data analytics company, reported today that U.S. oil and gas M&A deal values have plunged to a record 10-year low in the first quarter of 2019. A slump that began in late 2018 has carried over into the new year and the $1.6 billion in Q1 deals is down 91 percent from Q4 2018, and down 93 percent compared to Q1 2018. The slump follows the $82 billion in deals in 2018 that set a four-year record high.

“The market for upstream deals came to a halt in late 2018 with the combined pullback in oil prices and equities,” said Drillinginfo M&A Analyst Andrew Dittmar. “Since then, oil has rebounded by 20 percent and E&P stocks are up 15 percent, albeit with nearly all those stock price gains taking place in early January. However, deals haven’t returned in a meaningful way and we believe that is being largely driven by Wall Street,” said Dittmar.

Remaining consistent with Drillinginfo analysts predictions at the start of the year, a confluence of factors drove deal values down, including the rapid 40 percent drop in oil prices in late 2018. The primary contributing factor appears to be Wall Street’s pressure to deliver on free cash flow and weak equity and debt markets available to fund deals. Meanwhile, private equity – which has in recent cycles stepped in as an opportunistic buyer to take advantage of pullbacks by public E&Ps – has largely sat on the sidelines.

The Drillinginfo analysts continued by highlighting that the lack of buying enthusiasm appears to be changing the game plan for would-be sellers. While there are significant assets for sale, perhaps most notably BP’s major push to sell non-core U.S. properties, some companies are using “soft” marketing processes that only reach out to a few, select potential buyers. This is particularly true for private equity-backed E&Ps, which have historically been selective in choosing their entry and exit points. While some smaller positions may be sold or merged into larger portfolio companies, these firms have no intention to give away their prime positions in major plays during a down market. The inflection point, when positive, sustainable free cash flow is reached, remains the key for the U.S. shale business.

“Having just concluded Q4 2018 earnings and announcing 2019 playbooks, most operators pivoted strategies to appease Wall Street including throttling back on growth and capex to focus on moving sustainable free cash flow forward,” added Drillinginfo Senior Director Brian Lidsky. “In theory, the current struggles of smaller E&Ps sets the stage for consolidation, with larger players able to leverage premium valuations and operating efficiencies to acquire smaller competitors. Whether these operators will step up remains to be seen,” said Lidsky.

Drillinginfo analysts pointed to another potential outcome that could involve private capital coming forward as a buyer of public E&Ps – if they see distressed valuation opportunities, as was seen earlier in the year with Elliott’s currently unaccepted $2.55 billion (including debt) bid for QEP Resources.

Ultimately, 2019 could be a watershed year for U.S. shale. If free cash flow is reliably demonstrated, Wall Street’s approval is likely to return along with capital for deals. Given the current backlog of assets, there could be a rapid return of activity once the outlook improves.