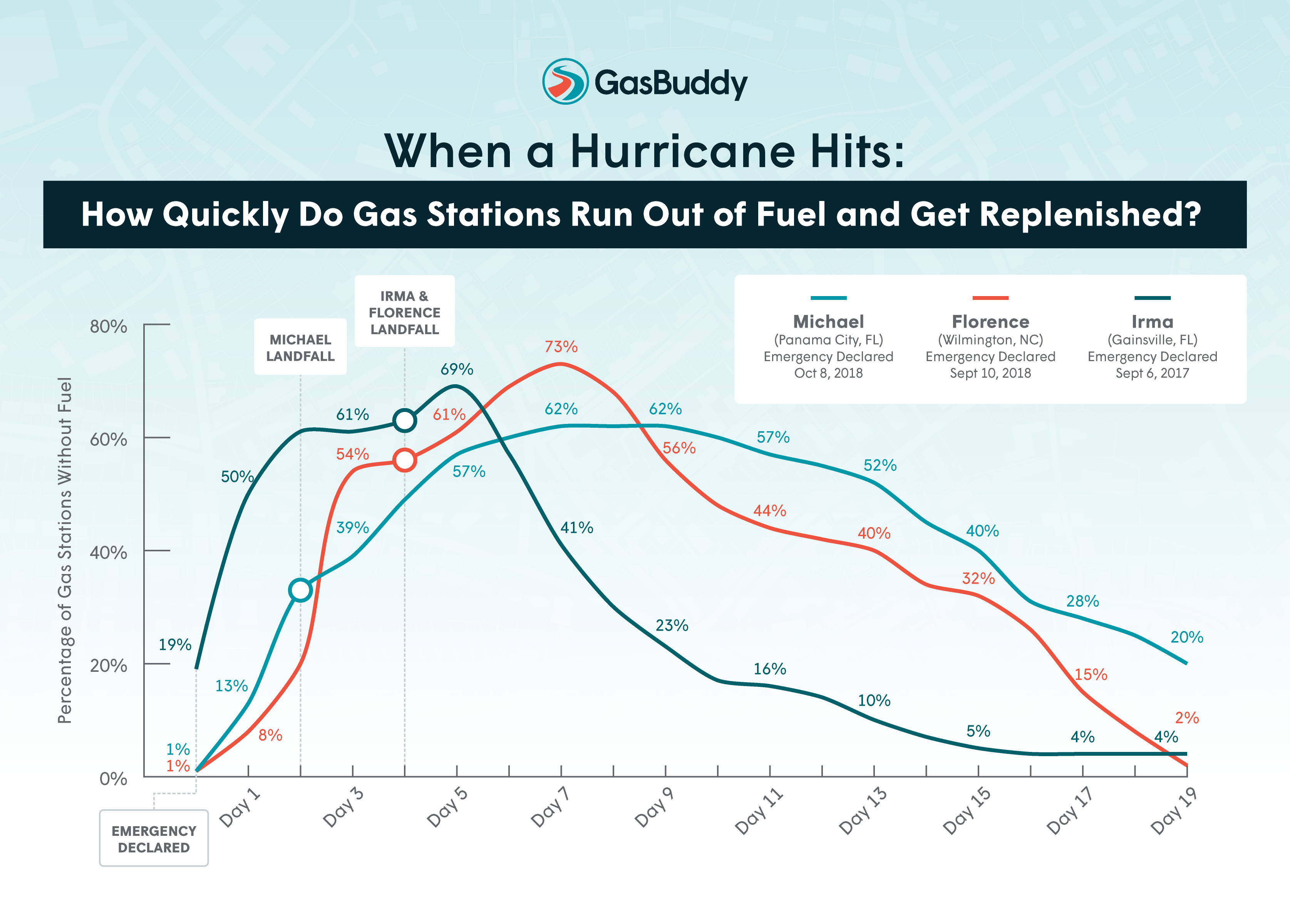 BOSTON — Hurricane Barry was the first storm to strike the US coast this year, bringing extensive rain and flooding to Louisiana and the region. With hurricane season in full effect, GasBuddy, the smartphone app that helps consumers avoid paying full price for fuel, offers information on fuel outages and fuel replenishment efforts during major hurricanes in the past three years based on millions of real-time fuel outage reports provided by consumers and gas stations on GasBuddy’s fuel outage tracker.

“Hurricanes can have a profound impact on gasoline supply, but it’s typically the fear of running low on gasoline that has an impact on supply before the storm does. Even so, retailers have been quick to respond once an area sees intense demand, and most areas begin to see improvement within a week of landfall of a major hurricane,” said Patrick DeHaan, head of petroleum analysis at GasBuddy. “So many factors go into supply and demand before and after a major storm – things like location, infrastructure, expected path, refinery location, power supply – that make it impossible to predict the exact moment when fuel networks are in the clear or begin to recover, but we definitely have seen fuel supply becoming a larger focus for government during hurricane season.”

“Hurricane Michael was the first category 5 hurricane to hit the U.S. since Andrew in 1992, but made landfall in Florida, a state with less petroleum infrastructure and also away from refineries. In addition to the fast moving storm, this meant that it took longer for stations to resupply, and the strength also led to more damage making it challenging. With Irma, Florida had been on high alert from Harvey and due to outages at Gulf refineries was already dealing with supply challenges but was quick to jump into action with barges carrying fuel that were able to enter ports after the storm passed. Meanwhile, Harvey’s idling over many refineries led to outages, but the area was able to get back on its feet fairly quickly because the sheer number of refineries was higher than other regions,” DeHaan said.

Post-Irma refueling efforts made a significant impact in Gainesville almost immediately after the storm passed, with Hurricane Florence following a similar pattern. Refueling efforts for Hurricane Michael took significantly longer to complete due to the devastation in Panama City. Twenty percent of gas stations were reported without fuel 17 days after the storm struck.

“With gas stations damaged or destroyed after Michael, there severe challenges getting fuel networks back to normal. It took longer than usual to resupply a smaller number of stations due to debris and the slow pace of recovery, including power restoration.”

Based on the information from fuel outage data in the United States, GasBuddy offers these recommendations to consumers in hurricane-affected areas:

GasBuddy examined its fuel outage reports from Hurricanes Irma (September 2017), Florence (September 2018) and Michael (October 2018) in the highest-impact areas relative to each storm, noting the amount of time taken to reach the peak station outages as well as the time taken to resupply gas stations with fuel in the affected areas.

GasBuddy’s mission is to help consumers avoid paying full price for fuel. As the leading source for crowdsourced, real-time fuel prices at more than 150,000 gas station convenience stores in the U.S., Canada and Australia, millions of drivers use the GasBuddy app and website every day to find gas station convenience stores based on fuel prices, location and ratings/reviews. GasBuddy’s first-of-its-kind fuel savings program, Pay with GasBuddy, has saved Americans more than $7 million at the pumps since its launch in 2017. The company’s business solutions suite, GasBuddy Business Pages, provides Fuel Marketers and Retailers their best opportunity to maintain their station information, manage their brand, and promote to their target consumer audience. For more information, visit http://www.gasbuddy.com.

Keep Your Eye Close to the Ground