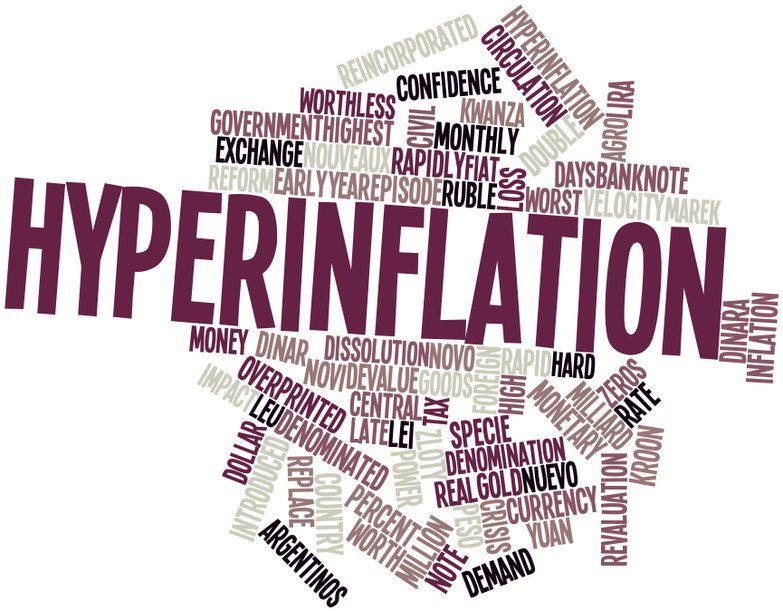 Find out why rising crude oil prices could pose a hyperinflationary threat to the U.S. economy.

Crude oil prices and inflation are inextricably linked. In other words, as crude oil prices increase, inflation—a general rise in the price of goods and services throughout the economy—follows in the same direction. Today, easy money and the Biden administration’s climate agenda could drive crude oil prices to a new and dramatic all-time high. As the oil and gas industry attempts to regain pre-pandemic fundamentals, the U.S. Federal Reserve System (“the Fed”) continues to expand the money supply, which could put inflation in overdrive—otherwise known as hyperinflation.

Hyperinflation: History In The Making

Think back to the end of 2007 when the housing market collapsed, and huge corporate bailouts became the norm. The term “Quantitative Easing” (QE) was the new tool the treasury adopted to help stimulate the economy. Over the next five years and three rounds of QE, the Fed increased the money supply by almost $3.5 trillion. Once the economy was on firm footing, “Quantitative Tightening” (QT), or removal of the stimulus, was to occur. Strangely enough, to implement QT in 2018, the rapid increase in interest rates stoked fears of an equity market crash and the initiative was quickly abandoned.

By comparing the velocity of money (“VM1”)— how quickly money is turned over in the economy—we can begin to track consumer expectations when assessing the economy from a macro perspective. In the example below, #1 indicates the mirroring behavior between the VMI and the S&P index. Coming out of the 9/11 recession in 2002, you can see that when prices start to pick up, so does the velocity. This continues through 2007 until the credit crisis struck. The thing to notice (as referenced in #2), is that the S&P growth occurred within an artificial environment. The continued slowing of VM1 indicates the economy never fully recovered. 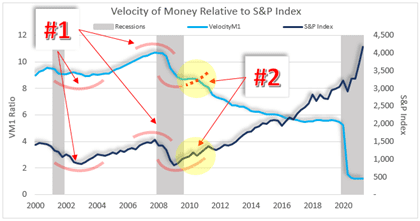 Pandemic-Induced Hyperinflation On Its Way

Most recently, shutting down an already damaged economy due to the COVID-19 pandemic only compounded the issue. Going back to the same playbook, the Fed injected over $3.5 trillion of new stimulus money (aka “COVID relief”) into the money supply. What took five years to do with QE was now duplicated in less than a year. This means that we currently have around $7 trillion of government-directed stimulus floating in the system. The worst part is that an additional $6 trillion of the COVID/infrastructure bill is currently being debated in Congress. Not only are these numbers staggering, but the rate at which it hits the economy is ripe to spur hyperinflation. 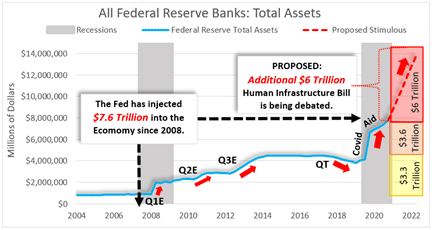 With such rapid expansion of the money supply, it’s only a question of when hyperinflation will hit.  Commodity prices across the board are up. Bloomberg’s commodity index, which reflects commodity futures price movements, is currently at a six-year high. In addition, several of my internal models are currently valuing West Texas Intermediate (WTI) crude oil in the $90/bbl range. In one simple economic model, the relationship between the Dollar Index (DXY) and VM1 is used to guide expectations about future WTI prices. Given the government’s insatiable thirst for spending, it’s not unreasonable to assume a negative VM1 and a new low (less than 70) for the DXY index. Therefore, I would expect WTI to trade north of $180/bbl by the end of next year.

Further, with the existing and potential levels of unprecedented stimulus, we’re operating in uncharted waters. The government won’t correct its course until it’s forced to do so. Hyperinflation “breaks” their game. They’ll be stuck between increasing rates to slow price inflation and decreasing rates to spur recovery. The only alternative remaining is to reduce the money supply and accept all the painful ramifications that will result from it. 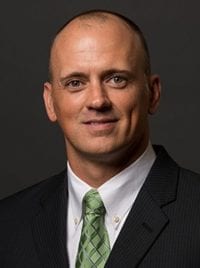 Ryan is a Director at Opportune LLP. His industry experience includes commodity trading, risk management, supply chain optimization and derivative valuation. He is an expert in developing financial models to quantify complex/uncertain issues and deliver real-world solutions. He has extensive experience in the pricing, hedging and portfolio management of the retail natural gas markets. Ryan has led all aspects of commercial-deal structuring and pricing for wholesale natural gas trading and origination. He has over 15 years of experience in the energy industry. Ryan has an MBA from the University of Texas in San Antonio where he specialized in Finance.

The Importance of Precision Measurement Equipment in Oil and Gas Processing