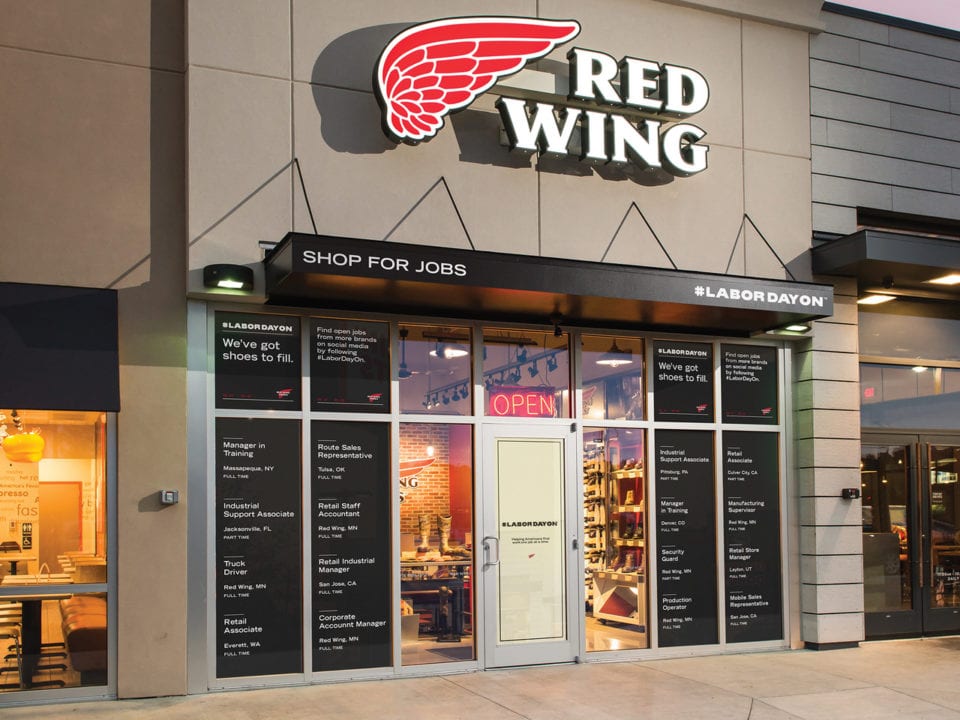 Minnesota-Born Boot Company to Promote Jobs, Not Boots, Transforming Its More than 525 Stores into Job Centers, Turning Its Customer Service Line Into a Job Search Hotline and Flipping Its Marketing Channels to Highlight Available Job Positions

Red Wing, Minnesota – Red Wing Shoe Company, a global leader in the footwear industry for more than 115 years, today announced its intention to bring back the true meaning of Labor Day with its #LaborDayOn initiative, which will look to help the 25 million unemployed Americans find jobs by switching from promoting its purpose-built footwear to promoting jobs. Red Wing is calling on brands to join them in using their own social, marketing and retail channels on Labor Day to post all job openings they have available or know about using the hashtag #LaborDayOn. And to show they’re serious about #LaborDayOn, Red Wing will be transforming over 525 of its stores into hubs for people to search for local trade jobs.

For 115 years, Minnesota-born shoe company Red Wing has made boots for those who have built America. But today more than 25 million Americans have lost their jobs. As Labor Day quickly approaches, a day dedicated to the economic achievements of American workers, it will be foreshadowed by one of the highest unemployment rates in over 100 years. Inspired by this current crisis, Red Wing is turning a holiday that’s become synonymous with discounts, sales and doorbuster deals back into a day for the American worker. 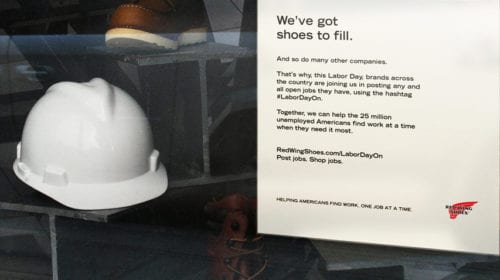 To get the word out and give people more access to job opportunities, Red Wing took out a New York Times ad today to call on other brands to join the #LaborDayOn movement by posting any and all job openings they have on September 7.

In addition to switching their stores into job hubs, they’re also transforming their customer service line, 800-RED-WING, into a job search hotline to offer both free guidance as well to help connect the unemployed to more open positions. Finally, Red Wing has swapped product for potential (job listings) in its latest advertising film that features clickable, open positions that link to open jobs at Red Wing.

“Red Wing knows that by shining the light on even just one job, this could be the first step in an opportunity for someone to find work and support their family. Our hope is to start a movement and leverage our own channels to highlight these jobs and help Americans end Labor Day on a high note — with a new job to celebrate,” said Dave Schneider, Chief Marketing Officer at Red Wing Shoe Company. “But we know as one brand we can’t do it alone. That’s why we are calling on brands across the country to join us on reclaiming Labor Day for the workers of this country. And right now, that means helping as many Americans as we can get back to work.”

#LaborDayOn (because remember, someone can’t take the day off if they don’t have a job).

For more information and to view the film, visit RedWingShoes.com/LABORDAYON.

About Red Wing Shoe Company
Red Wing Shoe Company Inc. is a global leader in the design, production and distribution of work, safety and lifestyle footwear and work apparel. Established in 1905 in Red Wing, Minnesota, today the privately held company’s family of brands includes Red Wing®, the premium choice for purpose-built work footwear, workwear and accessories including a collection of Heritage styles created for any occasion; Irish Setter®, the footwear brand of choice for hunters and workers who want uncompromising quality and technological innovation; Vasque®, a pioneer of performance hiking footwear; WORX™, a trusted brand for the industrial safety footwear market; and S.B. Foot Tanning Company, one of the largest U.S. producers of fine tanned leather for footwear and leather goods. Its brands are distributed to more than 110 countries in an immersive multichannel environment of 525+ Red Wing retail stores, third-party partners, and owned e-commerce platforms. The Red Wing Shoe Company employs more than 2,000 employees worldwide and operates two U.S. manufacturing facilities in Red Wing and Potosi, Missouri. For more information, please visit redwings RedWingShoeCo.com.