The Texas Alliance of Energy Producers’ Texas Petro Index (TPI) dropped steeply from March to April as the state’s oil and gas economy began to register the full effects of COVID-19, the Saudi-Russian price war, and the resulting economic shutdown. The TPI is a monthly measure of growth rates and cycles in the Texas upstream oil and gas economy, based on indicators such as price, rig count, drilling permits, well completions, and employment. The index is based at 100.0 in January 1995.

“The Texas upstream oil and gas economy was already in a state of decline when COVID-19 came along, with drops in the number of working rigs and industry employment, but the rate of decline has obviously accelerated sharply in March and April,” said Karr Ingham, Alliance Petroleum Economist and creator of the Texas Petro Index. “The worst of the demand contraction is clearly behind us at this point, and hopefully we’ve seen the worst of the crude oil price environment in April as well. However, the fallout will continue for some time with more to come in the way of employment loss and idled production capacity, and the Texas Petro Index is certain to continue its decline in the coming months.” 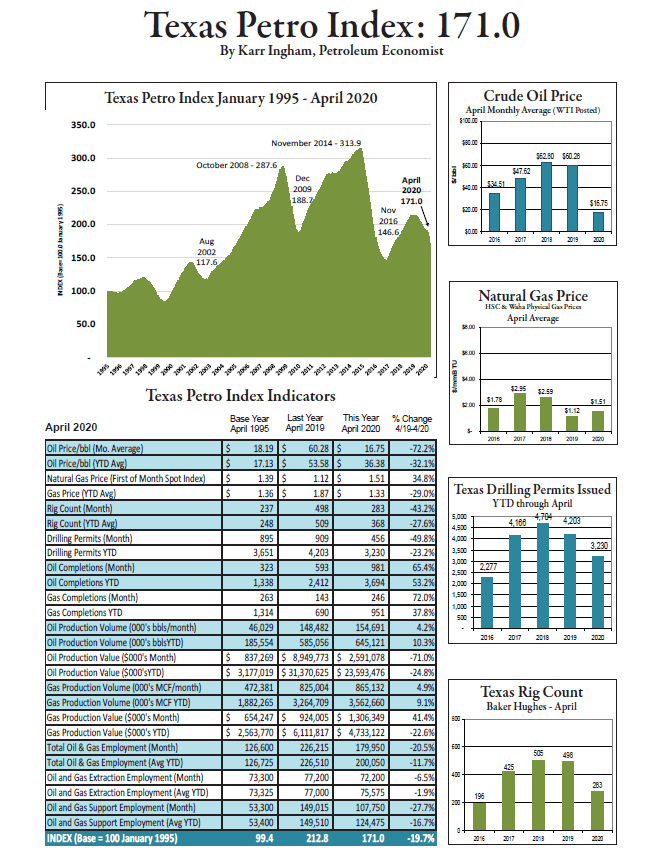 Most components of the TPI declined from March to April, with the exception of oil and gas well completions and natural gas prices.   Completions is a lagging indicator that reflects pre-COVID drilling activity.  Natural gas prices were higher thanks to stronger Permian gas pricing in April based on the prospect of lower associated gas production in the region.

“The upstream oil and gas employment sector, reflecting jobs with operating and producing companies, oilfield service companies, and drilling companies, shed an estimated 25,800 jobs from March to April, easily the largest monthly drop on record in terms of the number and percentage of jobs lost,” said Ingham.

Overall Texas oil and gas employment fell to a 10-year low in April. The monthly estimated upstream employment level of just under 180,000 jobs fell to the lowest level since March 2010. By contrast, industry employment in Texas fell to a cyclical low of 181,600 jobs in September 2016 during the 2014-2016 industry downturn.

Of significance is the crude oil production drop from March to April as statewide production embarks on its first sustained decline since 2015-2016, according to Ingham:

“These numbers are very difficult to estimate in the near term, especially during a period of rapid transition from growth to decline. However, by our estimates daily crude oil production declined by about 235,000 barrels from March to April, by far the largest monthly decline on record with more to come in May. This is important, because the discussion surrounding proration in Texas was whether the state should mandate production decreases by Texas operators as opposed to allowing the market to take its course. This makes it clear that market-imposed production declines in response to crashing demand and lower prices are rapidly adjusting Texas supply to current market conditions. Importantly, Texas operators will also need the flexibility to respond as prices recover.”

In addition to shut-ins of current production, capital spending and new drilling has fallen sharply as well.  The statewide rig count in April dropped by 111 rigs on average for the month compared to March and continues to decline. Incredibly, the 456 original drilling permits issued in April is the lowest monthly level since at least January 1994, the year data collection began for the Texas Petro Index, which is based at 100.0 in January 1995.

About Texas Alliance of Energy Producers

The Texas Alliance of Energy Producers is the most knowledgeable and effective statewide oil and gas association in the nation. Serving more than 3,000 members, the Alliance provides a voice for sound U.S. energy policy. These individuals and organizations – from small independents to publicly traded companies – are the driving force behind the U.S. energy renaissance. Founded in 1930, the Alliance celebrates its 90th anniversary this year. For more information, visit https://www.texasalliance.org/ and @TexasAllianceEP.