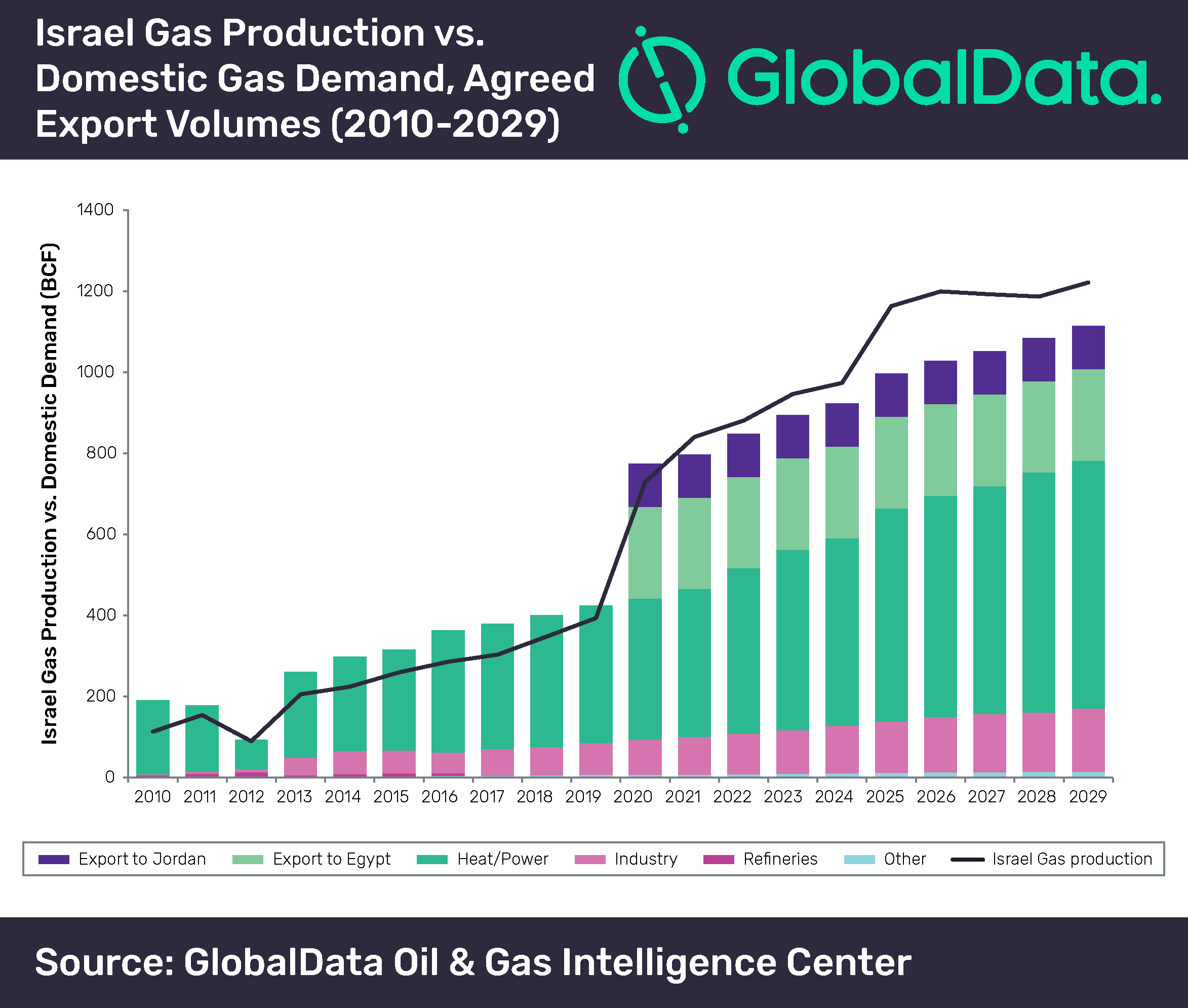 Israel has gone through an energy production revolution owing to discoveries of natural gas resources such as the Tamar and Leviathan fields over the past decade. Against this backdrop, the country’s gas production will significantly exceed demand and it will emerge as a gas exporter in the Eastern Mediterranean region by mid-2020s, says GlobalData, a leading data and analytics company.

The company’s latest report reveals that gas demand in Israel is forecast to increase significantly to more than 800 billion cubic feet (bcf) in 2029, mainly due to the government commitments to COP 21 (Paris agreement) environmental targets and plan to reduce the dependence on coal over the next decade.

Somayeh Davodi, Upstream Oil & Gas Analyst at GlobalData, comments, “For the first time in late 2019, Israel’s gas production is forecast to balance with its total gas consumption owing mainly to Tamar, which started production in 2013 supplying around 950 million cubic feet per day (mmcfd), and the ramp up of Leviathan Phase 1A, which will supply around 200 mmcfd to the domestic market.”

Davodi continues: “When the existing discoveries of Leviathan and Karish start producing, gas production in Israel will significantly exceed demand and it will be necessary to export surplus gas. However, Israel’s precarious geopolitical situation makes its position more sensitive in the existing highly competitive energy market in the region. Especially since neighboring countries have also discovered new gas resources such as Aphrodite in Cyprus and Zohr in Egypt, competing with future Israeli gas in local markets.”

Export agreements to Jordan and Egypt have already been agreed for the Leviathan Phase 1A gas volumes. A contract was signed between Israel and Egypt in 2018 to export 2,258 bcf of gas over a decade via pipeline. Israel will also export 106 bcf gas per year to Jordan starting from 2020 through a 65 kilometer (km) pipeline.

However, Israel will also need access to additional markets; otherwise, it will not be able to export large quantities of natural gas. Upstream projects such as Leviathan Phase 1B and future expansions of Leviathan and Karish will not be possible without additional export routes and new investment in exploration is likely to be limited as well.

Davodi concludes: “The Eastern Mediterranean is an exploration hotspot, with a string of multi tcf discoveries over the past few years, which could be possible alternatives to the Israeli gas in the neighboring countries and Europe. Israel hopes to sign a deal for the construction of the 2,000 km EastMed pipeline, which will cross from Israel and Cyprus into Greece and later via Poseidon IGI pipeline to Italy. The project is designed to export 353 bcf of natural gas per year from the Leviathan basin (in Israel and Cyprus). However, this project is at a very early stage with no firm commitments made towards its construction and any failure in Israel’s export strategies will directly affect the investment going into Israel’s upstream sector.”