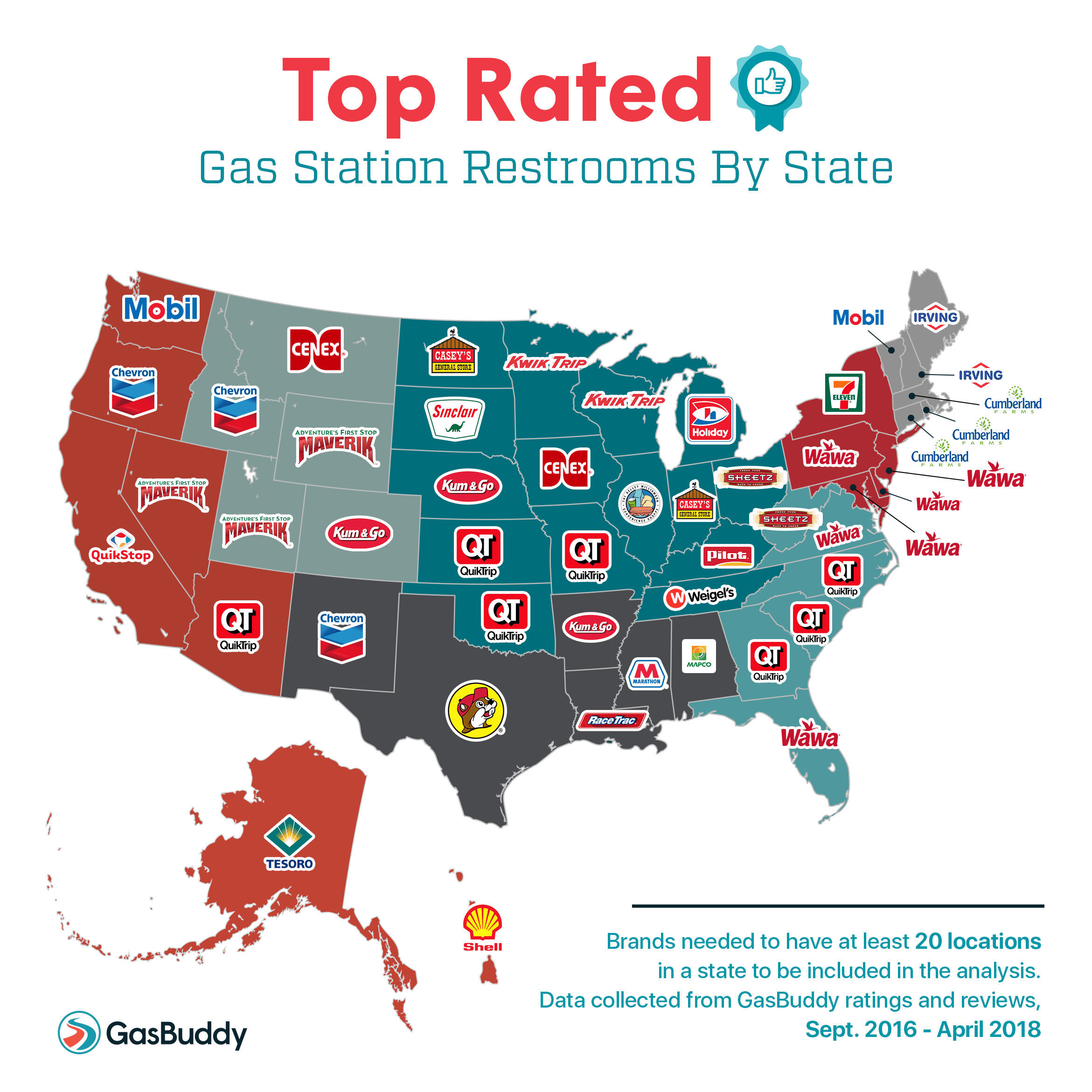 BOSTON – With peak summer driving season approaching and millions of Americans hitting the road, GasBuddy, the only smartphone app connecting drivers with their Perfect Pit Stop, today reveals which gas station brands have the highest-rated restrooms eliminating the stress and panic that often ensues when nature calls.

Oklahoma-based QuikTrip flushed the competition for a second year in a row in seven states, the most out of any other brands. Wawa came in second, leading in six East Coast states, followed by Chevron, Cumberland Farms, Kum & Go, and Maverik each topping the list in three states.

While QuikTrip captured the most states, Texas-based Buc-ee’s secured the throne as the brand with the highest-rated gas station restrooms in the nation.

Quality restrooms are a big concern for motorists. According to GasBuddy’s 2018 summer travel survey, 37 percent of respondents said one of their worst fears when road tripping is when nature calls and being unsure of where to stop for a clean restroom.

“We all understand the high level of stress when it comes to needing to use the restroom while on the road. According to our research, more than half of consumers said that a clean restroom is mandatory when considering where to stop,” says Frank Beard, convenience store and retail trends analyst at GasBuddy. “There are a couple of surprise winners in this year’s top-rated restroom results, which only further proves that consumers are taking note of brands that go the extra mile to keep their facilities sparkling.”

Ensuring restrooms are clean makes for better business. In a recent report, gas stations with above-average restroom ratings on GasBuddy saw a 33 percent increase in foot traffic compared to those with below-average ratings.

GasBuddy is a smartphone app connecting drivers with their Perfect Pit Stop. GasBuddy is the leader in crowdsourced information to help drivers find the best gas prices, closest stations, friendliest service, cleanest restrooms, tastiest coffee and much more. GasBuddy is the leading source for the most accurate, real-time fuel prices at more than 140,000 gas stations in the U.S, Canada and Australia. The Company’s B2B Retailer Software-as-a-Service (SaaS), known as GasBuddy Business Pages, provide Fuel Marketers and Retailers their best opportunity to maintain their station information, manage their brand, and promote to their target consumer audience.