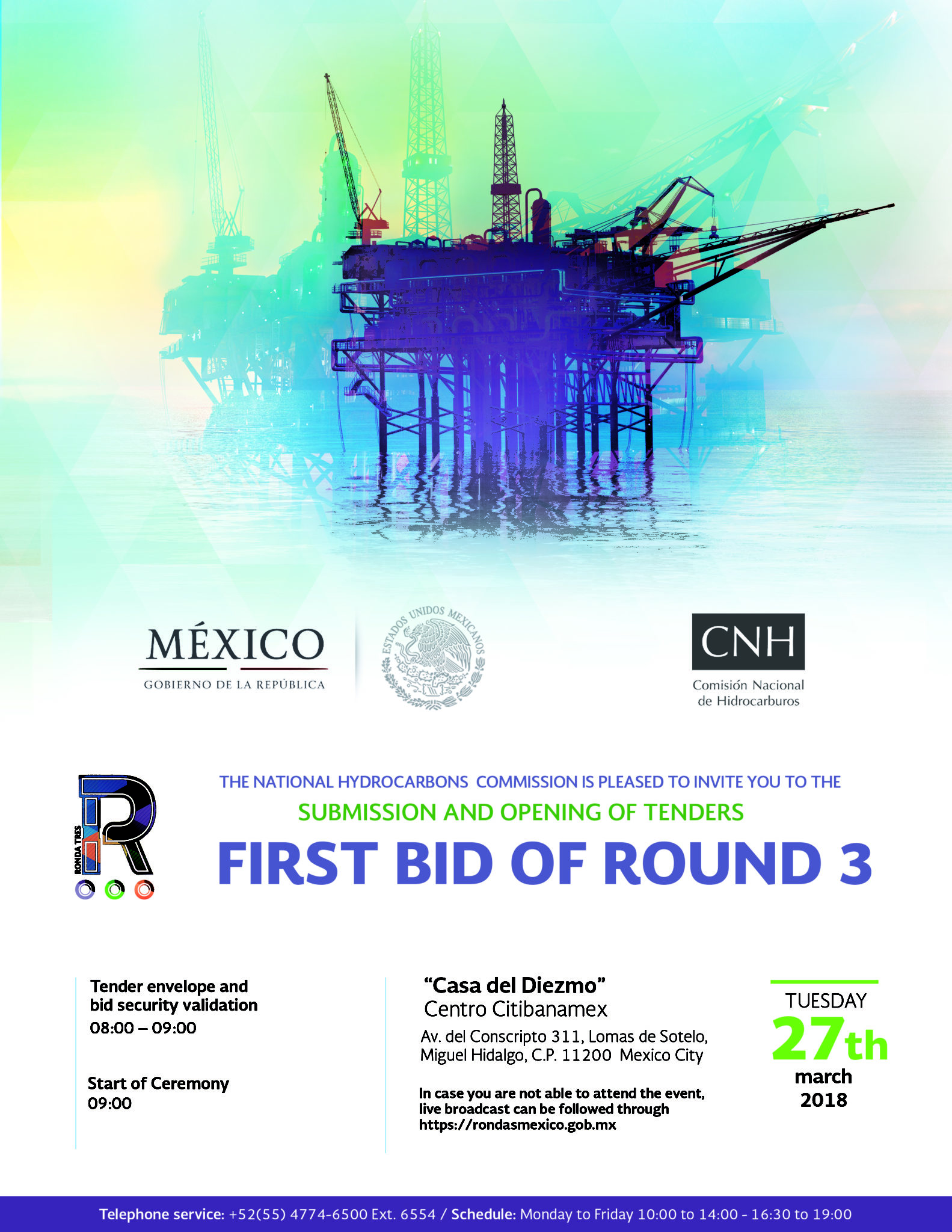 Today, the Opening of Bids and awarding of exploration and hydrocarbons production contracts for the First Tender of Round Three were held in a public session in a live transmission. The contractual areas tendered are located in oil provinces in shallow waters in the Gulf of Mexico: Burgos, Tampico-Misantla, Veracruz and the Southeast Basin.

18 bidders participated in the event. As a result of the process, 16 contracts were tendered to 12 bidders. The results confirm the interest of world-class, international companies in investing in Mexico, strengthening and making more competitive the country’s hydrocarbons sector.

Given that the tendered contracts are shared production contracts, they were awarded on the basis of the percentage of operating profit offered to the State, the additional investment and the amount of cash bonus offered by the participants.

On average, the government percentage offered in the winning bids was 45.8%. The winning bidders agreed to drill 9 additional wells and to pay cash bonuses of a total of $124 million dollars.

In addition, the contractors will pay taxes via a contract fee for the exploration phase, a basic royalty, and taxes on exploration and hydrocarbons extraction activities, as well as income tax. Taking this into consideration, the State will receive on average 72% of the value of project profits.

The contracts contemplate a progressive fiscal structure so that the State will receive a greater percentage of profits, estimated at 78%, in case of favorable hydrocarbons prices, cost efficiencies, or the discovery of volumes greater than those predicted.

It is estimated that the total investment across the contract periods could reach $8.6 billion dollars.

The contract tender awards will be finalized at the latest on April 2nd of the current year, in an extraordinary session of the Board of Commissioners of the National Hydrocarbons Commission. Contract signing will occur in the 90 days following the publication of the award decisions in the Official Journal of the Federation.

These results confirm investor confidence in our country as an attractive destination for long-term, productive investments, looking beyond current uncertainty in the hydrocarbons market internationally.

The results of the event, as well as the complete tender process corresponding to Round Three, can be consulted at the website http://www.rondasmexico.gob.mx.