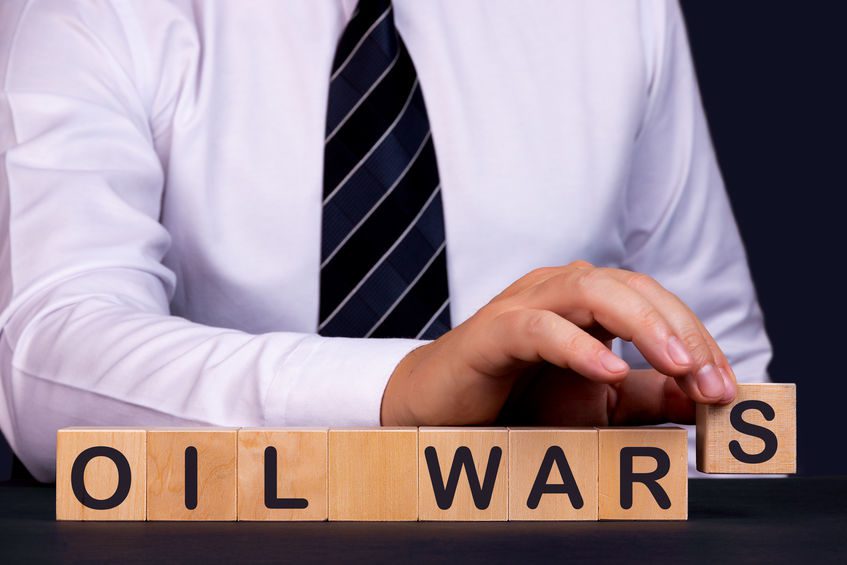 In March 2020, talks broke down between OPEC leader Saudi Arabia and Russia, which is not a member of OPEC. The two oil-producing countries met in Vienna, ostensibly to come to an agreement about the collapse in demand for oil resulting from the global COVID-19 crisis, a collapse that had already caused a 20 percent drop in oil prices by mid-March. Discussions centered on who, if anyone, should cut oil supply. Without an agreement, oil prices were expected to crash — so, of course, an agreement was anticipated.

However, talks broke down in a dramatic and unexpected way. When Saudi Arabia pushed for the most drastic supply cuts in more than 10 years, Russia pushed back by walking out of the talks. In response, Saudi Arabia slashed the price of crude, vowing to ramp up production. Russia refused to join in the price cuts, essentially destroying its always fragile relationship with OPEC. And oil prices plummeted, quickly falling to half their value from just two months previously.

There were no real winners in this drama — but one of the potentially hardest-hit victims was the U.S. shale industry.

Some energy strategists and other experts feel that Russia was explicitly targeting U.S.-based shale producers with its actions, even trying to cripple the industry, which is particularly vulnerable because of its heavy debt burden. Moscow’s defiance against OPEC combined with the flooding of the market with an oversupply of historically cheap crude oil is a slap at American sanctions on Russia as well as an effort to take market share away from shale oil producers.

Whether Russia’s actions were deliberately aimed at U.S. shale or not, the shale industry is dramatically affected by the Saudi-Russia price war. Extended low prices for oil are expected to result in massive bankruptcies throughout the industry. Companies with healthy balance sheets may be able to maintain production levels, but those leveraged with debt, as many shale producers are, will be especially vulnerable into 2021, as oil production falls by an estimate of more than 1 million barrels per day.

In late April, in fact, the WTI benchmark dipped below zero, down to -$40 per barrel. Shale prices recovered to rise above zero, but with a breakeven of $40 per barrel, that weak recovery won’t be enough to stave off bankruptcy for many in the sector, especially among companies pursuing growth despite shaky balance sheets.

Shale reserves still exist, so production is likely to grow again, but only after a rocky journey. Shale oil production was already expected to slow due to investor skepticism and capital constraints. The combination of the shock to demand caused by the COVID-19 crisis, with its concomitant slowdowns in commuting and air travel, and the shock to supply caused by the Saudi and Russian actions poses an even greater challenge. The only real choices available to shale producers are to increase productivity or limit production.

Well shut-ins are increasing throughout the industry, even though no one really knows what happens when a shale well is reopened after potentially months of being closed. Will the oil flow as freely as ever, or will attempts to restart the well come to nothing?

Without knowing that, many shale producers are opting for technological improvements and innovations designed to boost productivity while reducing costs. These include real-time deep imaging to improve hydraulic fracturing productivity, innovations in horizontal drilling and well design, use of smart microchip proppants that allow greater precision in real-time visualization of fracture networks, and improvements in drilling speed that reduce drilling time by up to 40 percent.

Continued innovation is necessary for the U.S. shale industry to survive the effects of the oil war. With luck, the industry can continue to boost productivity and reduce costs to regain its market share.