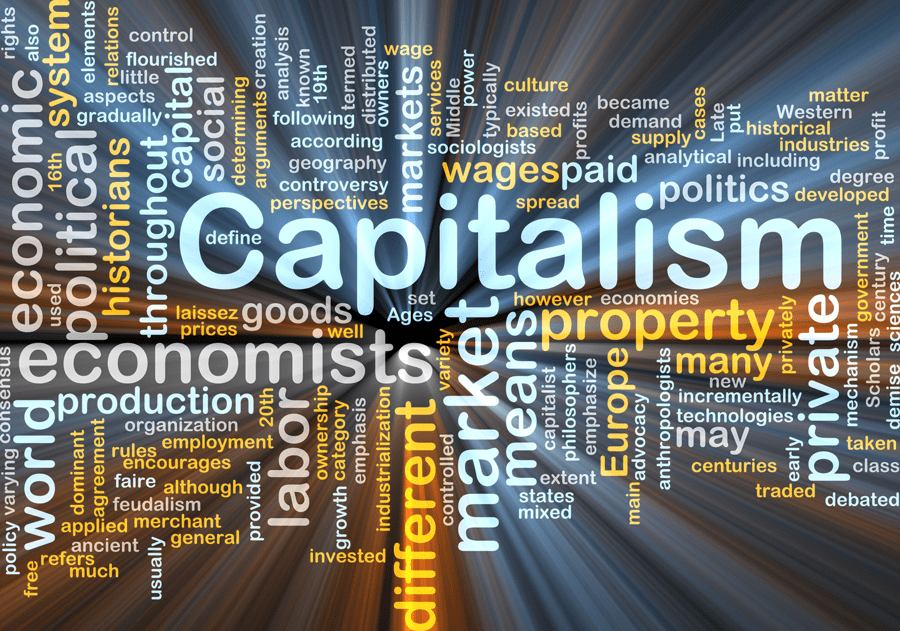 If you follow me at all (@roberthefnerv on Twitter or Linkedin), you know I’m deeply passionate about energy and that I have a deep respect for the pioneers who came before me. I do not have time to read or listen to fiction when there’s an endless trove of wisdom from the likes of history and authors like Vaclav Smil. The truth is, not much else is exciting to me.

Energy is not only a part of who I am, it’s been in my family’s DNA since 1902. So, when Secretary Kenneth Wagner, the Secretary of Energy & Environment for the great state of Oklahoma, asked me to speak to the Southern States Energy Board, I was beyond excited.

In case you aren’t familiar, the Southern States Energy Board (SSEB) is an interstate compact composed of governors and state legislators from 16 southern states, two territories and a presidential appointee. The Board’s mission is to enhance economic development and the quality of life in the South through innovations in energy and environmental policies, programs and technologies.

It recently held its 61st annual meeting in Oklahoma City and featured speakers like Continental Resources Chairman Harold Hamm, the CEOs of Nikola and Canoo and the governors of Arkansas and Wyoming, among other distinguished dignitaries.

“What would you like me to talk about?” I asked, to which he quickly replied, “Millennials.” I was in shock and didn’t immediately respond. Why in the world would he ask me to speak about that when I’m so passionate about the future of energy?! I finally came to and echoed, “Millennials?” to which he replied, “Yes, Millennials.” “Yessir, Mr. Secretary.”

Not long ago, when Secretary Wagner and I first sat down to break bread together, we found ourselves discussing energy policy. The conversation turned to the disparity of beliefs between the Millennial and Baby Boomer generations, which are significant, and for which I actually have some fairly strong opinions. I didn’t realize the impact I had sharing my opinions with a friend. Buckle up, though, Baby Boomers, you’re not going to like what you’re about to hear.

The thing is, I am 35 years old. That means I’m one of the mysterious creatures known as a Millennial. What is a Millennial? To a Baby Boomer, we seem to be a group of socialists and entitled young people who don’t appreciate anything that we have. While there’s always truth in your terse words, you’ve only scratched the surface.

A Millennial is someone who is part of the Unluckiest Generation in United States history. We earn 20 percent less than Baby Boomers, despite being better educated. Our education cost us 213 percent more than it did in 1980. Our health insurance costs 900 percent more, even though we are the healthiest generation in history. Vehicle insurance costs 50 percent more and maintenance costs 27 percent more – and that’s just in the last decade. Home values have increased by 73 percent since the 1960s (a value not included in CPI). Childcare costs account for 18 percent of raising a child today, up from 2 percent in 1960. Meanwhile, CEO compensation has grown 940 percent since 1978, while wages have only grown 12 percent. The average Millennial only has $8,000 in savings. (All numbers provided are inflation-adjusted.) 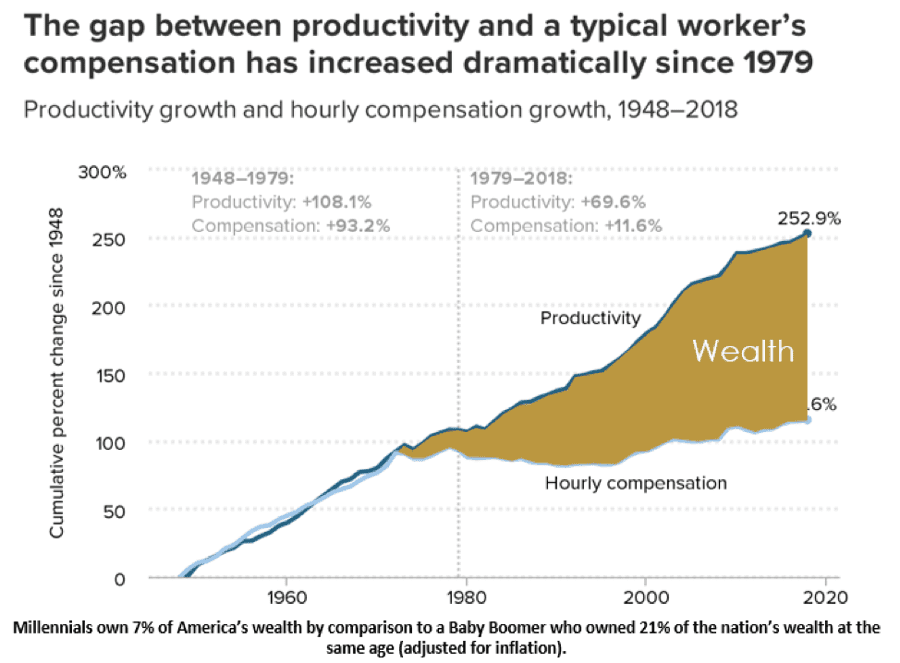 Millennials like myself graduated into the Great Recession and couldn’t find a job. Once the market was coming back, the 2012 down-cycle hit and then hit again during the OPEC price wars from 2014-2016. When Millennials were just starting to get back on their feet and find some semblance of consistency and climbing out of debt, COVID-19 destroyed the markets again, sending us back deep into the abyss. 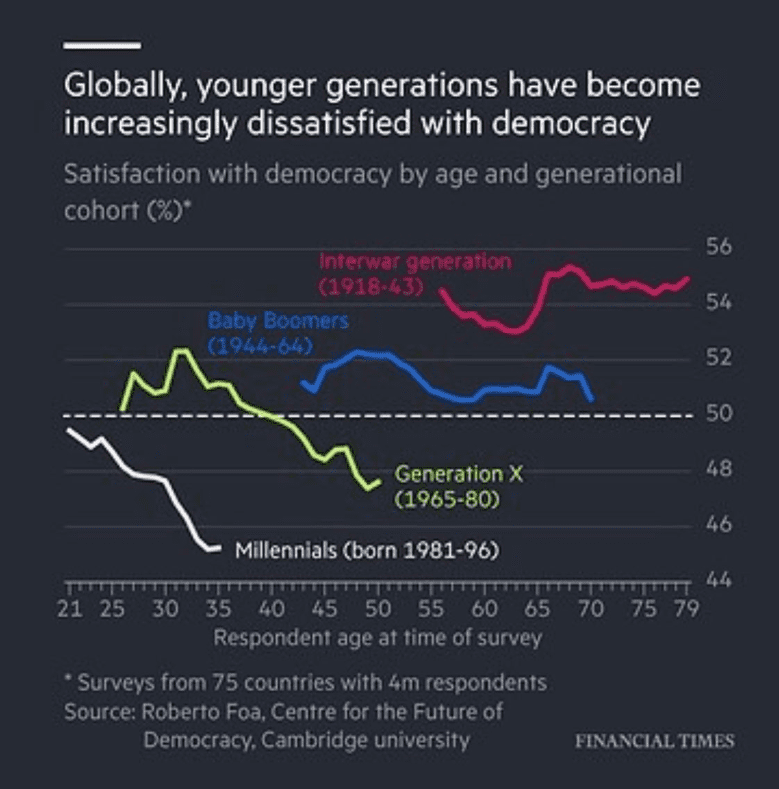 Yes, Millennials are more “socialist” than previous generations, but not because we want to be socialist. We are more socialist because capitalism has yet to work out for us, the largest voting population in the United States.

No matter how well-intentioned Boomer policies were, they have failed an entire generation and the American Dream is at risk if those in power (Boomers) do not heed this warning. As the Bible teaches, you shouldn’t be so quick to point out the speck in someone else’s eye when you have a plank in your own. Baby Boomers have enjoyed decades of leadership and power, possibly the longest tenure of any generation. Yet, they want to blame us for all the problems that they have created – a generation that has yet to have any real influence or be ascend into positions of power.

Do you blame us for being upset as we were forced to watch your generation bail out every industry that failed, lining the pockets of those (rich) closest to the Central Bank? That’s not even capitalism; that’s crony-capitalism. Why do you reward those who make bad decisions, lining the likes of Chrysler and GM and Goldman Sachs’ pockets with billions when they run their companies into the ground? In the oil and gas sector, Chapters 22 and 33 are now commonplace.

What’s even more commonplace is a lack of Millennials – both in your C-suites and, generally, among the workforce. Take me, for instance, someone who is sympathetic to the cause and knows that “fossil fuels” are the largest reason for human flourishing on this planet. You have largely ignored us. Worse yet, you call us names. Forgive us for not being there for you when other industries – no matter how phony – embrace us with open arms.

This isn’t just me, either. I was speaking to a man in his mid-30s displaced by the recent COVID-19 economy this week. This man is a military veteran and West Point graduate. He was one of the rare few who made it to the C-suite. He’s someone who loves the upstream oil and gas industry. He’s also someone who can’t get a job and doesn’t feel that the oil and gas industry values him anymore. There is no place in the oil and gas industry for a person who WANTS to be there? Let that sink in. ExxonMobil just shuttered two office buildings in Houston and is now spiking its pay to try and retain talent, yet a man with impeccable credentials, who I would hire without a second thought and who wants to stay in the industry, can’t get a job? What are you doing Boomers?

You sit in your ivory towers with wealth and power, but you choose to remain silent and fail to participate in public discourse. You hate the Twitter crowd, and the #EFT (Energy Fintwit) community. You punish anyone who speaks up and has a voice, slapping them down or firing them for providing dissenting opinions. Look no further than the bogus amount of reserves on your books. The system is fully and wholly broken.

It’s the people who have been in power for decades, the silent and private ones with wealth and resources at their disposal, that have allowed this energy crisis to unfold in the United States. Spiderman’s uncle [among others to whom this quote has been attributed] had some pretty solid advice for you, “With great power comes great responsibility.” As we reflect, it doesn’t appear that those with power have accepted responsibility. Instead, they’ve hidden in fear. Instead of rejecting passivity and leading courageously, they have shrunk into their bubbles, content with their wealth.

Who am I to criticize, though, when I wasn’t willing to stand up and do something about it? With no wealth or power to speak of, I’m already doing more than 99 percent of you. In February of this year, I stood up and launched Hefner.Energy and have been speaking up ever since. Rejecting passivity, leading courageously, accepting responsibility. I’m willing to say what people don’t want to hear; I’m here to make you uncomfortable.

I’ll go a step further [and ask], how successful have you really been? How hard was it for you to build wealth or financial security when the stock market grew at eight percent annualized during your entire professional career, since 1960? Are you smart and deserving of that? Or were you lucky to be handed such a wonderful opportunity? 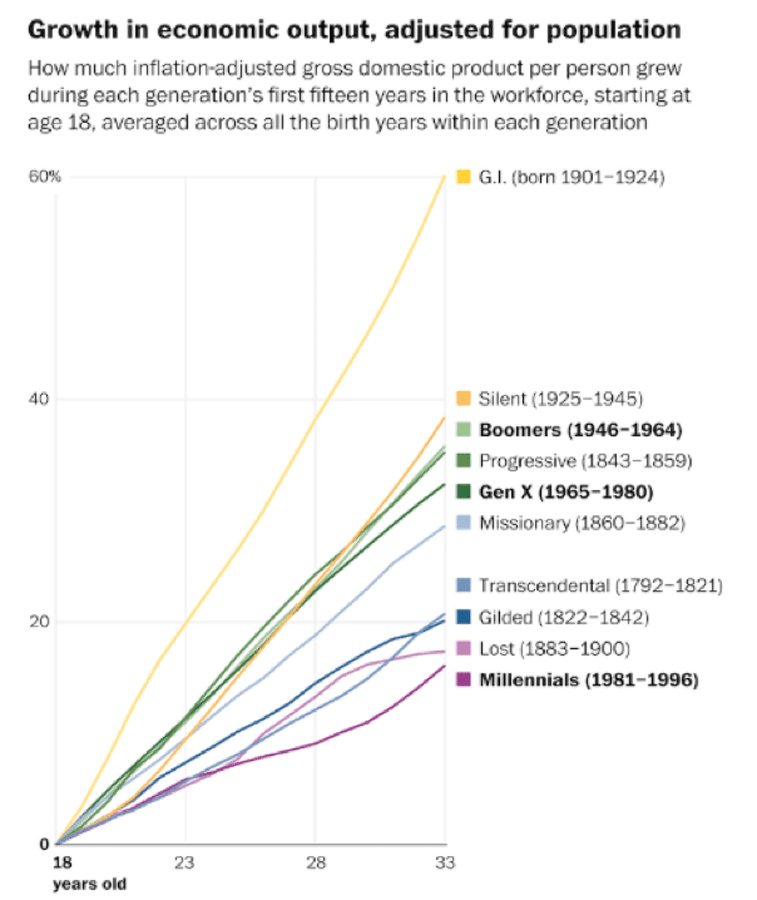 The reality for us is that we have yet to get back to zero. 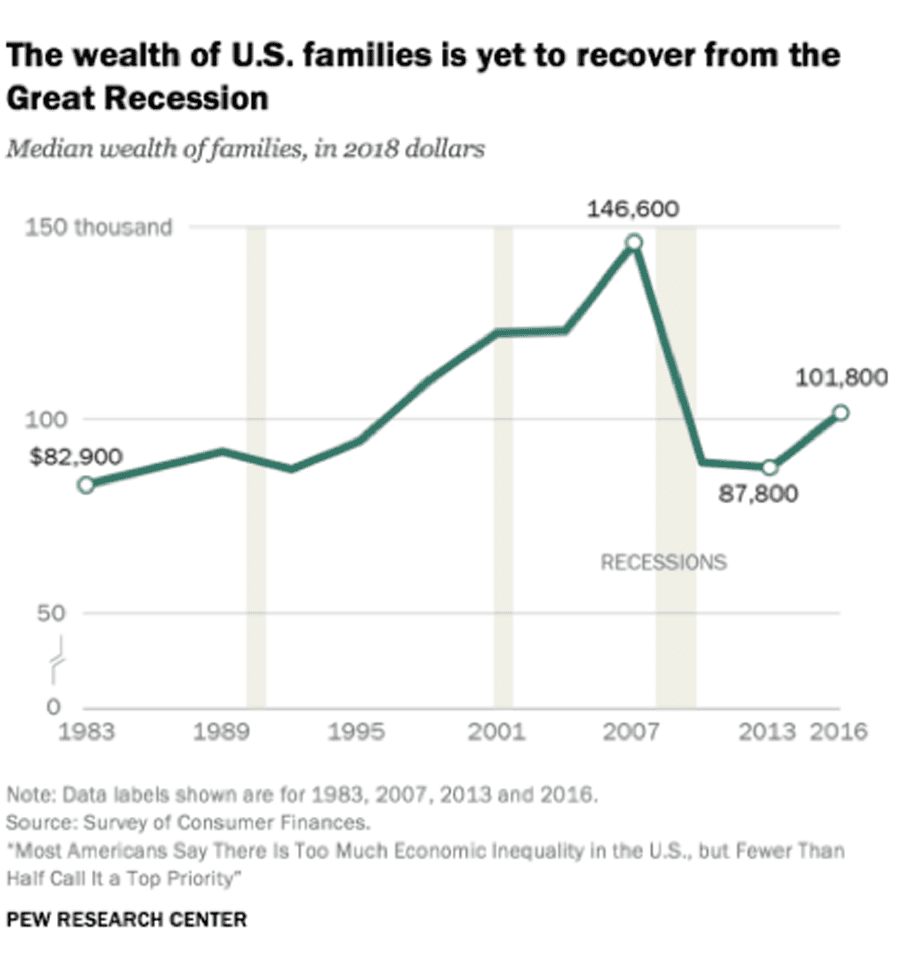 Are you the man who is willing to point out the speck in someone else’s eye while ignoring the plank in your own? Go look in the mirror if you are out there blaming Millennials for your failures, Baby Boomers. Go look in the mirror if you have been silent and on the sidelines while the climate industry has dismantled our entire industry. This industry needs to repent and champion Millennials and help get them back on track! It needs to join the fight and empower those whose voice now matters most – Millennials.

It shouldn’t be any surprise that companies like EQT are among the best companies in the upstream industry – it’s run by Millennials. Millennials aren’t lazy; we are hard-working. We don’t want to live at home with our parents, we are forced to. We aren’t socialists, we are just skeptical capitalists. It’s okay to care about and want clean, cheap, reliable energy. It’s also okay to want to be afforded the lifestyle that you enjoyed in the 1960s, when you could afford a middle-class lifestyle on a single income. 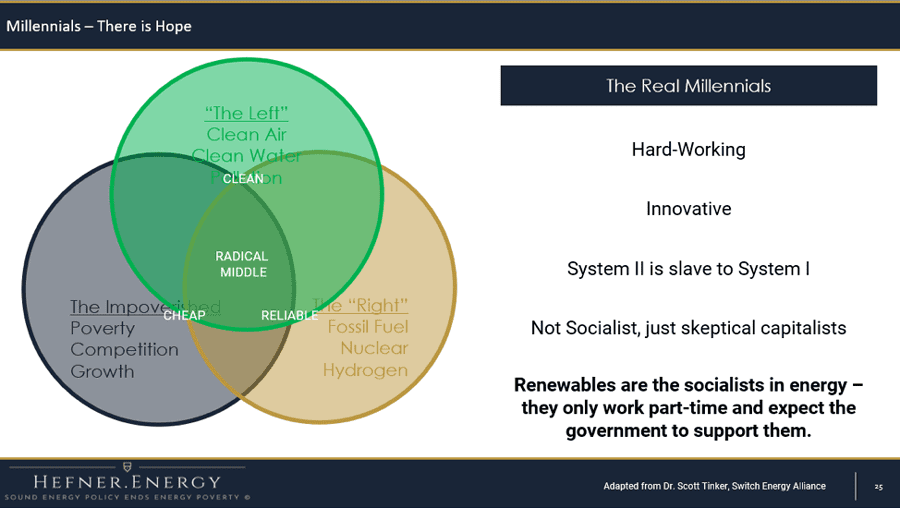 I’m 35 years old. I’m part of a subset of Millennials that bridges the old and the new; the ones that didn’t grow up with computers and cell phones and streaming services and the ones whose lives were quickly changed during the formative years to adopting the explosion of technologies. I’m someone who appreciates the history of oil and gas but one that also appreciates what the future holds.

If this industry wants to adapt and be able to attract people like me and my West Point friend (Millennials who WANT to be in this industry), it’s time that Boomers in control of the industry start evaluating their C-suites and board of directors and advisors for how many Millennials occupy those seats. If you’re really smart, you’ll focus on the subset of Millennials born from 1982-1986, who are the bridges between the old and the new. 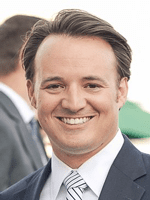 Robert Hefner V is a fifth-generation energy expert from a family that has influenced the energy policy of multiple presidential administrations dating back to the 1930s. He is an investor, author, speaker, and consultant.

Letter from the Publisher (November-December 2022) 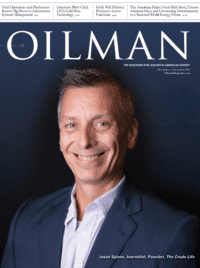