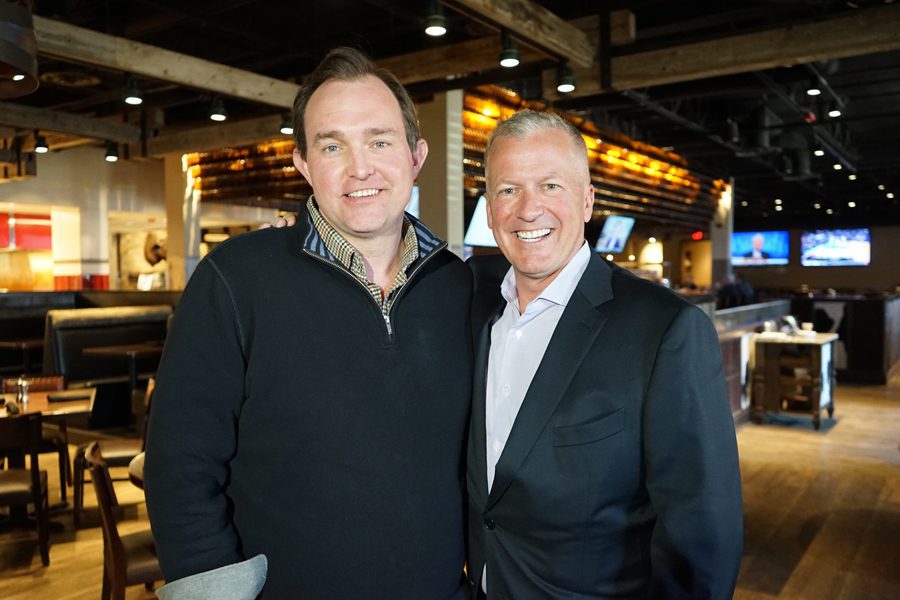 Jason Spiess: I did a story a few months back, and I specifically asked Lynn Helms and several other energy experts about rig timelines and they said 12-16 months. They have to look at long-term projections, raise capital and decide how much more money they can shovel into the shale play or cut bait. I wanted to ask you about some of the other shale plays. What are you seeing with the activity in other shale plays?

Brian Sullivan: Well the activity is down everywhere, but I will say this, the Permian Basin is probably doing the best out of all of them. Again everyone is hurting at this price point. The Permian is the oldest play; I think the Texas operators, or some of them at least like the Diamondback Energy and and Pioneer Natural Resources of the world, they saw it coming. They started cutting costs early. They can be profitable. Some of these companies told me they can be profitable under $20-a-barrel. Not much, but they are. In other words, they can continue to grow, maybe not to expand, but survive without problems.

Eagle Ford is a little more difficult; it comes up in price. Then you get these weird things like in the Marcellus in Pennsylvania; that’s a little more like North Dakota in that it is newer, more expensive land. You probably need a $60 number. You know more about that than I do, but when I talk to oil companies, as I have, and first off they are very reluctant to tell you where they are profitable. I mean no one is going to say $50 dollars and 50 cents. That just rarely happens if ever.

I asked a guy who was working a rig on one of the 33 remaining rigs that are up in the Bakken, he said $65 is a nice number. I trust him on it that $65 is a nice number. But around the country, sure $50 and $40 in some places to make money. If you are a late bloomer to this game, no matter where you are and you paid a lot of money for land and mineral rights, crews and didn’t manage your balance sheet right, you are in trouble. I said on my show (Power Lunch on CNBC) that $40 is not much better than $30 for a lot of these companies. At $40 they are losing less money, but they are still losing money. Look at Linn Energy, a former $14-billion-dollar company three years ago came out and said “we don’t know if we can exist.”

They used the term “going concern,” which you probably know is a business term, but they said something like, we are questioning our ability to continue is a going concern, which is an accounting term for “not sure we can pay the bills.” They defer to debt payment, and remember this was a $14-billion-dollar company three years ago. That’s why I got interested in this story. It’s not just that I enjoy oil and gas, which I do, but it’s the debt levels and debt angles that has not been told that was really understood a couple of years ago. And that’s why this is different than previous booms and busts. The amount of debt that was taken on by companies and individuals. I mean look at the state of North Dakota, they got a billion-dollar budget shortfall, how is that possible? Did they save anything?

JS: One of the reasons I became interested in the Shale Plays was the change and how something just felt different, much like how you gravitated to it. When I interviewed John Gibson, the former CEO and Chairman of ONEOK, he tells me these shale plays have them rewriting their business plans. Harold Hamm of Continental and James Volker of Whiting both alluding to the same thing towards their business plans and operations. When these men of that caliber started telling me they were re-writing their business plans, the first thing I thought of in all honesty was our industry. The media business. I have been in the media now for 25 years and when the Internet came around I had to literally rewrite my whole business plan multiple times. No one would pay for the Internet but you had to go online regardless. So how do you get them to pay for it? Then you started seeing newspapers like the Los Angeles Times declaring bankruptcy. A hundred years in business with a growing business model, then a new technology is introduced and within 10 years, bankruptcy. It became a game of who had the deepest pockets. So to me that’s what this shale revolution reminded of; this technology wave that is changing oil and gas to the tune to where they are revisiting their old way of doing business. Honestly it seems like a period where the deepest pockets win by waiting it out. Do you have any comments on my comparison and/or observation?

BS: You know I like the analogy actually and have never thought of it like that. But it’s pretty good. I guess the idea would be like this, to your point, media whether print or television, I guess it really doesn’t matter anymore because the point is the same — the whole industry has changed. I feel like with the oil producers it’s just a matter of time before the oil recovers and goes higher again. For us that’s like saying its just a matter of time before ad rates go higher again. What if they don’t. What if you have to operate your company like that. And if they do, great. If they don’t, well then you are prepared, but you can’t assume prices are going to go higher. I think we have recency bias, because oil has been over $100-a-barrel twice in the past five or six years. If you go back 40 or 50 years and adjust for inflation, the price of oil is $40 or $45. That’s where oil wanted to be in the ’90’s where it did nothing. Right? For at least most of the 1990s. So it is entirely possible, that just because oil has collapsed as much as it has it’s not going to recover. It may not and what if it doesn’t. And I think if you are running a company you have to have a budget and an operating plan that says what if oil is at $40 to $45 the next five years. How does XYZ corporation get through that? That’s what you have to do. The good news, I guess, people are going to learn how to operate much smarter. And if they can operate at $40 to $45, then if we see a turn, until labor rates go back up, that they are going to make some money and possibly grow. But if you don’t, you had better have your balance sheet in order. If you took on a lot of debt, or can’t renegotiate your debt or issue new equity or whatever it is, you are in trouble. That’s why I said $40 isn’t much better than $30 for some companies.

JS: I wanted to ask you about the Reverse Ripple. I did a story a couple of years ago about the Ripple effect the Bakken was having on the surrounding communities. Minneapolis was a quick and big economic benefactor to the Bakken because of its established markets and distribution channels. Other communities felt the ripple like Billings, Rapid City, the Black Hills and even Salt Lake City, Utah. Now there is a reverse ripple coming through. When it comes to the jobs that are being created and the jobs that are being eliminated because of this volatility of price. That’s my context behind the next question. What do you see or do you have any comments when it comes to the Reverse Ripple happening in these shale plays?

BS: OK, I have been very vocal about saying this; about a year-and-a-half ago I came out and tweeted and said that the drop in oil of this magnitude was bad for the economy. People were basically saying I was an idiot because low gas prices are good. Yes, low gas prices are good, but look at all the jobs that were created in this industry in the last five or six years. Keep in mind, this was the only industry adding jobs during the financial crisis. If you had a high school diploma, and wanted a job and were willing to bust your butt, and freeze it off as well, you got in a car and went to Williston from wherever you were, and you could make a good living if you worked hard for it. And during the financial crisis, this was the industry that was growing. We are talking tens or hundreds of thousand new jobs. And that’s why I’ve said, I do not think it is a positive for America. Just because we have cheap gas, people are not going to buy a home because gas is cheap. They may change the car they are driving, and drive more miles and maybe order an extra dessert at work. I am not saying it doesn’t matter, it does, but the hundreds of thousands of jobs are either going to be lost or have their pay slashed. It does have a negative effect as well. If you look at the national data, Texas and North Dakota had an outside impact on the data in America. And that is an important thing psychologically. So the Reverse Ripple to your effect is this — if you look at the data now, like we had retail sales data that came out this morning, and it didn’t look good, if you dug into it you saw that gas stations were the only ones that were down big. That’s because they look at total dollars and if gas is cheap they bring in fewer dollars. Now when you look at the monthly job numbers, the only industry losing jobs is mining, which is where the U.S. government put oil and gas, under mining.

It’s not going to bring America down, but it does make the data look weaker, and the data does reinforce psychology. It’s like if you had an A, B, A, A and then a D on your report card; you are really an A and B student, but you might have a C average all of a sudden. And that’s what oil and gas is doing right now, dragging things down and not making things look as good. And it matters a lot. 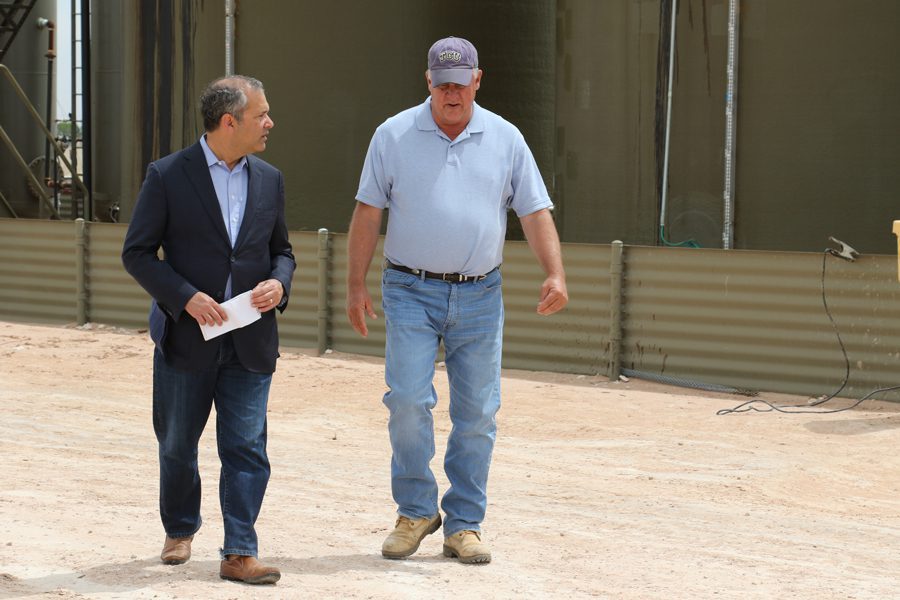 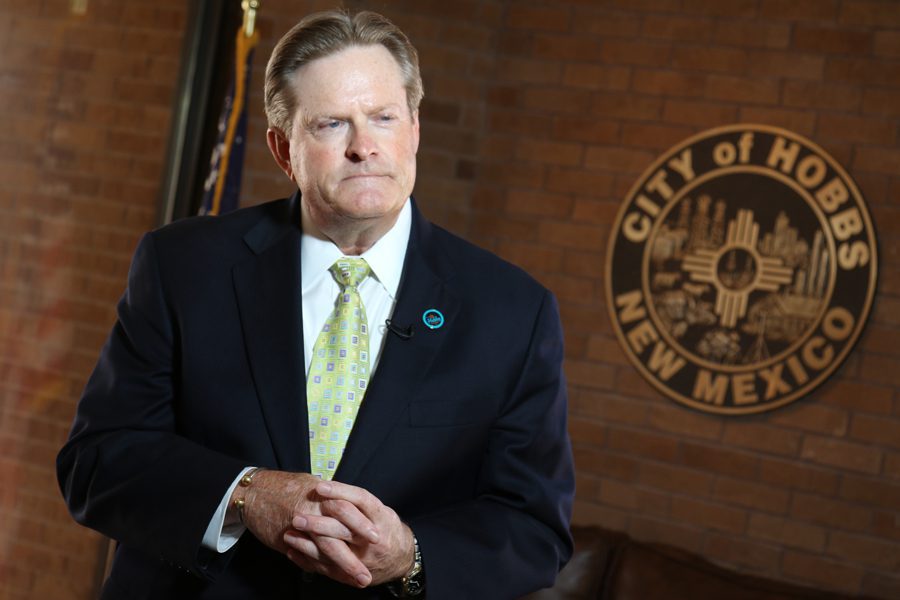 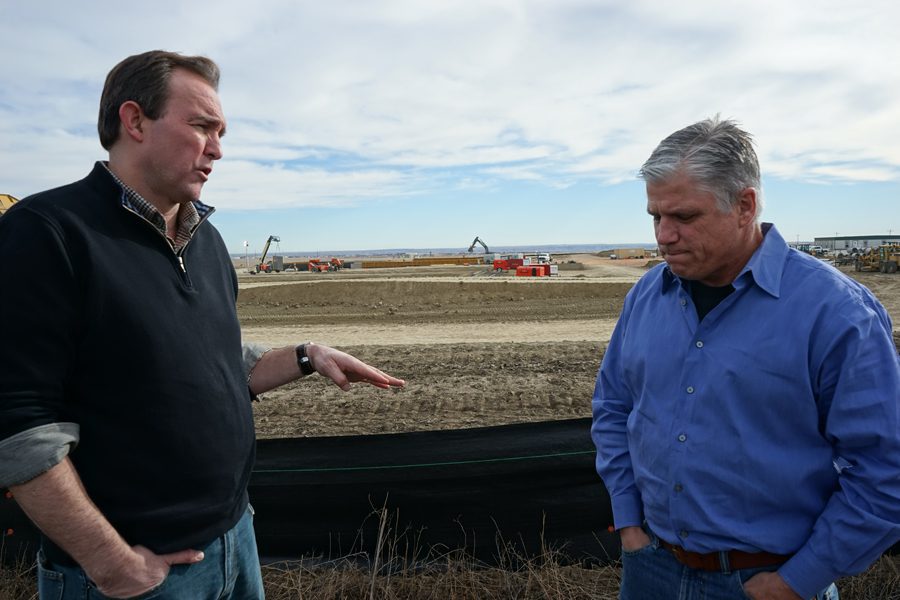 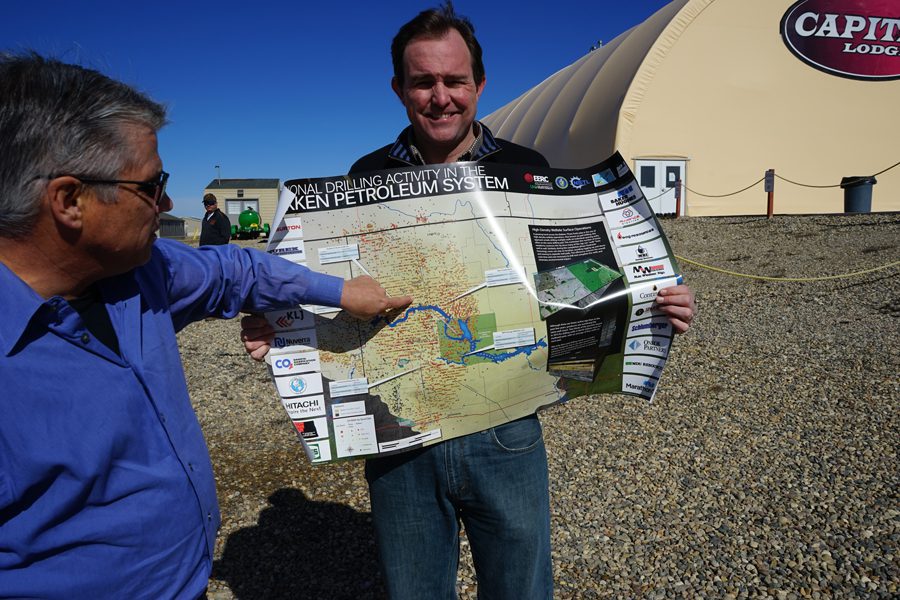 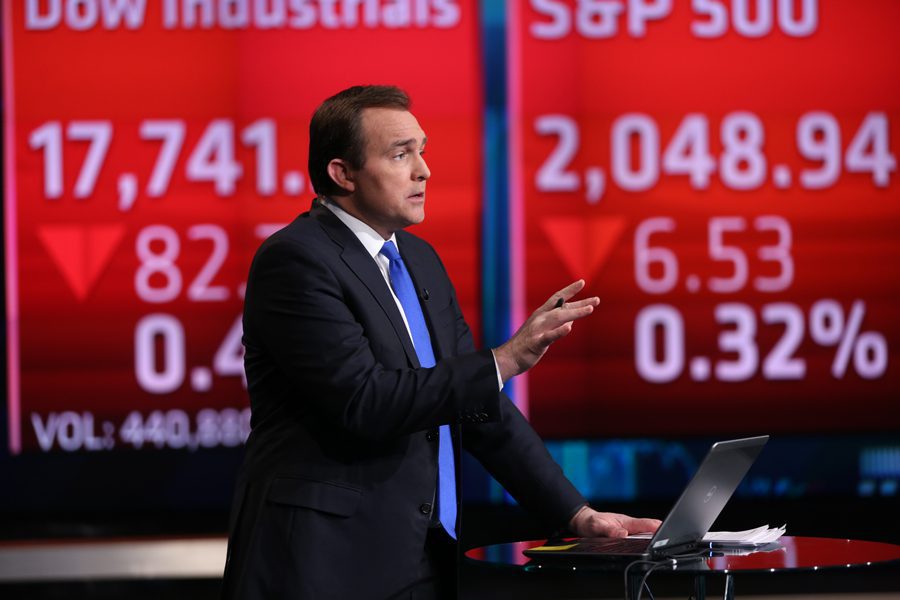 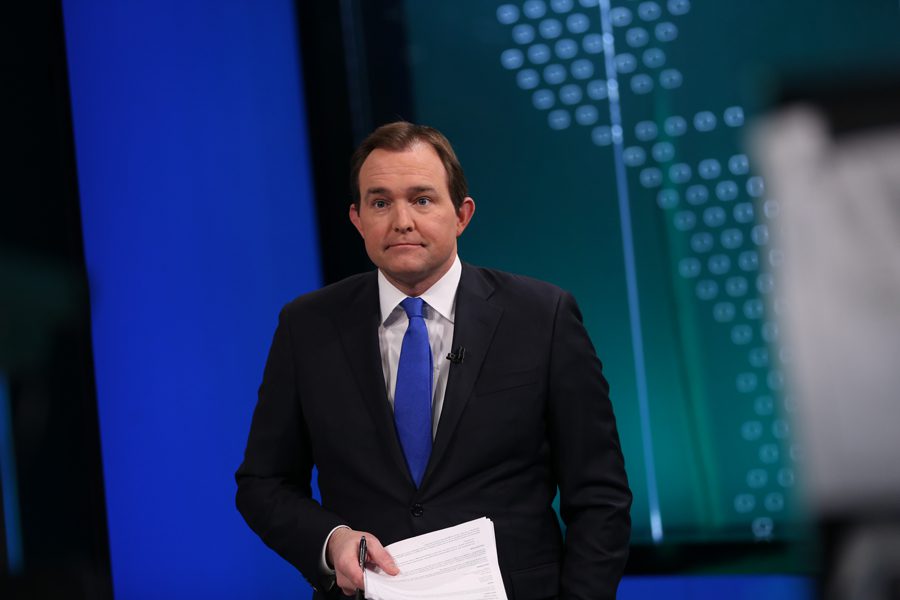 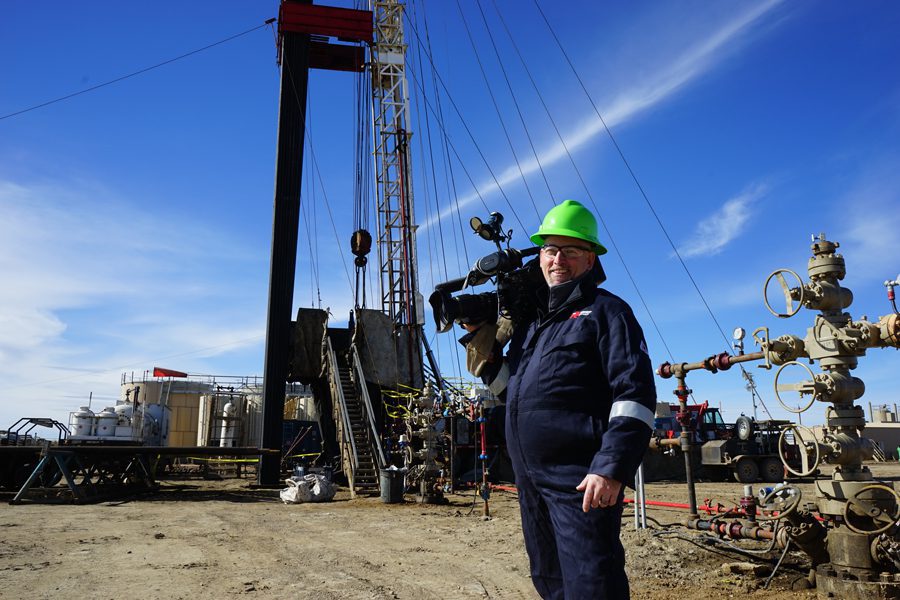 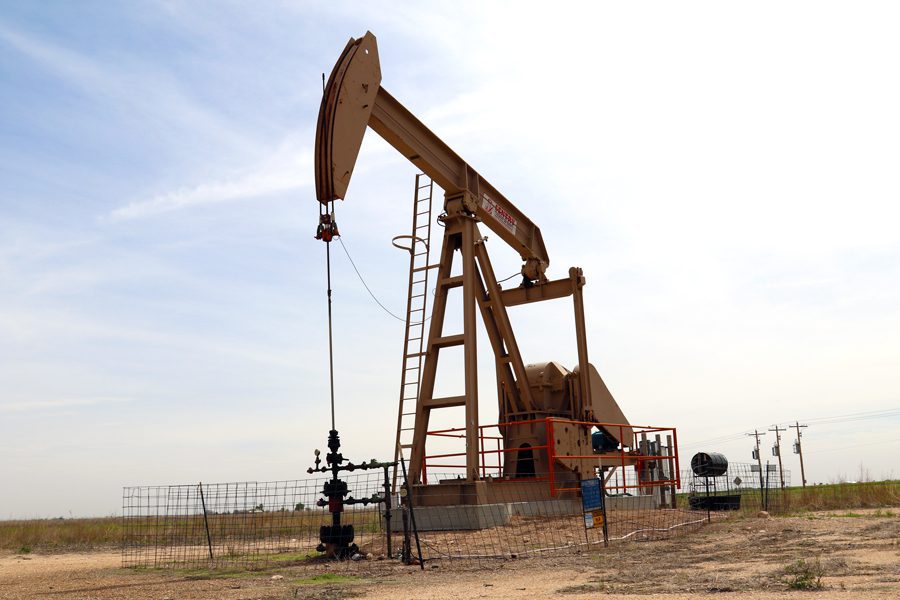