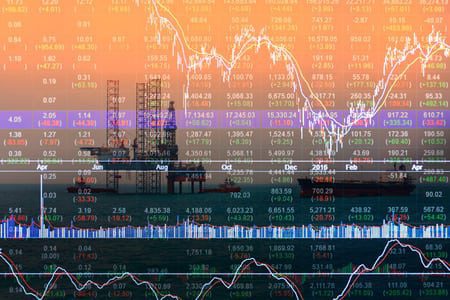 The EIA on Tuesday released its adjusted estimates of global demand and supply for oil, and the adjustments were not for the better. The EIA released its findings in the September version of its “Oil Market Report.” The EIA expects that oil will see a continuing slowdown in demand and an increase in supply, which means that the current market glut will continue well into 2017.

One of the issues detailed in the report is that the growth of oil in Asia has dropped greatly from its previous consumption. China and India, both large international consumers of oil, have reigned in their insatiable need for the black gold, and the corresponding countries which supplied this oil are now seeing their oil stockpiles building up.

Furthermore, OPEC, failing to reach any sort of production-freeze agreement, produced a record-teasing 33.47 mb/d in August. Output reached the highest level ever for Kuwait and UAE, and Iraq and Iran both saw increases in production.

OPEC and other oil-producing nations that are maximizing production are, perhaps purposefully, underestimating the effect they are having on the global economy. Pushing production to new heights may seem beneficial in the short term, but it will take a longer time for the market to rebalance and reach equilibrium, which will cause more strain on countries that heavily rely on oil. It is rather ironic, then, that the countries that are the most dependent on oil are the ones boosting output, essentially causing the low oil price.

All of this simply adds to the already-saturated oil market, which is why even if a production freeze could be negotiated between countries like Saudi Arabia and Russia, there would be a minimal change in the global oil supply. A freeze is a temporary fix to a long-term problem.

What is happening in the market is defying basic economics. A normal market will follow the rule that a decrease in the price of a product will be accompanied by both a decrease in supply and a surge in demand. “However,” the EIA noted, “the opposite now seems to be happening. Demand growth is slowing and supply is rising.”